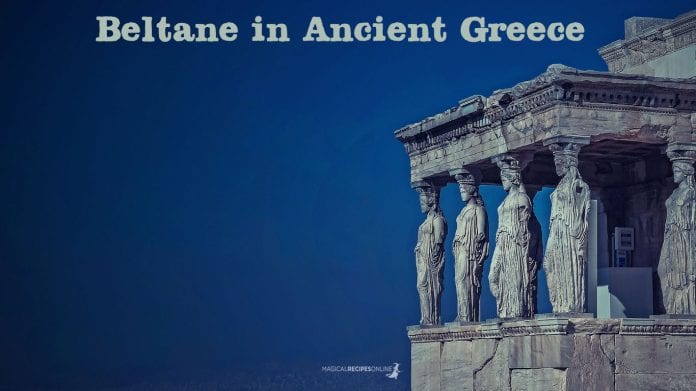 Beltane, the First of May is a very ancient Feast which has its roots deep in the most ancient religions of the World.

Here, in this article we are going to learn more about the customs and the magic of this Feast in Ancient Greece and Rome.

The name May (in Latin Maius) is the name of the third month of the Roman calendar – as by then the first month was March and not January – is coming, according to Plutarch, from the mother of Hermes, Maia or Maja (Μαία ή Μάγια), although this is not the only opinion on the matter. Therefore May was to honour Maia, who symbolises also the Mother Nature. But most of the Roman’s customs of the celebrations of May come from, or are additions to, the ancient Greek customs of the celebrations referring to the Greek month Thargilion (Θαργηλίων)

The celebrations of this month were honouring both Apollo and the Hores (Ώρες), and Dionysus.

Because of the celebration of Dionysus, songs were sung to celebrate the coming summer and the beauty of the nature and the rising of Dionysus was performed.

Also offerings to Demeter were performed, and a ritual banishing of poverty.

Even the Christians couldn't avoid the celebrations of May, so they embodied them in the religion. Giving the role of Dionysus to Christ and making the period of celebrations from the rise till the ascension of Christ. According to Christianity dead are on earth all this period, so many rituals to honour them are performed.

In nowadays, the rising of Dionysus or May still happens in many places of Greece, as a young boy performs the dead Dionysus, lying on the ground and maidens cry for him and put flowers on him till he finally rises and then the other celebrations begin.

The branches of cypress have become wreaths. There are numerous of theories of how these wreaths should be made. The most popular are two. If you want a wreath that would empower your magical powers and the magic in your life, you should make a wreath of seven different kinds of flowers, neither more, nor less. But if you want a general blessing, then a wreath must have garlic for protection from dead, undead, and evil spirits, a thistle (or any flower with thorns) for protection of all enemies and the evil eye, and cobs for wealth and good luck.

May, and the first of May is considered not only of great beauty, but of great magical power as well. Even the name Maja of the mother of Hermes is the some word as the word magic in Greek.

Remember that Apollo is the most handsome God, and master of all the arts including the spiritual arts, and he brings all happiness and love. And Dionysus is also a very happy God, although he focuses more on the earthly delights, and he is a very sexual God.

The magic of May can be beneficial or malevolent. There is a Greek blessing that sais “May you have all the goods of May”, and a curse that says “May all the hours of May find you”. So do celebrate the climax of Spring and do perform every beneficial magic for you and for others and also remember to protect yourself from any negative energy.

So do have all the goods of May! 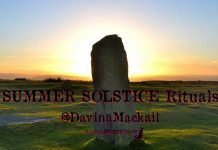