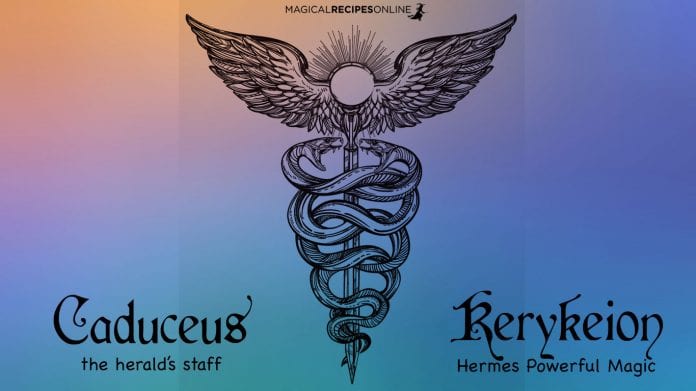 Interestingly, according to the most widely known legend, the Kerykeion was not in possession of Hermes at first, but Apollo’s.

Apollo is connected with the snakes/serpents by many stories. As the God associated with the Sun, Apollo the was the slayer of the monstrous dragon Python. In the Greek legend, Hermes stole the cattle of his brother Apollo and when he regreted his action, he gave him his Tortoise-shaped lyre. Apollo appreciating his gesture, gave in return the Kerykeion to Hermes. Hermes made this his major identifying symbol. Many Indo-European Sun Gods are depicted as dragon-slayers, symbolising enlightening. In Hinduism religion a version the Kerykeion is called Nagakals, seem to be a worshipping symbol representing one or two serpents. The serpents are mostly cobras and they are mostly worshipped in South East India.

According to another Greek tradition the Messenger God, the God of Intelligence and Merchants saw two snakes fighting (snakes symbolise wisdom). He settled their differences creating thus the Kerykeion.

The Kerykeion is a really significant symbol for alchemy, symbolising both the planet and the metal Mercury but also the wisdom of Hermes the Trismegistus, the patron of Alchemy and Wisdom.

Use the Kerykeion as a symbol for:

* Summoning the God Hermes, (for some is the patron of sorcerers). * for success in commercial purposes and wealth spells * for success in interviews and events when your want to amaze the crowds  * for Healing spells * for both to summon the dead and to banish them * for safe and successful trips and journeys * for gambling