Vampires: What about them?

In this first part about vampires and vampiric entities we are going to study the blood sucking kind of them.

Almost everyone knows the legend of Count Dracula and his vampires. The Irish writer Bram Stoker in 1867 published his book “Dracula” and from then on numberless stories about blood suckingvampires appeared in books, radio, cinema and finally television.

In the early stories they couldn’t afford the Sun, the view of sacred symbols – like the cross – the smell of garlic, and of course the holy water. 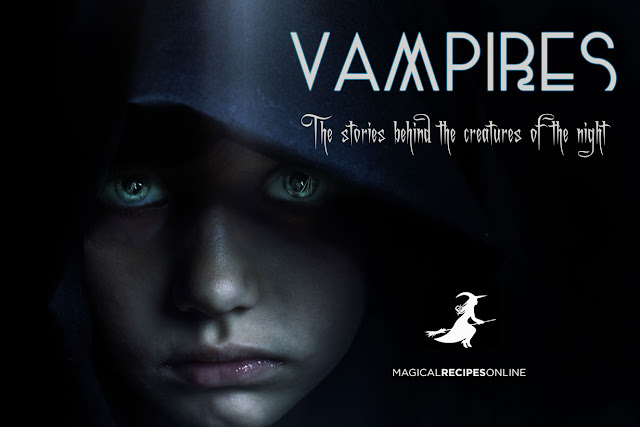 Most of the times, a vampire was “born” by the death of a human caused by a vampire’s bite. Also, to kill one, other than exposing them to the Sun, you should impale a stick to their heart.

Today, of course, there are many variations and differences from this first appearance of the vampires.

The question that occurs is if these undead humans really exist or even existed. To be honest I, thankfully, have never come across one of them nor I know somebody that has. Nevertheless, I don’t really find the possibility of their existence so unlikely.

Magic provides us with many tools, rituals and spells, both to protect ourselves from those blood sucking vampires and to avoid the rising of a dead as a vampire. There are even rituals to undo the vampiric existence of a known to us human who has not successfully died. The huge collection of such spells and rituals make me think that there should be a good reason behind their existence.

So, is the existence of blood sucking ex-human vampires a superstition or reality? You choose!

The Anglican Deacon, and latter Catholic Priest (although there are many who believe he never became a Catholic Priest), Augustus Montague Summers in his book “Vampire in Europe” has several stories of blood sucking vampires that he claims he has researched them and has come to the conclusion they are true. Now, from most of the stories that have a claim to be true, concerning the blood sucking ex-human vampires, I should say that those vampires do not have any beauty, super strength and, sometimes, not even the capability to endure any injuries. So, they are far away from the ideal we see in many famous films and TV series, such as The Vampire Diaries and True Blood.

Another historical figure that supports the vampiric existence is Elizabeth Bathory. Elizabeth Bathory was a Hungarian Countess who has lived during the late 16th Century. Even though we do not know if she was a blood consumer, she was believed to have killed an enormous amount of people in order to sustain her youth. Even today there are pictures which depict her bathing in the blood of her victims. The ultimate goal was to retain her youth as, according to a belief, the blood has regenerative properties.  Even in modern history, there are reports of mass murderers who were consuming the blood of their victims. Richard Trenton Chase bore the label ‘The Vampire’ by the media after it was discovered that he would drink the blood of his victims.

In 1992, Francis Ford Coppola raised Stoker’s Dracula in the homonymous film. This film gave birth to a more capable type of vampires. I should mention here that there is a story about a Haitian Loup Garou that has almost the same capabilities as Stoker’s and Coppola’s Dracula. I must say here that loup garou actually means werewolf in French.

Although the story names as the vampire (or loup garou) a certain military officer, there is no actual proof that the beast was really him. The only fact that supports this opinion is that this officer lived – when he was alive – in the house where the vampire usually appears. The locals want to believe that he became the supernatural undead, but nonetheless, there is no reason to assume this. In my opinion, if the story is really true, this Haitian vampire is a kind of immaterial or demonic vampire. And these demonic vampires are another case of blood sucking vampires.

These vampires are not undead nor were they ever humans. They are spirits in form, capable to materialize in several human and monstrous forms. Even more, they seem to need these forms in order to suck the blood of their victims. Haitians believe that these monsters prefer the blood of children, but this is not the general case around the world.

The idea of such vampires is much more ancient than the one of the human blood sucking vampires. Even in the Vedic ages such demons exist. Although there are different options about when the Rig Veda was written, it is easy to prove that it talks about times as ancient as 22000 BC, from the astronomical data it gives. So, we can assume that during those ages people already believed in blood sucking vampiric demons.

Although these vampires are the most well-known, and most feared by the believers, they are not the most common ones. Energy sucking vampires are much more common, and more people believe in their existence. To learn more about them read our post on psychic vampires.

That’s all. Have fun, and keep yourself away from vampires.

This is a Test to see if you are a Vampire’s Victim! Answering your requests one

There is a vampiric monster, common to many nations, known with almost the same (phonetically) name.

The Psychic Vampires the lore, the truth and how to Recognise them Although there is not

Welcome to another Lesson of our School of Witchcraft. Tonight, we will
Who hasn’t asked for good luck? All human beings at some point
In all the Lore of Witchcraft, there are some creatures that have
The year 2019 will be significant for the research into whether psychic
Demons, demonic spirits or demonized: what pops up in your mind when
Go to Top

This is a Test to see if you are a

There is a vampiric monster, common to many nations, known