Vedic Astrology
Mars and Lord Kuja (Mangala)
In Vedic Astrology planet Mars has a male nature. It also considers Sun, Moon & Jupiter as Friends, Venus and Saturn as Equals & Mercury and Rahu as Enemies. Remember that Moon considers Mars as Equal. So, the relation of Moon towards Mars is neutral while the relation of Mars towards Moon is positive.
Mars’s colour is red and its stone is the red coral (and secondary all the red stones including the Sun’s ruby), its metal is copper (and also rules gold, iron and steel; in western astrology Mars’s metal is iron, and steel while copper is metal of Venus), its season is Summer and its element is Fire.
Mars owns both Aries and Scorpio, having more power over the first 12 degrees of Aries, or as a Vedic Astrologer would say the first 12 degrees of Aries is Mars’s Mooltrikona. Mars is exalted in Capricorn having its greatest exaltation on the 28th degree of Capricorn and it is depilitated in Cancer having its lowest depilitation on the 28th degree of Cancer.
Mars governs the sex organs, bladder, muscular system, head, face, the left ear and the sense of taste. It also rules the animal instincts, self confidence, power and endurance, determination, sex drive (especially for men), and inventiveness. Sometimes it also rules occultism. Mars is also symbolises the siblings, especially younger brothers.
Mars is considered malefic & gives arguments, pressure, cuts and accidents, debts, and several other problems, but also gives the will power, determination and energy needed to overcome all of the problems he causes.
In the second house, Mars will be helpful in money matters but otherwise, will give problems in education, bad health (especially concerning eyes, face form and problems related with food), and bring contact with mean and unethical persons.
In the sixth house Mars will give fame and success, children, and money, unless it is related with a malefic. And finally in the tenth house Mars will be calm, giving good life and an interest in meditation.
The Gods who are associated with Mars are Lord Kuja (also under the names Mangal, Mangala, Angaraka, Bhauma), Lord Skanda (also under the name Kartikeya), Lord Narasimha (the Man-Lion Avatar of Great Lord Vishnu), and the Earth Goddess Bhumi (or sometimes the Earth Goddess Prithvi, who is possible to be a form of Bhumi or vice versa). The Graha is Lord Kuja.
There are several opinions of how Lord Kuja was born. Some consider him as son of Lord Brihaspati and some consider him as created by or incarnation of Lord Hanuman. The most well accepted theory though is that Lord Mangala is fathered by Great Lord Siva, having as Mother the Earth Goddess Bhumi (and therefore the name Bhauma, meaning son of Bhumi), without sexual intercourse.
Great Lord Siva was meditating and from his forehead three drops of sweat fall on the ground, and a fiery red and very handsome God was born, Lord Kuja.
Lord Mangala has one head, and four arms, holding a Trishula (trident), a mace, a spear and a lotus flower, but also he can hold an axe or a sword, and maybe instead of having a lotus flower he may give blessings with his forth hand. In sort, he holds three weapons and with his forth hand holds a blessing symbol or is open to bless.
Sometimes Lord Kuja is considered to be the same as Lord Skanda, but this is not correct, although there are many similarities between these two sons of Great Lord Siva, and Lord Skanda is almost as strongly connected with Mars as if he was the Graha God. I am going to post an article about Lord Skanda as soon as possible.
Some consider Lord Mangala to avoid sex and women, but this is more because of his identification with Lord Skanda, while there are many stories describing the sexual intercourses of Lord Mangala with mortal (or not) women, and also many statues in his sacred places shows him with (or in union with) his wife.
Like Lord Agni, Mangala’s vehicle is a ram (considered to be a young ram, most often of dark colour), and the upright triangle is sacred to both of them.
One should call upon Lord Kuja to:
* Avoid the malefic influences of Mars and magnify the beneficial ones.
* To gain courage and self confidence.
* To help in curing problems of the eyes and eyesight.
* To become stronger (muscular strength).
* To overcome enemies.
* To gain sexual virility as well as to undo the abuse of his own sexual energy.
* To overcome any problem.
* To pay debts and overcome financial problems.
The number of Mars is 3 so the Magic Square (yantra) of Mars starts with 3. 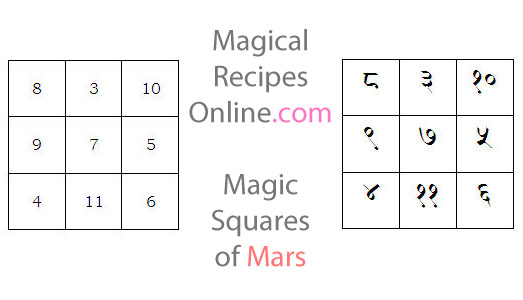 The simplest mantras of Mars are:
Om Mangalaya namah(a)
Om am Amgarakaya namah(a)
Om kram kreem kraum sah Baumaya namah(a)
Repeat the mantra for one mala (108 times) or five or seven malas each time for 21 or 92 days starting on Tuesday holding, or over, the yantra and/or a red coral (or other red stone you prefer). Alternatively, perform the ritual for 21 Tuesdays. It is said that if this is done, all malefic influences of Mars will vanish.
If you prefer use the yantra with the triangle instead of the simple magic square.
support the FREE ONLINE MAGAZINE ON WITCHCRAFT,
Magical Recipes Online