Although in everyday speech we consider these two words to have the same meaning, in spiritualism and alchemy those two symbols, labyrinth and maze (sometimes called Daedalus from the architect of the Minoan maze) have a different meaning and help us in different ways. So what’s the difference between the Labyrinth and the Maze?
The Labyrinth has one starting point, a middle area and an ending point being it the same as the starting one or opposite to it. While the routes of a Labyrinth seem to be chaotic turning other times left, and other times right, circling the centre coming sometimes closer and other times farer from the centre, in fact the route is secure. Nobody would ever get lost in a Labyrinth cause it has only one route that securely and surely will take us to the centre of the labyrinth and then out of it. We just need to follow this one route, and of course there is no other to follow anyway.
On the other hand the Maze has one or more starting points (the ones used for meditation have one), one ending point, and sometimes a middle area (especially the Minoan Maze, according to the myth, has one starting point and a middle area, but the only way out is from the beginning of it). If a middle area occurs, the way out of the Maze from there on is usually as simple as a straight line. But, inside the maze there are many routes and many choices, most of them leading sooner or later to a dead end, and always only one choice is the correct, that is the one that will lead us to the end of the Maze. 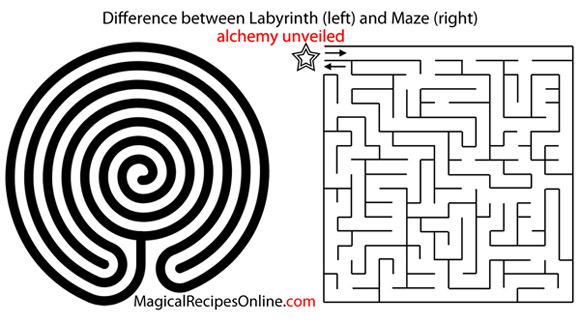 The Labyrinth teaches the mind to manoeuvre and to observe the situation from different points of view. As the centre is us, the divine, or anything we believe it to be, by going to the centre of the Labyrinth we are coming to a better understanding of our present situation or ourselves. By coming out of the Labyrinth we are getting released from our problems we may have and head towards a better present. Also, as the route of the Labyrinth is certain, we don’t need to try to find the solution, just trust the divine power, the flow of life, or anything we believe in to lead us, we just need to give in and surrender, and everything is going to be fine.
The Maze teaches us a slightly different lesson. The turns of the Maze also teach our mind to manoeuvre, but the variety of choices we always have teach us to see the many choices we have in every situation we may be. In every turn and every crossroad we have to choose our way, and maybe it is correct or not. Maybe we’ll have to go back, where we made a choice in order to choose now a different way of acting. If there is a middle area, finding it is the objective as the way out of the Maze then it will be easy, if there is no middle area, finding our way out of the Maze is the objective. Either way, no matter how complicated the root is, no matter how many correct and wrong choices we have made, when we will have found our way out of the Maze, we will also have found our way out of the problem we may have.
There are some Mazes that have a simple rule that if we follow it we will surely go to the end of it (or of course if we now perfectly our way to the particular Maze). In that case the Maze will have become a kind of Labyrinth, in which, although we have many choices, we know the correct one in every case.
Walking through a Labyrinth or a Maze, or even following their routes mentally on a picture of them, doing it in a slow and relaxed attitude and letting your spirit fly, is very enlightening. The objective is not to solve the Maze or get out of the Labyrinth as soon as possible. The objective is to understand yourself and your situation better and find your way to evolve! 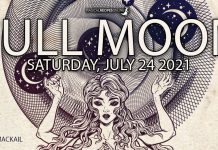