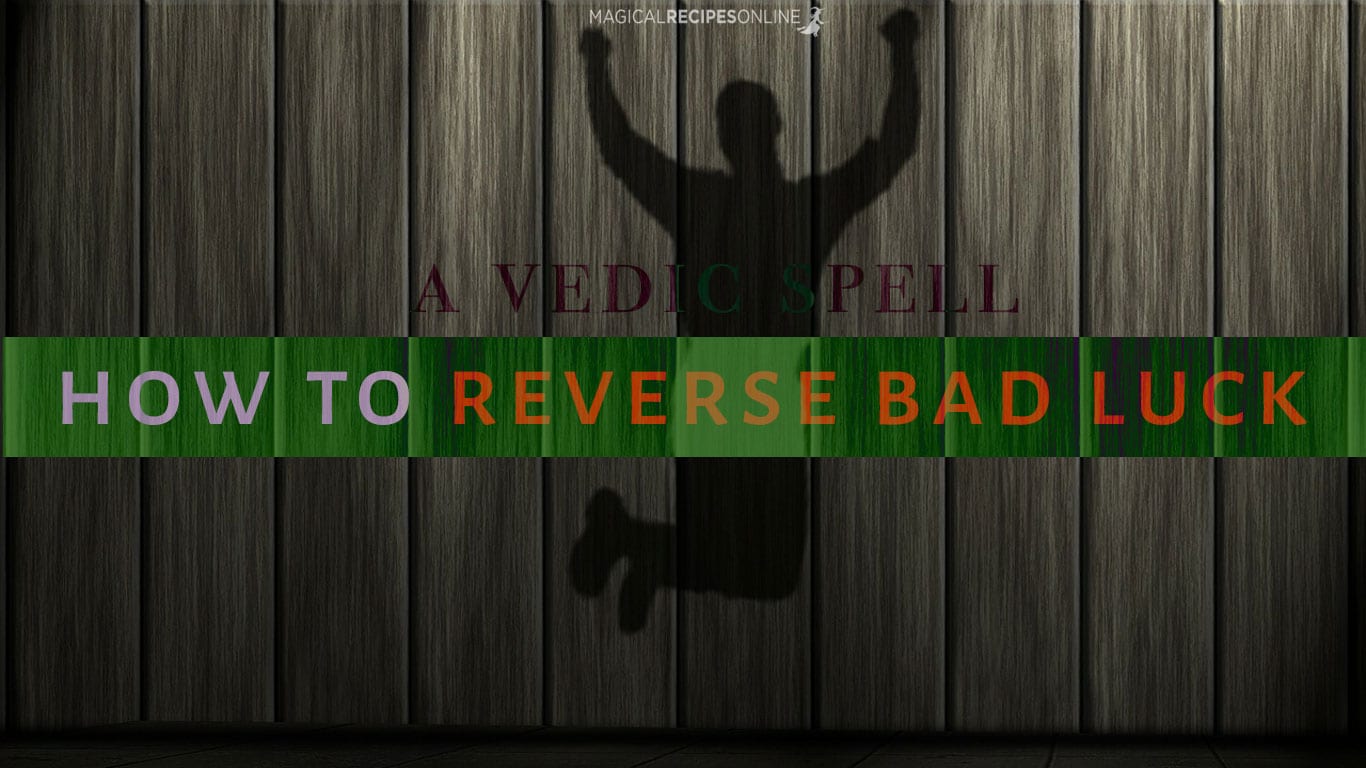 The spell I am going to give you is based on the Atharva Veda and the 18th hymn of its first book. The purpose is to drive away the misfortune and to obtain all kinds of blessings. The translator of Atharva Veda, Ralf Griffith, assumed that the blessings should be of money nature, but in fact the hymn doesn’t state that.

I am going to give you the hymn, as translated by Ralf Griffith, and then some ideas about how to empower it and how to adapt it to your pantheon or philosophy and to the folkloric beliefs of your area.

The Vedic Hymn to drive away misfortune and obtain all blessings:

We drive away the Spotted Hag, Misfortune, and Malignity: All blessings to our children then! We chase Malignity away.

Let Savitar, Mitra, Varuna, and Aryaman drive away Stinginess from both the hands and feet: May Favour, granting us her bounties, drive her off. The Gods created Favour for our happiness.

Each fearful sign upon thy body, in thyself, each inauspicious mark seen in thy hair, thy face, all this we drive away and banish with our speech. May Savitar the God graciously further thee. Antelope-foot, and Bullock-tooth, Cow-terrifier, Vapour-form, The Licker, and the Spotted Hag, all these we drive away from us.

How to replace the Gods:

First of all, the Gods that are summoned are Savitar, Mitra, Varuna and Aryaman. All are sons of Aditi, and therefore, all are solar deities. Now, for those serving the Universe, Savitar should be the Sun. Mitra and Varuna (keep the duet) should be Light and Darkness, or Fire and Water. Finally, Aryaman should be the Stars.

Now, although Varuna is a solar deity, and by himself is brilliant, together with Mitra, he adopts the more dark aspects, while Mitra adopts the brilliant ones. Together with Mitra they are the keepers of the Law and protectors of the World. When they are called together Mitra would symbolise, Day, Light, and Fire, while Varuna Night, Darkness and Waters (the heavenly ones).

Aryaman is more connected with the Milky Way, therefore in this incantation symbolises the Stars.

So, if you want to summon the Universal Powers, call them as we explained. If you want to change the pantheon, call the deities of your chosen pantheon according to their universal correspondence.

For the Greek Pantheon, you can choose one of these groups:

Helios for Savitar, Apollo and Artemis for Mitra and Varuna, Night or the Stars for Aryaman.

Apollo for Savitar, Castor and Pollux (correctly in Greeks pronounced Polydefkis – Πολυδεύκης) for Mitra and Varuna, and Artemis for the Aryaman.

Although the second group does not obviously correspond perfectly to the Universal aspects, it corresponds better to the nature of the Hindu Gods of the hymn.

The Favour is the Holly Grace, of course.

How to change / alter the symbols of blessing and misfortune:

The symbols of misfortune are Antelope-foot, Bullock-tooth, Cow-terrifier, Vapour-form, The Licker, and the Spotted Hag. Now, for Antelope-foot Greeks would use Κατσικοπόδαρη (Goat-Foot) while English would use Padfoot. The Bullock-tooth in Greek would be Στραβοδοντού (the one who has crooked teeth), but I don’t know of a similar symbol of misfortune in England. Vapour-form can be the Ghosts. Spotted Hag could be the Shtriga. the Licker can be the Succubus and Incubus. I don’t know what about the Cow-terrifier, but chose a forth symbol of misfortune.

Finally, the first verse says “All blessings to our children then!”. Now, the Veda usually express the maximum blessing as the blessing of our children, for if the children are blessed, the parents should be blessed too. But, you can say “to our house” or “to our family”, or something alike, according to your needs.

How to use the Spell to Reverse Bad Luck:

You can use this hymn as is, whenever you need it. If you want to empower the spell do it daily for a week or three, by reading it three times each morning or each evening, while burning sandalwood and lavender.

In addition, you can read more about how to bring Protection, Wealth and Prosperity in your life in this follow up article for the Reverse Bad luck Spell!