In Vedic Astrology planet Jupiter has a male nature. It also considers Sun, Moon and Mars as Friends, Saturn and Rahu as Equals and Mercury and Venus as Enemies. Now remember that Moon considers Jupiter as Equal and so does Mercury.
Jupiter’s colour is yellow and its stone is the yellow sapphire and also topaz and generally any yellow stone can serve as Jupiter’s stone. Its metal is gold, its season is Winter and its element is Ether.
Jupiter owns Sagittarius and Pieces. It is exalted in Cancer, having its greater exaltation on the 5th degree of Cancer, and it is depilitated in Capricorn, having its lowest depilitation on the 5th degree of Capricorn. The first five degrees of Sagittarius is its most beloved place.
Jupiter governs the whole circulatory system (blood and blood vessels) but the heart which is under the Sun, the liver and the thighs. Also some consider the brain under Jupiter rather than the Moon. It also rules theology and philosophy, science, reasoning and the ability to compare. It also rules the finances and everything that has to do with people and places abroad.
By nature Jupiter is beneficial, the most beneficial planet. Jupiter in general offers good luck, good health and wealth.
In the first house if Jupiter is in his houses or in Cancer, it will give all his blessings, including wisdom, good luck, fame and a great interest in meditation, Raja Yoga, and the study of the sacred texts. If on the other hand the first house is in Capricorn or any house of a malefic, the fame may again come to the person, but for reasons rather immoral.
In the second house Jupiter will make the person rich and intelligent and capable to create his own destiny. It is said, that if the person just says something, the Universe has to obey. So maybe this person seems to be a diviner or foreteller but in fact he or she creates the future, and not predicting it.
In the fifth house the person may become interested in military activity and life, while in the sixth house, no enemy can stand against the person. It is also said, that if Jupiter is empowered even illness is too small of an enemy for the person.
The most difficult position of Jupiter should be the eighth house, where Jupiter will bring a great amount of misfortune, unpleasant events, and sometimes even a short life. But if the ruler of the 8th house is associated with beneficial, or the eighth house is one of the signs it owns or Cancer, then the life of the person will be rather long.
In the 12th house, Jupiter withdraws all its material blessings, but it still offers wisdom and a very capable mind.
The Gods associated with Jupiter are Lord Guru (Brihaspati), Lord Indra, Lord Vamana (the dwarf avatar of Great Lord Vishnu) and the Great Lord Brahma. The Graha is Lord Brihaspati.
We have seen Lord Brihaspati in the posts concerning Lord Chandra and Lord Budha, and even Lord Kuja.
The Rig Veda considers Lord Brihaspati to be son of the sage Angiras, and therefore brother of Lord Agni. He also may have two more brothers, according to other opinions on who is his father. He has three wives, and he is father to 17 (!!!) children, not counting Lord Budha and Lord Kuja among them. From these children 9 are sons and 8 are daughters.
Lord Brihaspati is the guru (teacher) of the Devas (deities), therefore his names Guru and Devaguru (or Devguru). He prayed to Great Lord Siva for this wisdom and Siva granded him his wish, and also made him Graha (planetary influence) and ruler of the Graha. That is why sometimes he is called as Grahaspati, although the name most of the times refers to Great Lord Siva.
The Veda considers Lord Brihaspati a friend of Lord Indra, and as Indra and Lord Agni he enjoys, maybe too much, Amrita. Also the thunder which is also under Agni’s power and the weapon of Lord Indra, is considered by the Veda to belong also to Lord Brihaspati. That I find very interesting as the Greek and Roman God of the same planet Zeus and Jupiter and the Nordic one, Thor, are all rulers of the thunder too.
Lord Brihaspati’s vehicle is the elephant but he also can be sitted in a chariot of – most probably – eight horses, or more peacefully, on an open lotus flower. His clothes are usually yellow and he has one head and two or four hands. The two hands possibly holding a weapon or a symbol of power, the third hand may also hold one of these or the Vedas and the forth hand offers blessings.

One should call upon Lord Guru:
* To avoid the malefic influences of Jupiter and magnify its beneficial ones.
* To be protected from thunders.
* To achieve wealth, fame and success.
* For help in studies and academic career.
* For good judgment and bettering of reasoning.
* To have children.
* Women to find a good husband (not sexual partner)
* To achieve any knowledge.
* Along with Lord Indra for pressing money matters, as the Veda call upon this duet as “Rainers of Treasure”.

A tip: Offer some Soma Juice (Amrita) to Lord Brihaspati (and Lord Indra) every Thursday, to always have his (or their) blessings.

The number of Jupiter is 5, so its magic square starts with 5. 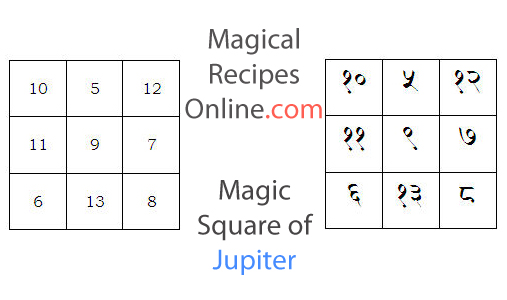 The simplest mantras of Jupiter are: