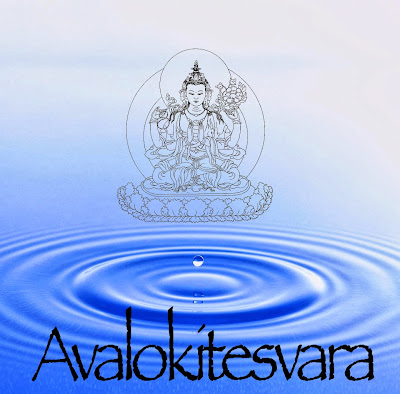 Studying the Sutra is said by the Buddha to be extremely beneficial. “For all the water in the great oceans, I can count the number of their drops one by one; but if anyone can accept and uphold four lines of a verse from this sutra, I cannot count the number of the blessings and virtues that he gains.” So here are four lines of the Sutra that are easy to think upon and a beneficial prayer as well:
I have met the ground of merits and virtues,
which is free from sins and filths,
just now I have sowed the seed in the field of supremacy,
and instantly gained the fruit of repayment.
This is a praise of a God towards the Bodhisattva Avalokitesvara as written in the Sutra, and I am going to come back to it.
The Buddha says that the heart of Avalokitesvara is the Six-Words-Great-Enlightening-Dharani. The word dharani means a talismanic prayer. And in the sutra asks Avalokitesvara to reveal this Six-Words-Great-Enlightening-Dharani, and so he does. And so, the heart of the Supreme Bodhisattva is:
Om Ma Ni Pad Me Hum
Is it possible to Exorcise Demons and and Vampires with a Buddhist Mantra? How can I Exorcise with a Buddhist Mantra?

If you have all this questions then you have to know that the Sutra says that when the Bodhisattva said the dharani, all demons, vampires, energy-eating ghosts, and evil beings were terrified and run away. But this is just one of the benefits of this great mantra that is usually written as:

Om Mani Padme Hum
The Om in the beginning and the Hum in the end are seed mantras, they have no exact meaning but are the seeds of numberless meanings. Mani Padme means Jewel of the Lotus flower, and although this jewel can be Great Lord Brahma, or the Buddha, as given in the Sutra, he is the Bodhisattva Avalokitesvara.

There are many teachings about the symbolism of each syllable of the mantra, or “word” as characterised by the Buddha, but none of them in the Sutra, so I would not refer to them. Let the power of the mantra guide you in understanding it.

So, apart from sending away all evil beings, what else does this mantra do? Obviously it can gradually lead in buddhahood. Some believe that is a wish-fulfilling mantra and some believe that it is a money-drawing mantra. Well the sutra gives many examples that the mantra and the power of Avalokitesvara grants wishes and bestows riches. The praise I have given you before is from such an occasion.
The Bodhisattva went to the house of a God who was suffering from constant poverty. When Avalokitesvara went to his home, although he was not in his true form, the God wanted to offer to him something, and even though he knew he had nothing to offer, went in his house to search for anything worth offering, and suddenly many riches of all kinds appeared in his house. It is the Gods generosity the seed he sowed in the field of supremacy, and was his greed that had caused the constant poverty that he was living in before.
The Buddha says about the mantra: “I can count the number of all atoms of the universe, but virtuous man, if anyone chants this Six-Words-Great-Enlightening-Dharani just once, I cannot count the number of the merits and virtues that he gains.”
The Buddha says that he cannot describe the blessings and the virtues of Avalokitesvara, so he would just briefly describe the blessings and the virtues of the pores of the Bodhisattva’s hairs. So in one example the Buddha talks about a pore in which a kind of women live in (the way the Buddha describes the pores of Avalokitesvara’s hairs is like describing universes) and, according to the Sutra “They have beautiful faces and good and wonderful figures, adorned with various ornaments. Their appearances look like heavenly Goddesses. They are immune from the afflictions of greed, anger and ignorance, and their bodies do not suffer from even the least afflictions or worrying of the human world. Those Gandharva women recite the name of Avalokitesvara Bodhisattva Mahasattva at the three times of the day, then they get all the necessities they desire.”
The three times of the day are sunrise, noon and sunset. Practically here Buddha shows as a way to call upon the blessings of the Bodhisattva and promises that all our needs and desires will be fulfilled.
So, here is a simple way to use the mantra. Just recite it 108 times early in the morning (or at sunrise, if possible), at noon and at sunset. But, as explained before, even if you don’t follow this system, and you just recite it any time, even just once, countless blessings will come to you.
The Buddha also said that if you have the written Six-Words-Great-Enlightening-Dharani on your person, you will be blessed with brilliance and you will help the people around you to bring out their best qualities and even to become Bodhisattvas. So here is the written mantra in Sanskrit. 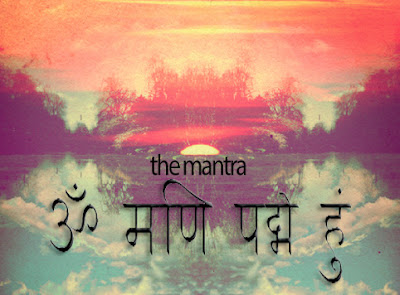 Now, in Tibetan the mantra not only looks quite different, but also it is pronounced differently. The Padme becomes Peme and the Hum becomes Hung, and so the mantra is: Om Mani Peme Hung. I, personally, prefer the Sanskrit, but if you want, try the Tibetan edition instead.
Although you may recite the mantra in order to obtain a certain boon from the Buddha, the Gods or the Bodhisattva Avalokitesvara, being it spiritual or material, you may also use this mantra without having anything particular in your mind, and then, Avalokitesvara (or whoever is the Jewel of the Lotus for you) will see that you will receive whatever you need.
I would like to add here that for those who would like to go even further, the Sutra describes how to make the proper Mandala for honouring the Bodhisattva in details, but also gives a simple way to honour him. Offer to him a white flower, and of course your love and trust.
May all the countless blessings of Bodhisattva Avalokitesvara be with you!
support the FREE ONLINE MAGAZINE ON WITCHCRAFT,
Magical Recipes Online
Discover, Play, Love!