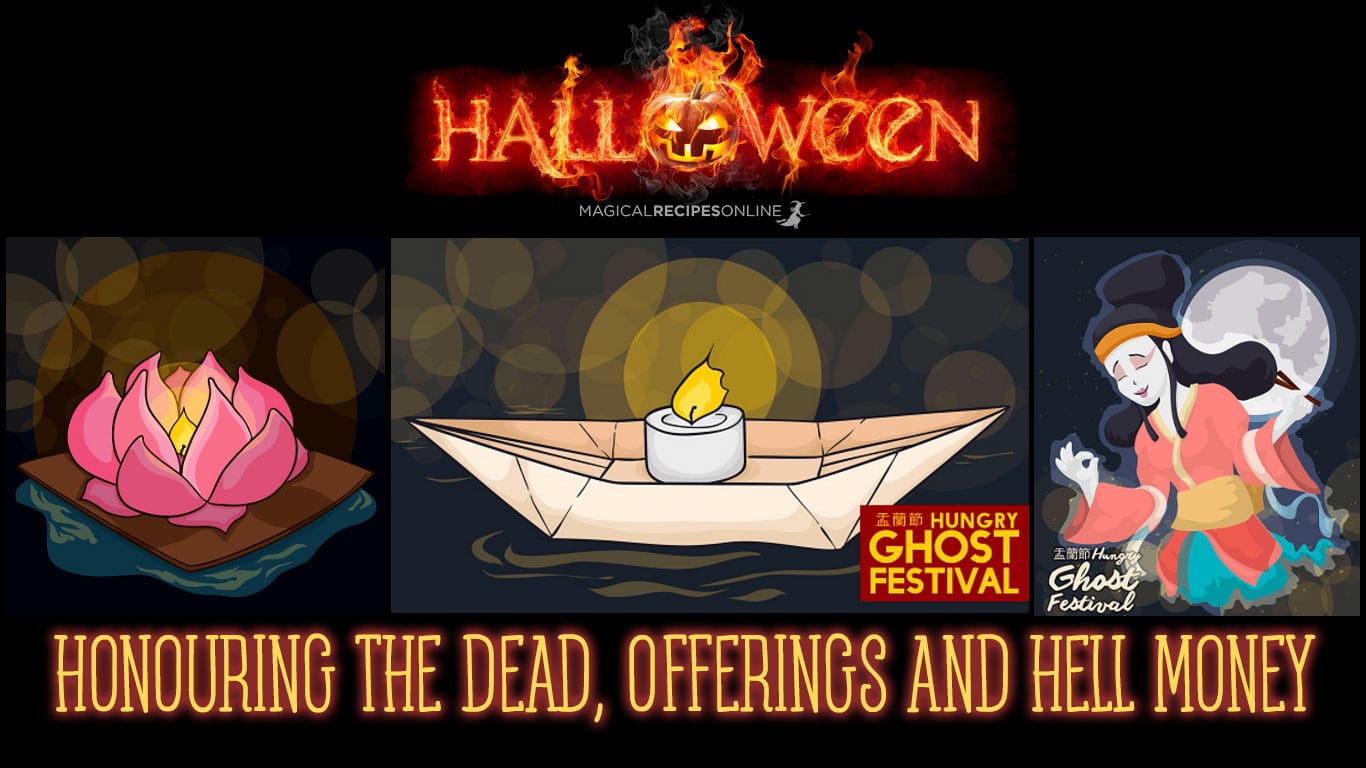 Offerings to the dead

Halloween is approaching and, amongst other things, this most powerful magical night is a good time to honour our dead relatives and friends, as the veil that separates the world of the living and the world of the dead falls.

Depending on the local traditions, food offerings, items, and other goods, or even incense and candles are offered to the dead. Even though Pope Zacharias forbade such offerings via the Synod of Rome in 734 A.D. as acts of idolatry and demonolatry for the Catholics, the folklore goes on, or has instilled the offerings as part of the Christian rituals.

Hell Money is such a tradition, coming from China. They are also known as Spirit Money and Ghost Money. But what are they, and what is the use of them? Well they are not real paper money bills. You can buy them from some Chinese shop, or from internet, or you can make them yourself, and they are burn for the sake of the dead, or in some cases they are put in their graves.

The exact reason why we burn Hell Money, depends on the tradition. So, this money, through fire, can go to the other world and pay for the sins of the dear deceased, so that he or she will not suffer. Or, the deceased receives it and, with it, is able to buy whatever they need in the other life. Others believe that the deceased will not receive the money. Instead, we burn Hell Money with other offerings so that the evil spirits won’t steal the real offerings. They will go to collect the money, thus, leaving the offerings for the intended person.

So, not only money can be burn for the dead. We can also burn paper photos, drawings or even written words of anything we want to offer to the dead. It is most usual to burn such money in Yu Lan (Hungry Ghost Festival). This festival takes place on the 15th (or 14th in some places) day of the 7th lunar month of the Chinese Calendar. But, it is a general custom for anytime we want to offer some money to our deceased. So, I don’t think there would be a problem burning such money, and other paper offerings, on the Night of the Dead (Halloween).

I should mention that the world “Hell” in Hell Money doesn’t really refer to the kingdom of demons, or to a place of internal suffering, as maybe a Christian will understand. It refers to the other world in general. So, if you prefer, use the name Spirit Money, or Ghost Money instead.

If you want to make your own Hell Money, use a light-weight paper. Make them like real money of your choice, but put symbols of the otherworld that you believe in. For example, a green dollar bill of, let’s say, 50,000,000,000.00 dollars, having the face of Lord Yama, or Archangel Michael, or Lord Anubis, or Lady Persephone, would be an easy to make spirit bill. Use your creativity and imagination to create the best Hell Money you can. Embody your beliefs in it.

Honour your dead, enjoy Halloween and please do remember: do not have sex with a ghost in the Night of the Dead!

That’s all. Have fun!

PREVIOUSCreatures of Light and Dark : The Banshee
NEXTPhallus. Sexuality against evil magic