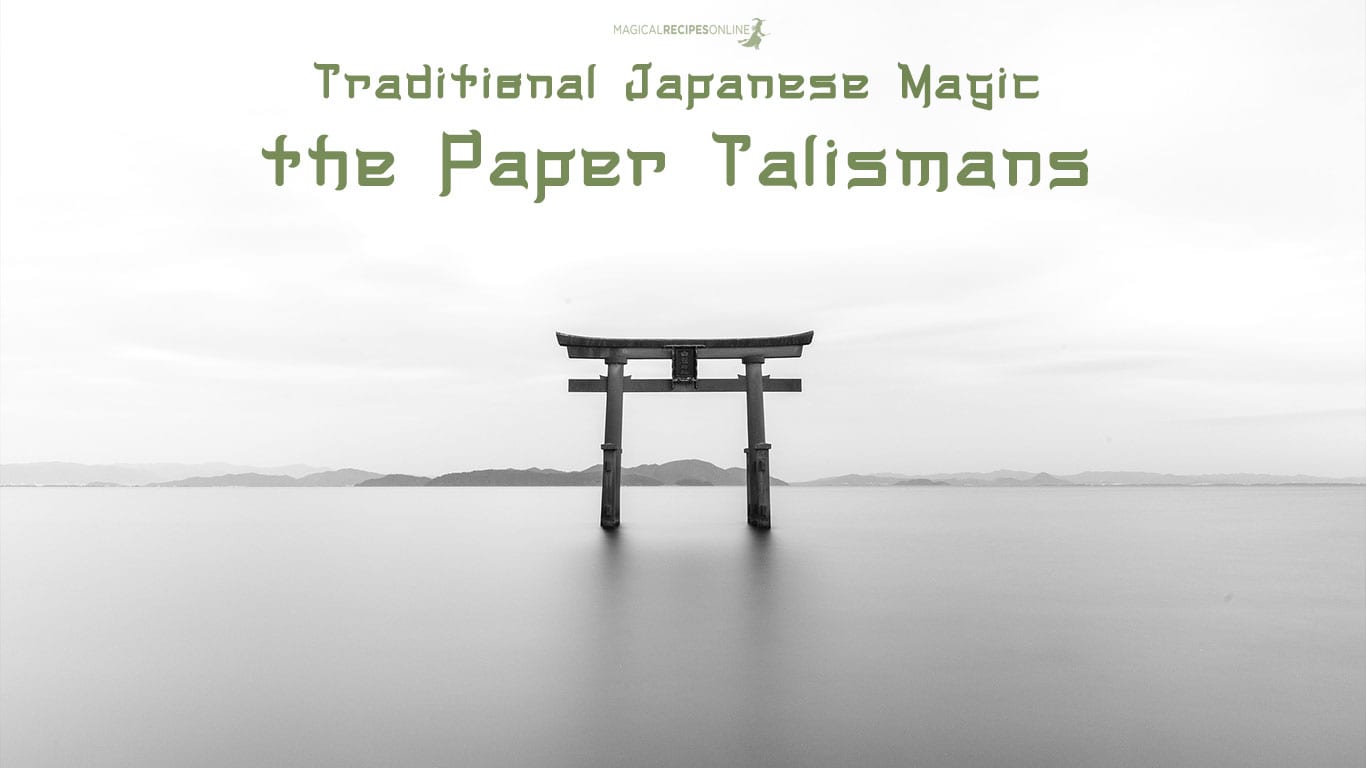 In several anime shows, like Sailor Moon and Inuyasa you may have seen these paper charms that are used in fighting evil beings, causing protection or performing other magical jobs.

I’ve seen them been called several names like sutra and ofuda. In fact these should most probably be called omamori. But what is ofuda, sutra and omamori? Do they really exist and if so, how can we make one of those?

Across the Earth, in almost every magic or religious tradition, there are some paper talismans. And although what it is written on them, the way they are energised and the way they are being kept and used may vary, there are some common rules. The shape you may be accustomed to through the shows is the parallelogram, and this is true about ofuda and omamori, but depending on the tradition the recommended shape of the paper talisman may also be a circle, a triangle or a square.

These pieces of paper have written on them usually something simple as a magical symbol or the name of o deity, but in some cases even a complete spell or a complete prayer like a sutra is used. If a text is written then the alphabet or the language that it is written in is usually one considered of magical power. That is why the Japanese ofuda usually have the name of the kami written in Chinese.

In particular, an ofuda usually has written the name of the kami (deity) and in most cases the name of the shrine or temple it is made. An ofuda is usually made on a piece of hemp paper/cloth, and it is intended to be placed in a home or shop, or something alike. For personal use a smaller talisman is made, usually with the same rules, and this is what an omamori is.

In most shows you may have seen these talismans being self-destructed in flames when their power is over. This also has its roots in reality. The paper talismans usually have a limited lifespan and energy and the proper way to release them is through fire in almost every tradition. An ofuda for example should be returned to its shrine to be burned annually, or, if it is made for a specific reason, when this reason has been met.

For the talisman to express its full potential, one should pay respects to the talisman regularly or even daily. But for it to have any power to express, a priest/monk/mage should have already energise it.

As it is a custom, these talismans used for general blessings and protection are obtained in the beginning of the year. I think that the magical new years day, the Winter Solstice, is a great day to make one or some.

So how do we make a paper talisman?

Well, according to the Shinto religion, you cannot make an ofuda by yourself. I have read that in special cases they may give you a special permission to make one, but nowadays that almost everything can be procured through internet anywhere, you may buy your desired ofuda or omamori from a Shinto shrine this way, and it is ready for use. But as this is not true for every tradition I am going to give some advice for those who want to make their own talismans. Of course, if you are making a talisman that you have specific rules on making it, follow those rules.

Decide what kind of paper you believe has the most magical power. The most common papers for these reasons are rice paper, recycled paper, parchment, and plain unused paper. Or if you prefer you may use a piece of cloth. Because this talisman is going to be released in fire eventually, I would suggest using some cloth made by natural fibbers rather than synthetic.

Cut your talisman in the size and shape you believe is the proper.

Then using carbon, or a magic ink like Dragon’s Blood ink, write on it the spell, magical symbol, or name of deity that you want.

Now, light a candle and some incense according to what your talisman is for, or according to the preferences of the deity. Pass the talisman three times through the flame of the candle and the smoke of the incense, to purify it and open it in receiving the energy you are going to give to it.

If you have written the name of a deity, meditate on him or her. Especially on the aspects of the deity you are invoking for the talisman. Then ask the deity to pass his/her essence in the talisman. When this is finished, leave the talisman next to the candle and the incense until both are burn out.

After that, the talisman is ready for use. Put it in any place you want it or keep it on your person. Either way, make it a daily routine to give thanks to the talisman for the help it provides to you.

When the reason for which the talisman has been made has been fulfilled release the talisman in fire. Or if it is for a general reason, release it in fire after about a year, or whenever before that you feel that it has used all its energy.

Please do take all safety measures when using candles and fire.

And do remember to respect the lives and the will of all people, when using magic, as black magic always harms the one casting it.

Blessed be, and have a very Happy New Magic Year!