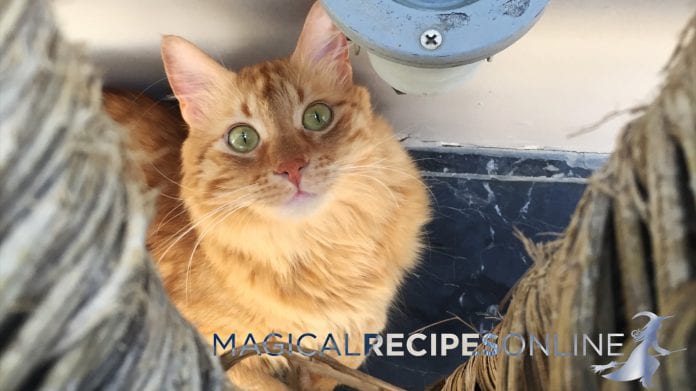 Throughout history, cats magic was honoured and praised by many traditions, while other times hunted as devil’s minions or even considered a source of endless bad luck and biblical havoc! Yet these fluffy, small, domestic animals have been chosen to be humans’ companion since the beginning of our Civilisation or maybe it was the other way around. Humans chose them because of their playful and cheerful attitude towards them and by their habit to hunt and chase away vermin who threatened human society by spreading diseases or destroying crops like mice and snakes.

This ability was considered sacred to the ancient Egyptians, who identified the Goddess Bastet (a.k.a. Bast) with the lovely and familiar face of a domestic cat. The story involves the Great Battle between the Great God of all, the Sun God Ra against the horrific Apophis, the celestial venomous snake who wants to devour and destroy Ra. 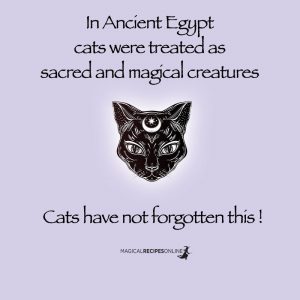 At first, Ra creates and summons Sekhmet, the Divine Lioness and sends her to defend him and destroy all the Rebellious ones. Ra noticed that “she who dances on blood” was too fierce and he called her back. Instead of Sekhmet, she now sends the less violent and more protective to humans, Bast. Fighting for centuries against Apophis, Ra decided to cast a powerful spell and “teleport” them both in the darkest abyss where she will continue to defend Ra and the whole creation keeping the demonic serpent forever weakened and unable to come back.

Isis, the Great Goddess of Wisdom and Magic also loved and protected cats. Therefore cats where not supposed to be hurt by anyone as it was considered a crime in the divine eyes of Bastet. The love of the Egyptians for their cats was so monumental that they even created sarcophagus for their favorite animal. Egyptians corresponded cats to Sun until the Greeks expanded and Bast was later associated with Goddess Artemis (Diana) who was a Moon Goddess.

Cats Magic is also important in Ancient Greece too! Artemis was believed to turned into a cat and hid behind the moon, so that the fierce demon Typhoon would not find her. Since then, she was also associated with cats. To Artemis though, all the animals are sacred. Hecate, another Lunar deity, who was accompanied by dogs, was also believed to “utilise” cats in order to contact the spirits of the dead. In one story she takes Galanthis by her side, a woman who Hera, the all might Queen of Gods, turned into a cat as punishment for interrupting her plan to stop Hercules from being born. Hecate felt sorry for the poor creature and she took her as her beloved companion.

In Norse theology, Freya the Goddess of Beauty and Magic, has all the cats under her sacred protection. Even her chariot is drawn by cats (lovely huh?). While Cerridwen”s white cats attend the magnificent Goddess as her angels, sending messages to Earth or doing the Goddess”s errands.

According to the Jewish Lore, Lilith the first and infamous “Eve” refused to bow to Adam and she was cast away from Paradise. She later transforms into “El Broosha”, a black cat who hunts looking for babies (sons and daughters of Adam) to suck their blood and drain their energy. In Dark Medieval Ages cats where identified with the face of all demons, not just Lilith. In 1484, Pope Innocent VIII issued a papal bull, which condemned to death all cats as unholy spirits including their human companions. Numerous cats and humans where burned alive.

What is the Mask of Evil?

Such was the fury against witches & cats during these years, that people wore masks to cover the back of their hands hoping to fool the Devil himself when transformed into a cat. It was believed that cats would also attack from behind and this mask could frighten them enough.

Christianity and Cats. A dark history

However in Christianity, despite the mysterious bloodlust of the Dark Ages, where thousands of cats were indeed burned and slaughtered as considered companions of witches or witches themselves, Saint Gertrude of Nivelles is believed to be the Matron saint of cats. She is invoked to cast away mice and rats.

The last Pope, Benedict XVI, was famous about his love and affection for the strays of Rome and all the world”s. It is also noted that his house in Germany is “guarded” by a Cat statue (interesting, isn”t it?). Much earlier when Pope Leo XII held the Vatican throne 1823-29 there was a cat named Micetto. As a lovely kitten, Micetto hid in Pope”s papal sleeve peering out with his cute face at those being given audiences.

In Islam things start to become complicated as by some scholars cats are revered and by some others black cats (along with black dogs, toads and snakes) are amongst the favorite animals a Djin (demonic spiritual being who we should always avoid any contact) can transform into.

In China & in Japan cats are considered to be often mischievous and thieves, yet they also possess magical powers. They often believe that if their tail is sharp they tend to become “demons” if not raised properly. Of course there is also the Maneki Neko (Japanese: 招き猫), which literally means the “beckoning cat”, a common Japanese lucky charm, talisman believed to bring good luck to the owner and the house. You can soon find and buy your Maneki Neko here and welcome good luck in your life. Stay tuned!

Cats Magic: magical facts and spells to practice with your cat! Employ your beloved familiar to the Craft

Cats were always considered to possess magical powers and aid Witches and Mages to achieve better attunement to the higher realms. In Witchcraft it is strongly believed that cats can see the other planes and notice spirits, spiritforms and other entities. There are numerous stories – old and new – where a human notices his/her cat act strangely only to understand lately that this was all because of the presence of a certain spiritual entity. This is probably why cats where traditionally chosen by witches to accompany them.

Literature, theatre plays, TV series and blockbuster movies created a complex image of our domestic cat, embodying magical powers – both good and evil – which can or cannot be easily noticed. From “Alice in Wonderland” we see the Cheshire Cat (read more about the Cheshire Cat here and understand more about the Lore of the Cats) who can appear and disappear at will and in the famous TV series “Charmed” their beloved cat is actually a human transformed in this cute animal, while in “Witches of the East End” a powerful witch can transform into a cat at will.

Cats Magic and why cats love sitting in Circles

Witches have always had the knowledge that cats like to sit in circles. As mentioned they were chosen to be their familiar spirits for many reasons. Cats were considered sacred. They were protecting the sacred space the Witch had created. Moreover, they were strengthening the link between the Goddess and the Witch. Also they were augmenting the witch”s psychic abilities to see the unseen and they were protecting the Witch from danger during times that practising Witchcraft was an offence. As familiars, cats are great teachers. Cats teach us independence and faith, the belief that the Universe will provide and live our lives without unreasonable fear. In addition, cat”s hair has been an ingredient in many different spells and most grimoires suggest that the hair must come from the cat willingly. We can see that this symbiosis (co-existence) was much appreciated by both sides, the Witch and the cat.

In recent times, we have seen a plethora of blogs, posts and videos that are examining why and if cats like to sit in circles. You can simply search youtube or alternatively read the following article.  As said this is ancient knowledge and not something that has been recently discovered. However you can see how people who were not interested in the Craft remained ignorant for so long.

Cats are connected with fortune – good and bad – since the ancient years. Black cats are believed to cause bad luck in America whilst in Great Britain it”s an omen of Good Luck! Listen to your instinct and hear what your spirit – or guardian angel tell you.

Where does the belief that Cats have Nine Lives (or for some Seven Souls) come from ? Back in medieval times a Witch was believed to have the power to transform into a cat and back only for 9 (or 7) times!

Very popular are considered the cat-shaped candles which are often found in various colors. Witches all over the world employ that beautiful pieces of Witchy-candles to conjure forces from the beyond. Below there is a list of the mostly used cat-shaped candles with examples of possible uses. Remember that colors” correspondences are subject to each practitioner”s believes about each color thus it may differ. Follow your instincts.

Soon you”ll find a link here on how to buy candles with cat figures! Stay tuned!  ***Good luck! Curio only!*** 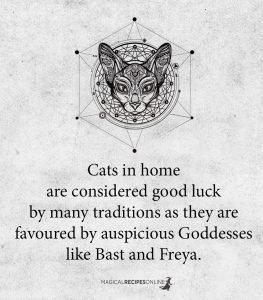 In Thailand, the royal coronation ceremony always included a cat, which believed to temporarily bear the late king”s Spirit who witnesses the ceremony through the eyes of that cat. In Thai tradition there is also a spell to bring rain which includes a cat. You see a cat”s cry was believed to bring rainfall thus a beautiful cat was put in a beautiful bamboo box and parade the animal around town chanting the spell which goes like this:

The species of Cats is also known for its ability to become noticed only when they really want to be noticed. They walk silently and act like they do not exist (again… only when they want to). This is why cats are used in Invisibility spells. I really don”t know if you will actually become invisible. Although the point of this kind of magic is to become unnoticed! (Who wants to become unnoticed huh?… tricky question…).

Take a black Cat-shaped candle and anoint it with “Crown of Success” oil thinking of your wish. Why and when do you want to become unnoticed? Call upon the powers of Bast(Bastet), Freya, Artemis or Saint Gertrude and ask for their help. Light up the candle. Let the candle burn entirely. Visualise yourself becoming invisible, that other people stop noticing you and you can walk unseen. Take the remains of the black candle and put it in a black mojo bag along with few Black cats hair. Add some Dandelion and empower it with your wish! ***Good luck! Curio only!*** ***ALWAYS USE FIRE SAFETY MEASURES***

Since we mentioned all about the powers of Cats in Gambling and Good Luck spells lets see a how to create a traditional Mojo bag which is often utilised to reverse bad luck and employ good luck for our intentions.

Black Cat”s hair were used as curio ingredient in Gambling spells and mojo bags. If you like the idea, go out, find a black cat! Once you do that, caress it and keep the hair that is left on your hand. Do not force the cat or apply any kind of violence. Remember the wrath of Bast!

Furthermore, cat’s eye gemstones are also believed to bring good luck and reverse bad luck. So, you can put in a green mojo bag a cat”s eye gemstone. Also add some hair of a Black cat, some dried patchouli and catnip. Keep it for good luck! ***Good luck! Curio only!***