Is time Travel Real?
Every now and then there is a conspiracy theory that ignites debates between followers and – of course – opposers of an – usually absurd – theory. Now it’s time for Time Travel. I

Is time travel Real? Do time travellers influence famous painters of history which then subtly pass a hidden message through their paintings?

Tim Cook has just made a -not that famous – painting from 1670 go amazingly viral after noticing what looks like an iPhone in detail – when it is supposed to be a letter. The CEO of Apple stated in Amsterdam: “I always thought I knew when the iPhone was invented, but now I’m not so sure!“
The painting ‘Man Handing a Letter to a Woman in the Entrance Hall of a House’ by Pieter de Hooch, actually shows a man holding or giving a letter.
The door and window of this entrance hall in an Amsterdam canal house are wide open and the daylight falls on a young woman receiving a “letter”. Pieter de Hooch cleverly linked the interior with the exterior (www.rijksmuseum.nl) but the followers of this theory actually believe that a time-traveller influence Pieter de Hooch to paint a painting with a “touch” of future. 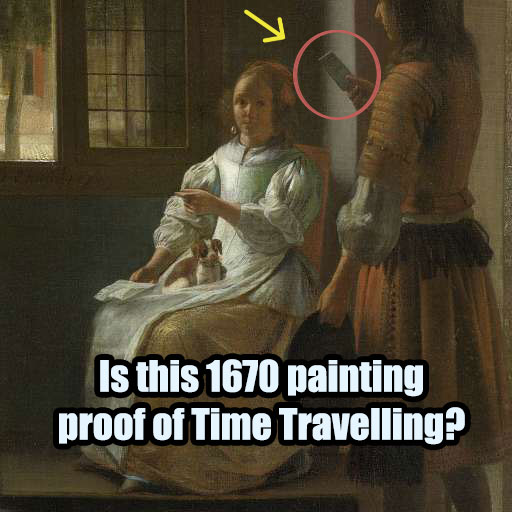 I strongly believe that this is actually a letter… but there again… I do believe in time travel. There are many who time travel – a lot – during their astral travels and there are others – over the history of Human Race – who claimed that they travelled in time in order to change the course of history.
What do you believe? Comment in our Facebook Page
https://www.facebook.com/MagicalRecipesOnline/
Blessed be!

General Predictions for the New Week: The new week begins a very
Witchcraft of the Stars has always been considered powerful and it dates
Astrological Daily Predictions. Saturday, October 20 2018. What happens to each and
This Express Grounding Technique is designed for all of us who are
Tonight something really great is going to happen. When it gets dark,
Go to Top