Home Witchcraft Pearls and a pearl spell for Wealth 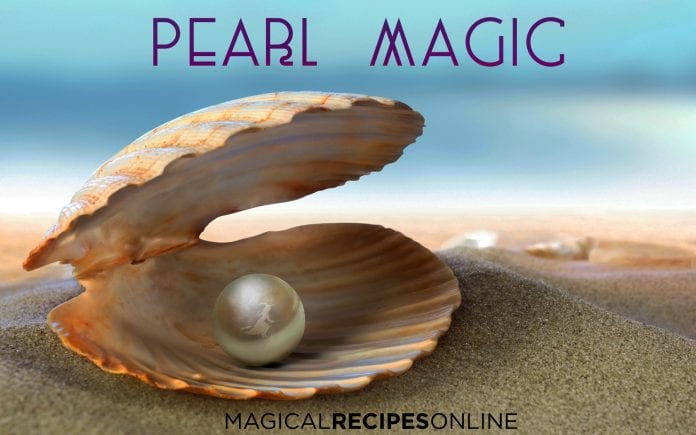 A pearl is a symbol of Elegant and timeless beauty and at the same time it is considered very rare and aν omen of good luck – or even divine intervention when found, as the most valuable pearls occur spontaneously in the wild, thus are extremely rare. A pearl is a hard gem-like sphere created within the soft tissue (specifically the mantle) of a living shelled mollusk.

Pearls were once considered the Tears of Joy from the Gods & Goddesses especially from Goddess Aphrodite, the Goddess of Love & Beauty in Ancient Greece (this was how it was “believed” that they were created) whilst in Ancient Egypt Pearls were associated with Goddess Isis, Goddess of Love & healing. Both Gods had strong relation with the Element of Water.

A Pearl can be seen as a perfect Miniature of the Full Moon and this is why Pearls are almost always associated with the Moon. In antiquity, pearls had the reputation to occasionally shine under the Moon light. This is why pearls are sacred and EXTREMELY magical potent when interacting with creatures or deities of the Moon and the Sea.

In India, Pearls (amongst other precious things like gold) were considered to be the sacred treasure of the Naga kings. This treasure were believed to be guarded by Sharks, probably symbolising the sacrifices which have to be made in order to acquire something divine.

Never wear or carry pearls when you feel sad or angry. Pearls amplify your powers!

Amongst magical properties of Pearls one can find:

A Money Spell With a Pearl

Lore: This is a spell which is dated back to the most ancient days. It’s origin is lost somewhere between ancient India and Egypt. It probably comes from even older days and due to the nature of the spell I truly believe it comes from Atlantis.

Essence of the Spell:

As pearls were considered the precious treasure of Nagas and other Sea Creatures and deities, returning one to the Water (its original source) was believed to be an act of Gratitude which was always rewarded with earthly riches. (Read more about Gratitude, the source of great and powerful magic here in the School of Witchcraft!)

The spell, commanded to go alone, to a river or a stream, one day before the Full Moon (while its still waxing – click here to read more about the powers of the Waxing Moon and Full Moon).

Throw a pearl (it doesn’t have to be an expensive one but give one which makes you wanna smile and not sad that you lost it!) into the river/stream, knowing that the water will ultimately guide it to the Sea, its original source. You give away something precious knowing that the Divine powers will know you have faith in them. Chant 9 times:

“Powers of the Waters, Listen to my Plea,  as I now give you back this pearl,  I become rich with this spell!”