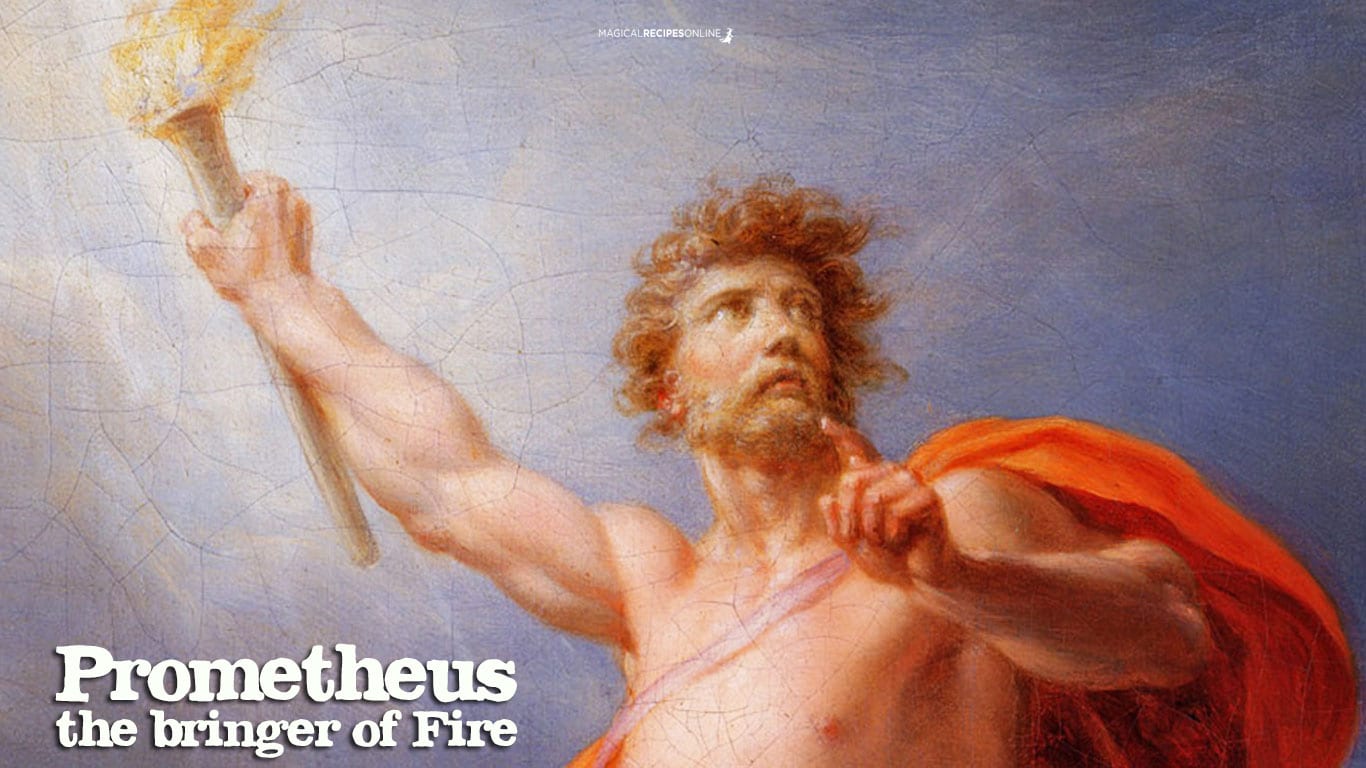 Prometheus (Προμυθεύς Pro-metheus the Fore-thinker as his name means in Greek) is a Titan. Titans are a race of Gods older than the Olympians, sons and daughters of Gaia and Uranus. Prometheus was the son of the Titan Iapetus and Clymene (or Asia, or Themis) daughter of Oceanus, the Ocean. His brothers was Epimitheus, Atlas and Menoetius. He took part in the ancient war of Olympians against the Titans, the Titanomachy (War / Clash of the Titans) but he stood with Zeus and helped him. This is why he was part of the Olympians Gods.

Prometheus created the human kind with mud (earth and water) and fire so that they look like the Gods, while Athena (Minerva), the Goddess of Wisdom helped him by giving mankind the gift of Logic and Intelligence (air). This legend describes the four elements of the World which were used in balance to create Mankind.

Also according to Orphics, the worshipers of Orpheus, the mud Prometheus used was soaked with the blood of the killed Titans. This implies that Humans have Divine energy flowing in them and the are descendants of the Gods.

According to the Hesiod’s Theogony (the sacred text which describes the Creation of the World, the birth of Gods and the beginning of Time and Mankind), Prometheus loved so much the Mankind that he tried to trick the Omnipotence of the King of the Gods, Zeus. In a sacrificial meal he presented Him two parts of beef to choose what he really wanted, one was the stomach of an ox filled with beef and another part with fancy glittering fat but filled with just bones. Prometheus was just trying to give his beloved mankind the best nourishment. Zeus was tricked into taking the useless part and was really furious with both Prometheus and the Humans so he extinguished all fire from the Humans making it a divine privilege.

Prometheus seeing Mankind suffer without Fire, he challenged once more Zeus’s wrath for the sake of Humans. Sneaking in God’s Hephaestus laboratory, the master of Manufacturing and Blacksmith of the Gods, he stole sparks from His wheel and made fire which he hid inside a fennel-stalk and brought it back to the Mankind.

Zeus was even more furious that revenged Mankind with Pandora. But mostly his rage was against Prometheus and he swore to the Waters of Styx to imprison him eternally. Therefore, he chained him on the peak of mount Caucasus while He also sent a huge eagle, son of Typhon and Echidna, the Father and Mother of all Monsters, to eat his liver every day because by being a God, Prometheus liver was regenerated at night-time.

Finally he was released and rescued by Hercules, the son of Zeus. Zeus was so proud of His son that he forgave Prometheus. But because He swore to the Waters of Styx he couldn’t break this Oath. This is why he commanded him to make a ring from his chains and the a small piece of rock of the mount Caucasus. This was the first ring and Humans begun to make and wear rings to honour their Greatest Benefactor and forefather.

Greeks still celebrate Prometheia a feast in honor of Prometheus during the Summer Solstice on the Mount Olympus! (We will soon give you much more information of this Great Feast and Rituals).

Invoking Prometheus was very common in Greece (and still is for the believers) as he answered to most of prayers, continuing his tradition to help mankind till the end – even when challenging other Gods and Goddesses. Prometheus possibly played a very important role in Samothracian Mysteries (Cabeiri) a cthonic (earhly) cult of the Great Gods.   This is why he prabably manifests in invocations wearing the Iron Ring of the Great Mysteries.

Evoke Prometheus by lighting a fire:

We will soon Give you a master spell to create a Ring of Power forged by the power of the Elements and the Blessing of Prometheus.

Change Yourself, Change the World!