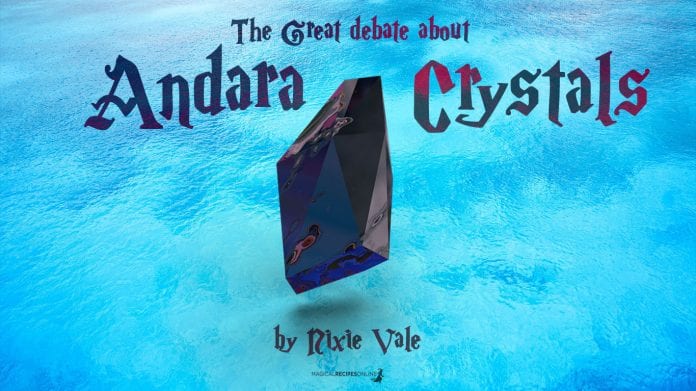 One of the more recent debates in the crystal world is about Andara Crystals. There are two sides to this debate, one side believe the Andara crystals have phenomenal metaphysical properties, and the other side believes that it is just slag glass, the leftovers of a manufacturing process. I am going to look at both of the sides to this, and let you make your mind up for yourself.  Andara crystals are a relatively new discovery.

They were first found in Northern California in the 1960’s after an earthquake, and due to the elements it has become harder to find them as only a small amount of Andara crystal deposits are able to be collected.

Let's begin then… The Fantastic Super Stone…  Andara crystals, also known as Monotomic Andars, are Heliocentric, and this means they both reflect and absorb light, which is actually quite awesome, and it wasn't until I began my research on Andara crystals that I came across this as a term. The Andara have a glass-like structure that looks very reminiscent of Obsidian, and comes in a very wide range of colours. The lighter coloured Andara crystals are able to create an amazing rainbow effect. The most mysterious property with Andara crystals is their ability to change colours; this happens most often with Clear stones, and tend to change to green, blue or a shade of yellow. The colour the stone changes to is said to occur depending on what the crystals are being used for, and what goals you wish to accomplish with their aid. Some Native American healers have said that these are spectacular healing stones, especially when you hold them up to natural light. It's said that if you gaze into the crystal while held up to the sun you will be able to connect to the Andarean Consciousness. They are great stones to work with if you are a lightworker or healer because they can connect with them on a very deep levels.     Andara crystals can be used for many different uses, and the colour with have a specific resonance frequency with the person using it; with this it is best to choose your andara crystals in person so you can ensure a connection with the crystal, otherwise it will simply want to move on, and won't be able to work to their full potential with you.   Andara crystals can be used for…    ???? Expanding your state of awareness   ???? Connects to the Chakras and can clear and balance them  ???? Increases the access you can have with the Akashic Records and Universal Consciousness   ???? Develops the spiritual process at an accelerated rate.   ???? Helps you to manifest your dreams   ???? Use as gem elixirs to clear spaces of unwanted or negative energies. Cleanse and re-align your energy through bathing with the crystals.

Each colour of Andara has it's own unique properties, but the overall properties that are common in Andara is to help the growth process whether it's spiritual growth or reaching personal goals. When you work with Andara crystals you are working through your heart chakra, and they help to facilitate trust between crystal and person, and between you and other people.     Horrific Fraud in the name of Enlightenment.   Looking at the flipside of this debate is that Andara crystals are just slag glass, a by product from the manufacturing process and are sold knowing they have no properties at all. Hibiscus Moon says "Andara is said to be trademarked. That raises a little red flag for me" [hibiscus moon]. There are a lot of people out there who argue that Andara crystals have no metaphysical properties and if you see if you should avoid them like the plague. The Andara originates from what can be classed as a 'dump' which was abandoned for many years. I can't remember the name of the site, but one said that a group of sellers band together and buy slag glass and then sell it between their group, creating authenticity certificates complete with signatures; again amongst themselves. Websites like scamadvisor.com, scambusters.org are trying to make people aware that the "Andara Craze" that is sweeping the crystal world is in fact a scam, and it is innocent people who are most at risk of this fraud.

Crystals and Glass are two very different substances. Crystals will form according to Nature's regular geometric shapes. All crystals use this structure when growing, even if they are not visible to the naked eye; their growth pattern is slow and methodical. Glass is formed quickly rather than slowly. When the substance is in it Molten state, then cools and hardens quickly, this forms glass because the crystalline structure cannot form. Glass does have metaphysical uses, and represents transformation and the merging of the elements. It combines the four natural elements before it arrives in it's final state. It combines Fire and Air as the Silica is made molten which it is made into a Liquid form and finally, once it is in it's end shape it cools and becomes a solid Earth state once more. There has been glass found made as early as 4,500BCE. The Ancient Egyptians used blue coloured glass in the headdress of Tutankhamun's death mask. The blue on the face is made of Lapis Lazuli.     In Conclusion…   One of the most important things to remember is to form your own opinions. I have never personally worked with Andara crystals, but I have heard wonderful things about them in community groups on Facebook and from friends who have. I like the vast array of colours that are available because I work with colour a lot on my healing work. Personally I have a series of coloured glass spheres, and I use them as massage tools as well as a focus for calling on the healing attributes of a certain colour. Do I think they are real or fake? I am not sure. I think that everyone experiences minerals differently. I am more attuned to Calcites rather than Quartz, so it stands to reason that some will be attuned to the frequency that these stones' have. There are people who dislike man made crystals such as Opalite or Blue Obsidian, where others connect to them, and they facilitate the ease of the flow of energy.     We are all vibrating on different frequencies, and if you have had intense experiences with these stones, then that is fabulous, but if you don't have a connection to them, or feel they are fakes; it is important to have respect for both sides of this debate. Neither side is "wrong", rather you simply see the world through different eyes. Just because someone says it's fake or incredible doesn't mean you have to believe them on blind faith; take a look for yourself, experience them for yourself.

Nixie Vale is the creator of the Ramblings of a Rainbow Witch page and group on Facebook. Nixie has always had a gift with words, and she has combined that with the deep love and passion for her craft, and her fascination with history. Nixie has a profound connection to colour and it's use in magic and it's psychological effects, she has always had an interest in the natural world, from animals to crystals, and Nixie has taken all of these and fused them with her love of literature.  As a teenager Nixie began learning Tarot and she has also learned about other forms of Divination and incorporated these into her repertoire of skills. Nixie is also a very creative person, having crafted jewellery, sewing and a plethora of other interests. Nixie has been writing about witchcraft for the last 6 years, and after being urged to share these 'ramblings' she created her page. Nixie is a trusted member of the facebook Pagan community and has worked with many in different ventures