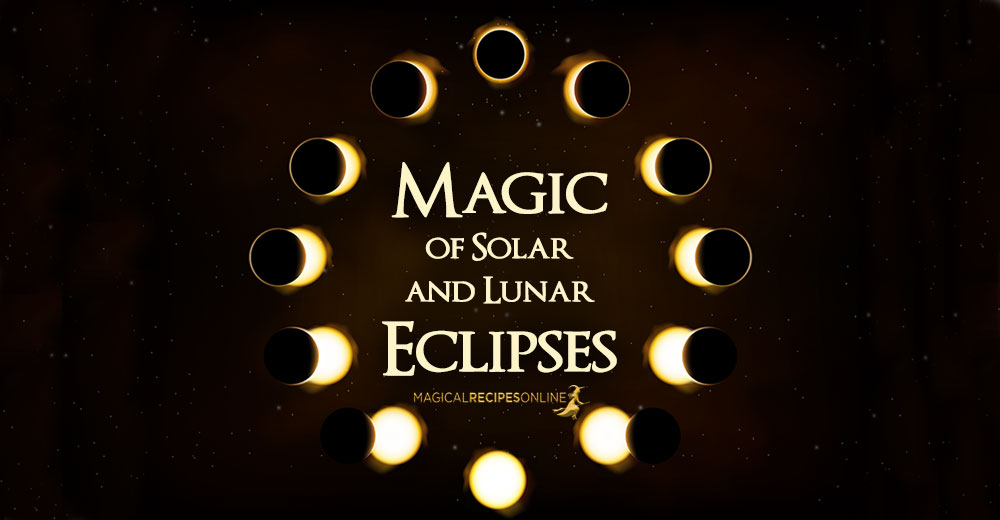 Through our Times as a magical magazine we’ve put much effort on shedding light on Eclipse Magic. This is one of the most Magical Times of the year. Eclipse Magic is not for the faint hearted. Let’s see now, with the help of Nixie Vale, what magic lies in Eclipses.

From the Earth we experience three distinct kinds of Lunar eclipses; penumbral, partial and Total.

For many Pagans all over the world the Moon is compelling and a vital part of their craft, and this has been so for thousands of years. Over the centuries the Lunar Eclipse has become known as a harbinger of drastic changes or major events in a culture. Unlike the Solar Eclipse a Lunar Eclipse can be seen from most places in the world and can take on a reddish hue, which can appear to be a blood-like colour. Spells that are worked during a Lunar Eclipse have an amplified effect, and can end up having a whopping amount of power behind it. I have seen in groups and on pages that it is “dangerous” for a newbie to work spells during any kind of Eclipse, but I wouldn’t say it’s true, however if you feel you aren’t ready or unsure about it, give it a miss. When you feel you’re not ready, or unsure you will find your focus slipping and the spell can go awry.

Spells for increasing psychic abilities, intuition and spiritual awareness are great for working during a Lunar Eclipse.

Rituals that connect you to the Lunar Deities such as Diana, Selene and Thoth

A Lunar Eclipse is a fantastic time to give offerings to the many Lunar Gods and Goddess, or to just a few.

From the Earth we experience three distinct kinds of solar eclipses, total, partial and annular.

A total eclipse occurs when the Moon completely covers the surface of the sun that is viewable from the Earth. A Total Eclipse can only be viewed from a limited area, and those outside of that area will probably only see a partial eclipse. The area that can see the Total Eclipse forms a belt which is usually around 100 miles wide by 10,000 miles long. The sky can darken during a total eclipse.

There is a rare kind of eclipse called a Hybrid Eclipse  and this is when during the Moon’s progress across the sun it changes from an annular eclipse to a total eclipse, or vice versa. I’ve not found too much information on the Hybrid Eclipse, or when the last one was.

The Solar Eclipse always happens at a New Moon, and this is often a time of rest and reflection, planning and looking inward. During a Solar Eclipse the Moon blocks out the light of the Sun, which is a powerful symbol of vitality and virility; a Solar Eclipse is a powerful and highly charged moment that can be felt radiating across the Earth, and this energy can bring big changes. These changes can be difficult, upsetting and very emotionally charges. They will start of slow and niggle at you before coming to a head at the Solar Eclipse; at this point you cannot ignore it these changes may be hard but at the core of your being it will make sense, even if it takes time.

During a Solar Eclipse we experience what is called a “micro-year” and this is when the Sun is whole, and is then partially or completely hidden and is once again visible once the eclipse is over. Within the short time it take for the Moon to travel across the sun it we can experience a complete turn of the Wheel, passing through the Solstices and Equinoxes.

Spells for planning and setting intentions

Spells for Abundance in all areas

Whether it be the Lunar or Solar Eclipse you don’t have to physically see it with your own eyes to work with the Energy that the Eclipse will bring. Eclipse energy is NOT for the faint of heart because it is powerful and will knock you on your backside. If you don’t feel ready for that level of energy, give it a pass.