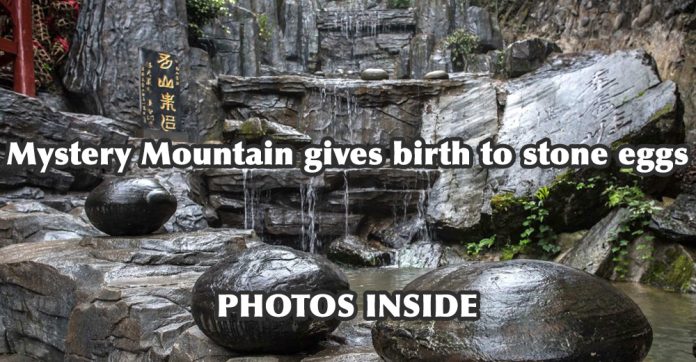 As it turns out, we haven’t seen all the wonders mother Nature hides inside her divine belly. Scientists are totally baffled by a mysterious mountain in china that gives birth to stone eggs for ‘hundreds of years’.  Located in a pretty remote part of Qiannan Buyei and Miao Autonomous Regions in Guizhou province.

The Mystery Mountain and the Stone Eggs

As reported by Chinese media, local citizens have observed this phenomenon for decades. These amazingly smooth stone eggs incubate in Mystery Mountain’s hollows and eventually fall to the ground. According to their tradition, locals take gather the rocks and bring the back home for good luck. After all, it’s pure Yin energy and with clear association with the element of Earth which brings good health, stability and abundance according to the Chinese tradition.

Every now and then, the cliff appears to “lay” a 6-18 inches (diameter) egg which falls to the ground. Of course there are more smaller “stone eggs” scattered nearby.

Scientists have tried to decipher the origin of the amazing phenomenon. According to a research group, the mount is made of a common type of calcareous rock that was formed 500 million years ago in the Cambrian period. Due to the different time it takes for each  rock to erode has led to the appearance of the eggs which are made of heavier sediment deposits.

Of course this does not explain the round and smooth shape of the stone eggs. Some believe that it has to do with prolonged rainfall. Hence the continuous running water or sudden landslides modify and sculpt the edges of the stone eggs.

Many local tourism services encourage visitors to travel there as they are definitely going to be amazed by the wonders of the mountain. Of course some of the “stone eggs” have already been taken/stolen but many remain there untouched.

Talking about grounding… what a perfect place to tap into Mother Nature’s Magic and the power of the Element of the Earth! Right?