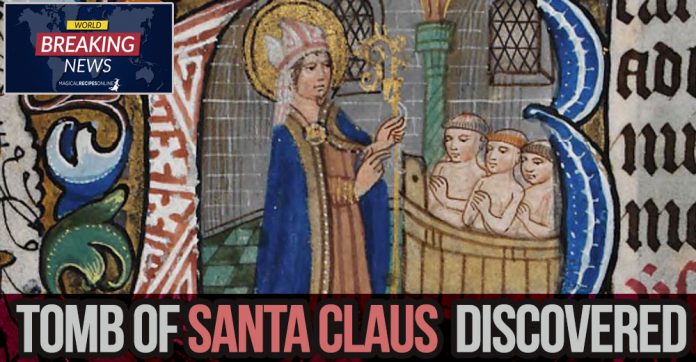 Is Santa Claus’s tomb unearthed in Turkey? Archeologists believe, that they may be up to something huge here! They are pretty sure that they have just discovered an almost intact 1600-year old temple and the burial grounds of Saint Nicholas.

The discovery was taken place in Antalya, Turkey. Saint Nicholas of Myra, the beloved Santa Claus of our childhood was believed to be born there. According to the Turkish newspaper Hurriyet:

‘We have obtained very good results but the real work starts now… we will reach the ground and maybe we will find the untouched body of Saint Nicholas.‘ said Cemil Karabayram, the director of surveying.

Within the ancient St. Nicholas temple is a smashed grave can be located. This was once believed to bear the sacred relics of St. Nicholas. However, in 1071, during the conquest of Seljuq Turks, Christians moved the relics to a Christian territory. Furthermore, in 1087, Venetian (?) sailors mounted an expedition to retrieve/stole(?) the bones and transported them back to Bari, Italy.

Because of this expedition – and of course until today – we believed that the remains of Saint Nicolas were kept at the Basilica di San Nicola.

Saint Nicolas was born in a rich family. Unfortunately his parents died when he was young thus he inherited all their property and money. Saint Nicolas later became a bishop and was known for his generosity. He donated his money to the poor and especially underprivileged children. Hence, St Nicholas became the Saint of all Children, providing the foundation for the legend of Santa Claus.

He was believed to rescue children from poverty, hunger, even kidnapping (!!!) and freed the from slavery. Well wether you are christian or pagan, he truly deserves our devotion. Right?

You have to be patient if you want to visit the temple though. The temple is currently inaccessible but work is in progress. We really hope that this will bring hope back in every child’s heart, christian, pagan or anyone.