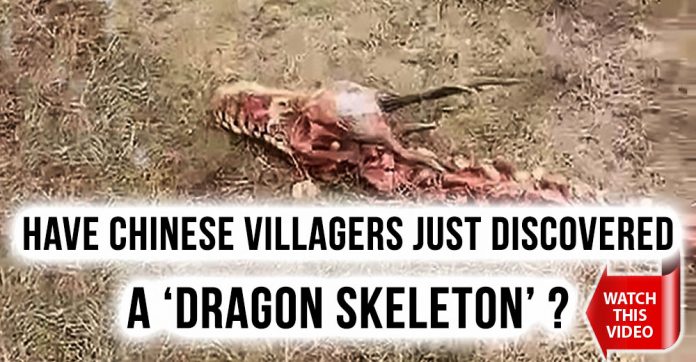 Yiap, you’ve read it right. A bunch of Chinese villagers are convinced that Dragons are not at all mythical but real. They seem to found their ‘proof’ after unearthing a 60ft typical Chinese dragon skeleton, although they are not sure how it got there.

The Footage with the Dragon Skeleton

An amateur yet quite clear footage, shows locals surrounding the ‘dragon skeleton’. It starts with a large skull with two typical horns, two relatively small arms and a spine that extends along the earth. Suspicious users on social media, wonder if the ‘dragon skeleton’ have been placed there intentionally, probably as a prop for a movie or a new Chinese TV series. However no one has appeared to confirm these claims.

The video with the Dragon was published by the AsiaWire. Watch the footage here.

Unlike the typical dragons depicted in Western mythology (and the Game of Thrones), their Chinese cousins, have little wings and fly by somehow floating through the air. Local authorities in Zhangjiakou, the area where the ‘corpse’ is found have also yet to release a statement about these odd remains. What do you believe?

Although we are not convinced – and trust me, we believe in dragons – what about you? Tell us what you think.