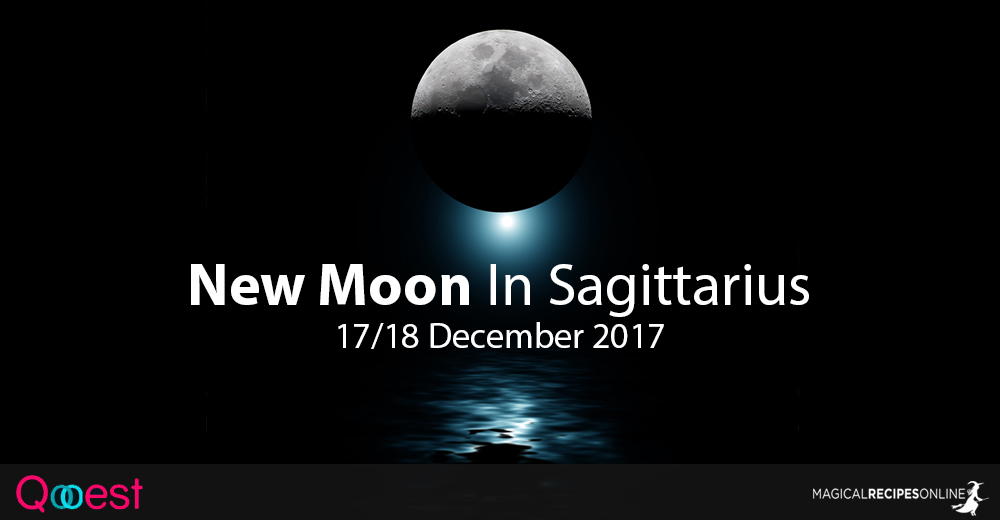 General Predictions for the New Moon:

On December 18 2017 at 06:30 UTC the Moon meets the Sun in Sagittarius and form the New Moon. The New Moon itself is formed under, mostly, very auspicious influences. But even more importantly there is a huge change in the focus of the astrological energies during this lunar month.

Pluto is in Capricorn already and will remain there for some years, but as you may remember, until November it is in a beneficial hexagon with Jupiter in Scorpio. During this lunar month, 4 more planets will enter Capricorn. This is a huge focus on the zodiac and what it represents for each of us. Additionally, Scorpio, which has regained its power when Mars entered the zodiac, will become even stronger now. Not only Mars, is from now on, in conjunction with Jupiter, but also Jupiter and Mars will form auspicious hexagons with the planets in Capricorn. These will empower both Capricorn and Scorpio and the influences of the planets there.

Please do refer to the Jupiter in Scorpio and Mars in Scorpio articles, as the influences presented there will be very vivid during this lunar circle.

The first and foremost planet to enter Capricorn will be Saturn, on December 20, Yule’s eve. Saturn will remain in Scorpio for three whole years, until December 20 2020. This changes greatly the scenery for Sagittarius and Capricorn, but also for all of us. The good news is that Saturn is always kinder when in Capricorn. Also, Sun is and will remain in conjunction with Saturn for the whole waxing Moon. Right now, Mars still supports Saturn, too. Not to mention that Saturn, for sometime now doesn’t have any considerable long lasting stress upon itself, and this will continue until March. So, the strict teacher is in high spirits. This is always a good thing! Less effort produces greater and long lasting results.

The second planet to enter Capricorn will be Sun, just a day after Saturn does. Of course, this means Yule will take place during this waxing Moon period.

A few days after the Sun, Venus, already in conjunction with the Sun, will enter Capricorn as well. This will happen on December 25. The accurate conjunction between the planets will happen on the 9th of January. This will be a very bright day, astrologically speaking, as Sun, Pluto and Venus will conjunct each other accurately. Pluto will start noticeably interacting with the Sun-Venus conjunction just a few days before the Full Moon, but it’s latent influence can boost love magic during Yule.

Finally, before either Sun or Venus exit Capricorn, a few days before the next New Moon, on January 11 Mercury also enters Capricorn. By doing so, five of the planets will be in Capricorn, and for almost three days six, including the Moon. This is a huge concentration of energies. Add to this the input of Jupiter and Mars from Scorpio and Neptune’s input from Pisces, all of them beneficial, and you can understand that almost the whole planetary system supports and empowers Capricorn.

So, what do all these actually mean?

Spirituality changes during this period. Although both magic and meditation were strong for the previous lunar month, and so was their ability to manifest their results, our tendency to use them for everyday subjects was not that strong. Now it becomes so. We tend to engage metaphysical means in order to benefit our everyday life and to further our material goals. And with great potency of success too.

Meditation loses its first place of power. Now, filters and potions become stronger. Magical perfumes and oils too. Talismans also become more powerful. So, use any or all of these for whatever you want to achieve. Of course engage other methods you are more familiar with, as well, but charging talismans, perfumes, oils and filters can be an exceptional helper in your causes.

Spirits and their presence also become important. Ancestors, guardian angels, spiritual guides and all sort of spirits are more easily approached. Be careful though, as negative spirits can also approach you more easily. Channelling and praying can give very good results during this period. Elves, fairies and other astral and ethereal beings too. With Jupiter from Scorpio in hexagon with Pluto this is true for the whole 13 moths period, but even more so during this lunar month when Pluto is exceptionally strong and even more supporting influences are present.

Metaphysical studies also change, whether you search and study on your own, or in some sort of school. We seek knowledge we can use right away to improve our daily lives. We don’t study, or practice, spirituality for the sake of it. Now, we do it for our own sake. Spiritual, magical, or energy healing, can be one such example. Even more, it’s an area which receives a great amount of beneficial energies. This is not the time of the priests and priestesses, if you excuse the expression. This is the time of the Wizards, the Sorcerers and the Witches! Magic is not the Art. It becomes an applied art.

With the exception of those who were born under the sign of Leo, have their ascendant there, or Leo is very strong in their natal charts, physical health is influenced mostly indirectly from the planetary positions.

Medicines and their use are influenced. Your health specialist may give you a better, or more effective medicinal treatment. In some cases, even without changing the treatment, its effects will become better. So, if you are taking any legal drugs, be thorough, and also careful. Accidentally taking and overdose, or forgetting to take your dose, are both very possible to happen.

Addictions also become very strong under a very active Pluto. Drug addiction, alcoholism, smoking, and any addiction can go out of control. Please be careful!

Because of Jupiter’s and (indirectly) Saturn’s influences over Pluto progress in pharmaceutics can also happen. Whether this will come to light, I don’t know, as the period is short, and the progress may not be enough for the new drugs to reach the market. But it will happen. Unfortunately, this influence illegal and dangerous drugs, too.

With a so very active Pluto, psychological health is something we should take good care of. Those who have mental, or psychological problems should be very careful and take a very good care of themselves. This refers both to those under medication, and all the rest, however well you can control your situation normally. Be thorough and careful with your medication, if you take any. For the rest, crystals and botanicals can be very helpful to maintain a good psychological health and condition. Of course, ask your doctor before using the botanicals.

With so many planets in a zodiac of Earth, money will be important during this period. Saturn, being in the game, will ask for our efforts, of course, but won’t make things really difficult. As we said, it is in a good mood. So, do your best, to make and save money. And this goes especially for Sagittarius and those who have their ascendant there, or they have the sign very strong in their natal charts. Saturn will remain in your money house for three years, and won’t be in good mood all the time. So, make the most of this bright period.

Whatever you want to buy, search well. The retrograde Mercury has a tendency to cause some problems and delays in our purchases, but this is not the only reason. Both Jupiter in Scorpio and Saturn in Capricorn, independently, call for saving money. Search more and find the best deal you can for whatever you want to buy. But, avoid stinginess. Although this trend will be stronger when Saturn will start receiving stress, it will, occasionally, appear during this month. Avoid it. Stinginess and wastefulness are both poverty energies. Not energies of wealth and abundance.

Jobs or other sorts of occupations that can help you become famous, or more famous, receive great attention. We may feel a need to engage ourselves with such jobs. Make sure that this is what you really want to do, though. There is great potency right now, and the path looks easy, but in the long run, it won’t be. But if this is what you want, go for it, and go for it now!

If your work is of this kind, such as if you are an actor, a singer, a politician, or anything that keeps you under the spotlights, then this can be a great period. Many opportunities to better your image and raise your popularity may appear. Sometimes, though what can give you a great immediate boosting, may be a future disaster, so be wise. Also, fame and infamy are supported just the same. So, be careful to avoid scandals.

Jobs and business about medicines, energy and spiritual healing, perfumes and psychology, receive also a great amount of energies. During this lunar month, mostly beneficial. If this is your line of business, then this is a month to do your best. Mercury turning in direct motion and then entering Capricorn will make things even better.

Any other kind of business can also progress during this period. Earth element is very strong, after all. But they simply don’t receive as much focus.

Venus forming nice long lasting aspects one after the other will keep luck in finding a new relationship active. This is especially true for Virgo and Cancer and those having their ascendant there, or they have any of these zodiacs strong in their natal chart. From the eve of the Full Moon and then Taurus will join the game, as its ruler will be in conjunction with its love planet, until the next New Moon.

But, this period is not a hunting period. It is a period of intimacy. Sexual and non sexual intimacy is important for our relationships and we seek it. This affects our friendships as well. The need of intimacy, not of sexual intimacy, of course. Then again, an intimate friendship can turn to a romantic relationship. As said, intimacy is important.

Of course, Mars in Scorpio, along with Jupiter there, keep sexual satisfaction important, and this will become even stronger as they will form a hexagon with Venus in Capricorn. But, Jupiter from Scorpio also demands intimacy. So this will be the key factor.

Relationships where we fell safe to be ourselves and very connected to the other party, will have a nice period and will become stronger. Relationships that lack this characteristics won’t feel satisfactory, and will face problems. If you want to keep your relationship and make it better, then don’t wait. Make the first step to come closer to your special somebody.

So, this is the general scenery under which this New Moon is formed. The predictions about how this New Moon affects each of the zodiac signs is here.

That’s all. Have fun and enjoy this New Moon.