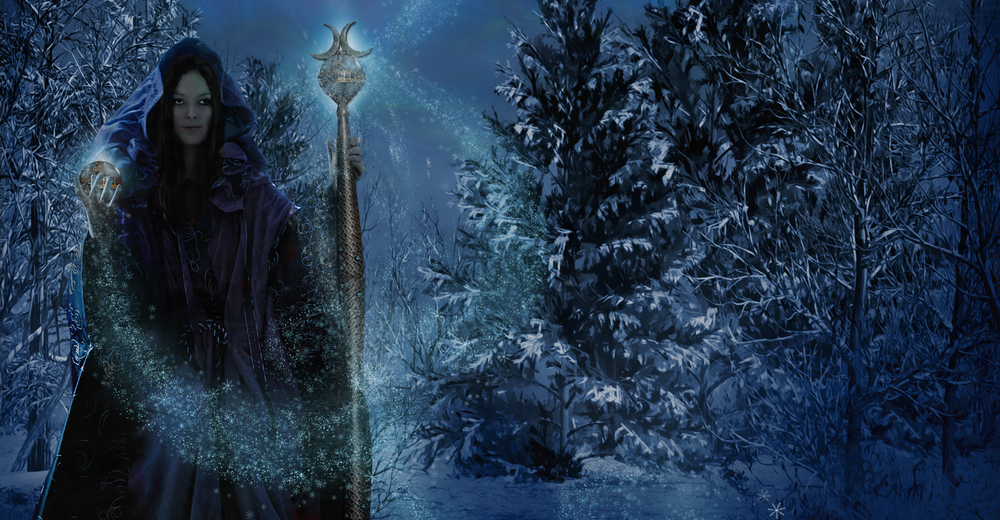 You are probably familiar with the terms Yule and Yuletide. Both are used in the sense of Christmas and Christmastide. The words however carry certain undertones that relate to the pagan traditions in pre-Christian Europe, especially to the ones of the Germanic peoples.

The Online Etymology Dictionary of English provides the following information:

“The Old English (Anglian) word cognate giuli was the Anglo-Saxons’ name for a two-month midwinter season corresponding to Roman December and January, a time of important feasts but not itself a festival. After conversion to Christianity it narrowed to mean “the 12-day feast of the Nativity” (which began Dec. 25), but was replaced by Christmas by 11c., except in the northeast (areas of Danish settlement), where it remained the usual word.”

In Scandinavian languages, the versions of the word Yule straightforwardly mean Christmas. For example, Merry Christmas in Norwegian, Swedish and Danish is actually god jul.

In these lands, it was Haakon the Good, a Norwegian King from 934 to 961 that tried to Christianize his country. In his attempt, he ordered that the Yule festivities should shift from having the Winter Solstice as a starting point at the 25th of December. So, they would coincide with the continental Christmas ceremonies.

Gradually, as it happened everywhere in the ancient world, the heathen cults withdrew as religions. Still, certain of their traditions survived and were embedded in the modern religion.

It is difficult to reveal the exact cult content of Yule and probably it differed from nation to another. The researchers associate it with honoring Odin, the Father God of the Germanic tribes, the legend of Wild Hunt (a procession of ghost hunters in the winter sky) and the Modranicht (Old English “Night of the Mothers” or “Mothers’ Night”), a sacrificial festival that was taking place at what is now Christmas Eve. Winter Solstice should also have been crucial in all these festivities.

One of their rituals required a sacrificial wild boar to the god Frey of fertility and farming in hopes for a productive season.

The wild boar would be prepared, cooked, and eaten. If you have a Christmas ham in your household now you know where this particular tradition came from.

According to this site, the Vikings would also prepare a Sunwheel that resembled to the Christmas wreath. What is more, they decorated a large oak log with runes and other symbols. This is how the Christmas tree tradition emerged.

Other traditions that the Western World still practice today is the Yule Log, Yule goat, Yule boar, and Yule singing.

In a post, the “Lady of the Labyrinth” writes: “The Yule celebration as a whole was often referred to as “drinking jól”, as in “to drink” yule. This descriptive term strongly suggests that drink was an important part of the celebration. We also know that apart from drinking a lot, there would also be feasting, banquets, games and song – and sacrifice to the gods and other powers of winter.”

Quite similar to the case of Yule, the Christian festivities replaced Ancient Greek and Roman festivals though the Christian world incorporated ancient traditions.  On the 17th of December, the Romans celebrated Saturnalia. The festival was dedicated to Saturn (Latin Saturnus), the father of Jupiter. The name Saturnus was etymologically connected with the Roman word for seed and sowing (Latin satus). Τhe Roman deity Saturnus was supposed to stem from the Golden Era of humanity. Although he was an equivalent to the Greek God Kronos, Saturnus was a more romantic depiction of the agricultural spirit of the traditional societies. As we read here, “he was thought to have ruled when the world enjoyed a Golden Age of prosperity and happiness, hence the general frivolity of his festival”.

The good spirits of the ancient tradition may have played a role in the way the Christian world adopted Saturnalia. The Christian festivity was not anymore only a way to manifest piety but also an occasion for mirth and celebration. During Saturnalia, the seasonal greeting was “Io Saturnalia!”. The first word, io, was an interjection showing emotive exclamation or invocation, used in triumphant fashion but also ironically. The salutation was so common that reminds of the omnipresence of “Merry Christmas” nowadays.

An interesting part of Saturnalia is that fact that along with the general joy among the population, there was also a reversal in social roles, with slaves wearing fine garments and sitting at the head of the table. Families gave each other gifts, and homes were decorated with wreathes and greenery. Gambling was allowed and the festival is described as a joyful period, according to this BBC article.

Over-eating, drinking, singing and gift-giving are all things that we associate with Christmas – another, more modern, season of goodwill.

The 25 December was dies natalis solis invicti – the birthday of the ‘invincible’ Roman sun-god Sol.

Cancelling Saturnalia was unthinkable, so Christian Rome converted it to a Christian holy day instead.

We can imagine that for many decades the Heathen and the Christian festivities coexisted, not without tensions. Even if Christianity was gaining power, since it gradually became the state religion of the Roman Empire, the population was not ready to give up the old habits that were well rooted into the collective memory. Therefore, the Christian religion embedded the old customs.

In modern Greece, it is quite widespread for children to sing the carols at Christmas and New Years Eve in every neighborhood. In some cases, they hang tree branches on the doors. In Ancient Greece there was a similar tradition. A branch of olive or laurel was covered with wool, fruits, cakes and olive flasks, dedicated to Apollo and carried about by singing boys during religious festivals. This was called Eiresione. Moreover, in the first day of the year, a sort of pie is shared in every Greek house. The pie is called Basilopita, a name that has to do with Saint Basileios, the Orthodox Greek pendant to Santa Claus. In the pie there is a hidden coin and if anyone finds it gets presents from the whole family. It is however interesting that the first pieces of this sweet pie are offered to Jesus, the Mother of God and Saint Basileios. This offer is reminiscent of the seed and plant offerings in Ancient Greece that did not include blood sacrifices.

Celebrate in an all-embracing spirit

The reference to the pagan roots of Christmas traditions should not be regarded as an attack to the spiritual message of this period. It is the view of the author of this article that it is preferable to have a spiritual stance towards Christmas than promoting a materialistic approach, as we do when we make reference to “season greetings”. Religions are historical phenomena, they adapt to circumstances and adopt elements from other traditions. From our point of view, we can observe this synthesis and understand how human spirituality is manifested in various ways going through several transformations.

PREVIOUSIt’s Almost Official: UFOs are Real. Aliens are Here.
NEXT1st to 7th of January: The ideal time to initiate goal realization and self-fulfillment