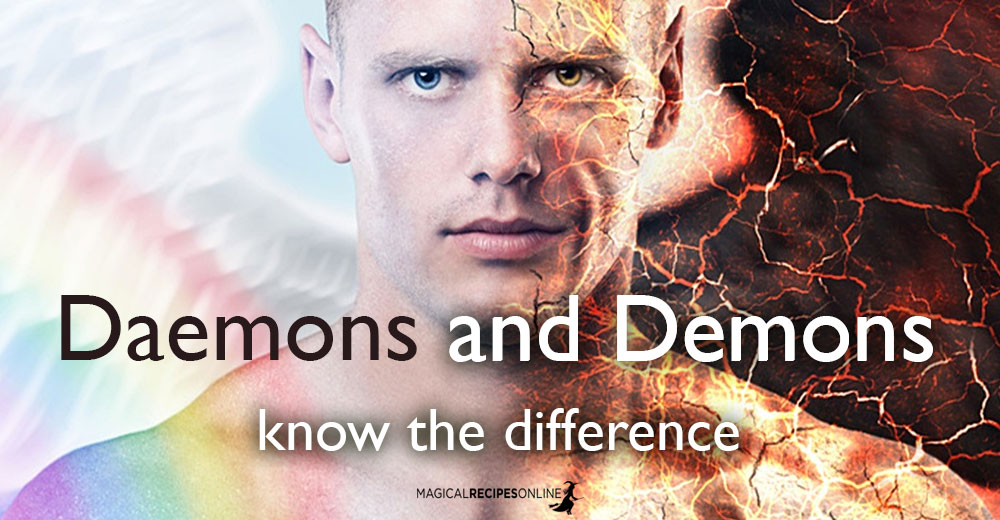 Demons, demonic spirits or demonized: what pops up in your mind when you hear these words? Evil, malevolent, supernatural spirits that cause distress and terror. And definitely nobody would like to deal with them.

But what if we tell you that many centuries ago, speaking of ‘demons’, or rather for ‘daemons’, was not a bad thing at all. On the contrary, in Ancient Greece daemons were understood as divine entities, protectors of individuals, patrons of regions or spiritual beings stemming from the souls of brave men that lived in the Golden Age. The ancient author Hesiod wrote in his “Works & Days” (verses 121 -123 on):

“And they [= the Golden Generation of humankind] are called pure spirits [i.e. daemons] dwelling on the earth, and are kindly, delivering from harm, and guardians of mortal men; for they roam everywhere over the earth, clothed in mist and keep watch on judgements and cruel deeds, givers of wealth; for this royal right also they received”

The best way to examine what the ancient daemons were, is the very origin of the word, its etymology. Indeed, according to this dictionary ‘daemon’ comes from Greek ‘daimon’ meaning “deity, divine power; lesser god; guiding spirit, tutelary deity” (sometimes including souls of the dead);. In turn, the word is derived by a verb meaning “to divide or distribute destinies”. So, the initial meaning was associated with the fate bestowed upon each human.

Daemons were not deities but represented an intermediate stage between gods and mortals. They resemble Latin Numina (Numen in Singular). Daemons were not necessarily entities. They could refer to divine energies or state of minds and other qualities.

The idea that a daemon was somehow an energy inspiring the individual is best captured in the way Socrates argued about his urge to admonish his fellow citizens:

“Perhaps it may seem strange that I go about and interfere in other people’s affairs to give this advice in private, but do not venture to come before your assembly and advise the state. But the reason for this, as you have heard me say  at many times and places, is that something divine and spiritual [“daemonic” in original text] comes to me…” (Plato, Socrates Apology: 31c.d.)

What Socrates reported as a divine voice, the “daimonion” (‘the daemonic one’) speaking to him was used by his prosecutors against him. Socrates was accused of introducing “new daemons” and thus of aspiring to replace the established gods, as the author Xenophon reported:

Indeed, it had become notorious that Socrates claimed to be guided by ‘the deity:’ it was out of this claim, I think, that the charge of bringing in strange deities arose. (Xenophon, Memorabilia 1.1.2)

Socrates was  a philosopher who was aware of the fact that wisdom is divine and for this reason he wanted to show exactly that what he knows is a gift that was given from powers that rational mind cannot always capture. Similar is the case of the artists. Many centuries after Socrates, Jim Morrison, the  great rock star dies. What connects them is the fact that on Morrison’s grave there is a bronze plaque with the following inscription: ΚΑΤΑ ΤΟΝ ΔΑΙΜΟΝΑ ΕΑΥΤΟΥ.

The plaque was placed by Morrison’s father after he consulted a professor of Ancient Greek. It is usually translated as “true to his own spirit” or “according to his own daemon.” 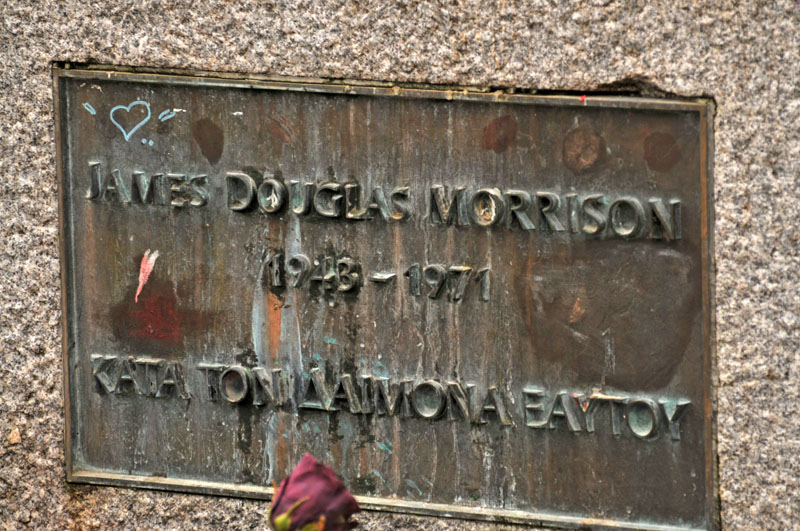 Jim Morrison’s grave with the inspription featuring the phrase “According to his own daimon” in Greek. (Credits: seattlestravels.com/visiting-jim-morrisons-grave/)

The demonization of the Daemon

So, there is a daemon in every creative and spiritual power. Sometimes, this can inspire us, sometimes though it can consume us. In all cases, it is powerful and sprouts out of the unseen energies of nature.

Well, it seems that Christianity did not endorse the concept of daemon. Powers outside the ones sanctified by the church appeared to be evil and therefore should be banished. This is something we have already seen in our recent article about Pentagram, namely how a symbol of good Magic and Fertility came to be representative of evil.

How “daemons” or “demons” were vilified by the new religion is best shown by this excerpt of New Testament found in Matthew’s Gospel:

“When he arrived at the other side in the region of the Gadarenes, two demon-possessed men coming from the tombs met him. They were so violent that no one could pass that way. “What do you want with us, Son of God?” they shouted. “Have you come here to torture us before the appointed time?” Some distance from them a large herd of pigs was feeding. The demons begged Jesus, “If you drive us out, send us into the herd of pigs”. He said to them, “Go!” So, they came out and went into the pigs, and the whole herd rushed down the steep bank into the lake and died in the water.

Daemons are not welcome

Consider that in the Ancient Greek original text there is no difference between ‘daemon’ or ’daimon’ and ‘demon’. This is a single word. This means that the term that the concept that the Ancient World for centuries used positively, was now charged with a negative interpretation. As put in the following passage:

“Christianity demonized all spirits, no compromises allowed. To be a Christian meant to deny other competing spirits; to fail to do so was a sin; the price: burning in Hell. As Christianity became a world power, this doctrine was carried all over Earth. People were taught that spiritswhom they had previously venerated had, in fact, tricked and fooled them. The Church didn’t deny that spirits delivered favors but interpreted these gifts as containing deceptive hidden costs: hellfire and damnation.” (In The Encyclopedia of Spirits: The Ultimate Guide to the Magic of Fairies, Genies, Demons, Ghosts, Gods, and Goddesses by Judica Illes)

Since the reference to demons is tinged with negative connotations, it seems necessary to draw the distinction between the malicious and the benevolent entities. The former ones are then the ‘Demons’ and the latter the ‘Daemons’ (sometimes also rendered as ‘Dæmons’). Demons are entities who thirst for more energy, feasting on their victims.

The fact that the demonization of the term ‘daemons’ is absurd, should not keep us from the truth, that demons – evil spirits do exist, and we should never mess with Black Arts and Demonological grimoires.

Still, we should bear in mind that both words have the same origin and there is nothing inherently evil in using the word ‘demon’ instead of ‘daemon’ or ‘daimon’. However, given the abuse of the term, the spelling ‘daemon’ or ‘daimon’ is less charged with negativity. This is why several interesting publications like these below feature these alternative spellings:

The Daemon: A Guide to Your Extraordinary Secret Self by Anthony Peake

Embrace of the Daimon: Healing through the Subtle Energy Body/ Jungian Psychology & the Dark Feminine by Sandra Lee Dennis

On the other hand, ‘demon’ is always regarded as a bad spirit we have to confront and annihilate. This is what the heavy rock band Kyuss also sings about:

I’ve got the demons in me

I’ve got to flush them all away

I feel the demons rage

I must clean them all away

What we should do then is to venerate our personal daemon, the divine energy within us, the protector of all our good deeds and the spirit that encourages us to become wiser and more creative.