Humans have always been dazzled by starring at the marvellous night-sky. Observing the miracle of creation makes us feel unique yet also part of something (much) bigger. There are many names given to the Lady of the Night-sky, the Moon. Moreover, there are many epithets of the Moon given by every civilisation ever existed, trying to define the qualities of each Moon. In our Magical Guide to Full Moons of 2020 we are going to explore the magical powers, in which every Full Moon is capable of.

Always remember the powers of the Full Moon is very potent in all magical work. To amplify these powers, we always suggest using magical herbs and resins associated with the Full Moon or of course our special blend for the Moon.

Magical Guide to Full Moons of 2020

There is an endless list of names given to the Moon, which can be found in civilisations like the Chinese, the Greek, the Celtic, even in New Guinea and Native american cultures. Each civilisation which follows a Lunar Calendar like the Chinese, the Native Americans etc often name “each month’s moon” in order to define the time of the year. The names were given for example after deities which were worshiped during this time of the year or practices of tribes which were popular.

The Names of the Moon are many and this is because each civilisation – and even each tribe – used a different code. Yet in the following list we list 12 names which seem common in both European & Native Americans.

The Night falls heavy on the dark forests and everything seems to sleep. Silence conquers the freezing air and the old woods stand proudly until the howling of the Wolves chills the human blood as it sounds like an invocation to the Moon. The Wolves have long been associated to the Moon and its deities. Artemis/Diana, Goddess of the Moon have usually been accompanied by Wolves.

In  Metamorphosis, the magnificent work of Ovid the Latin poet includes the story of Lycaeon (Lycaeon=Λύκος in greek = wolf, where the word lycanthropy comes from) who was turned into a wolf by Zeus after insulting the Gods for serving human meat to them. Magic of the Wolf Moon relies on how wolves interact with each other. Wolves go in pacts, like us, humans. Wolf society have leaders and strong family bonds.

Magic and Spell casting during this Moon is extra powerful when trying to strengthen your family bonds. Spells to increase your leadership virtues are also favoured.

The Winter is still powerful and the snow falls over the land. The food resources grow thin and everybody waits for Spring although there is still much time. Snow is believed to be more common in February rather than December and January according to folk beliefs. It is also known as Hunger Moon due to the lack of food in the last month of Winter. Magic of the Snow Moon relies on the pure and absolute qualities of snow itself. Invoking the powers of the Snow Moon is benevolent for refreshing and purification purposes.

Do you want to start anew? Are you sick and tired from the past? Break all the barriers and celebrate your freedom under the Light of the Snow Moon!

The Air gets warmer and silence is ending. Tiny vibrations from the Earth shake Winter’s throne. As the ice and snow begins to melt and the ground is watered and softened, earthworms appear digging holes preparing the land to be fertile again. Something is changing rapidly although in the beginning there were only worms.

Spring is here. What would you want for Spring? Are you ready to start your life ? The Magic of Goals and Opportunities can be marvellous under the Worm Moon. A perfect Magical idea for Worm Moon is to bury under fertile land a piece of paper with your goals – it always has to be fertile! – Let the worms take this energy deep in the heart of our Mother Earth and wait for the “seed” to flourish and bloom! We trust the seed to flourish!

The fertile soil has been watered and plants have grown. The Green conquers the land until Flowers begin to bloom. Mother Nature celebrates its resurrection with vivid colours. Another reason that Pink was picked for the April’s Moon is because it is also the color of Venus, the Governor of Taurus. Egg Moon is an alternative name given to April’s Moon due to its close connection with Ostara (Spring Equinox).

Let the Pink Moon affect your romantic life. Trusting the energies of the Pink Moon will help you in Romantic spells. It’s the time when two become one. Moreover, it’s a wonderful time for beauty spells too! Work your magic then and enchant your love life. Let your life bloom!

May Magic: The Flower Moon (May 7th)

It is happening all over. The Flowers conquer all lands and the animal kingdom begins to celebrate the new fruitful time. Bees gather around flowers and birds play all over them. Everything seems to grow bigger. Everything seems to become greater, fancier and better. Its officially the Era of Flowers.

The Era of Flower Moon is also the Era of productivity and creativity. The Magical energy is so intense and is very handy even for the novice practitioners. Use this magical energy for Fertility spells and everything you want to create! 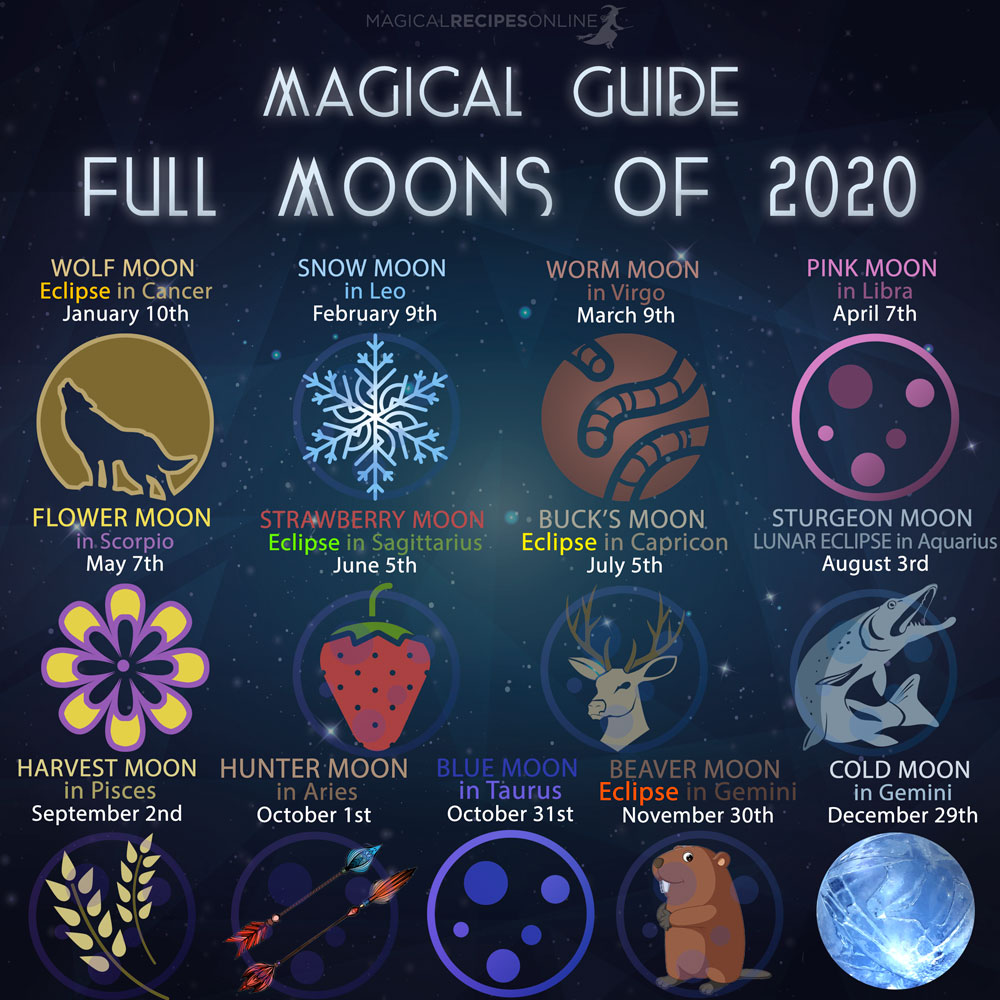 For many tribes this is the peak of the Strawberry picking season. This is the time when we feel right and full. Fruits and heat are the keywords defining the era of the Strawberry Moon. Our fertility spells have worked miracles and now we taste the results of them.

Use the powers of the Strawberry Moon for prosperity and abundance spells. All over nature everything is free. Prosperity is your right, your birth-right! You own the World along with all beings. Use this energy to expand your life and conquer more!

The Buck deer walks proudly over the green land enjoying his life in harmony. Eating fresh green worts, playing with birds and running towards rivers. The Buck Moon is the era of obvious success of Nature. Everything happened according to plan. This year is one more success of Nature. And the magnificent Buck knows that.

The energies of the Buck Moon can be used for any success spell. Use it to charge charms to help you succeed in everything. Use the Buck Moon to take control of your life.

The Great blue Lakes are filled with life. The Sturgeon is a large fish often spotted in these lakes. The message is clear. The Waters are calm and seem to connect all nature. The Lakes seem to “communicate” will all waters, the seas, the rainfalls, the rivers and the oceans. Everything is connected. We are the Sturgeons who swim in these Lakes.

We are full of energy and know we are ready to make a step further. Using the energy of the Sturgeon Moon we can connect better with each other and look for people who share the same interests as us!

The Autumn has arrived. The corps are ready to harvest and the Wine is prepared. Wine is the ultimate harvest. Not only does it embody the essence of harvest but it also transform is to a potent magical potion capable to lift our spirituality. Remember that Wine is sacred to many religions – including Christianity – and is used as a portal to alter our awareness.

A magical tip would be to bless a glass of Red Wine in order to help you open the Gates to other realms. Ask for blessings to charge the Wine in order to become a powerful tool for divination and prophecy.

Nature’s pace is slowing down and the animal kingdom feasted over the fruitful land for months. It’s time for a hunter to aim for what is now needed. Hunting Rites are very common in Ancient Religions as they symbolise our will to fulfil our lives with what’s missing. Hunting was considered sacred as the ancient hunters honoured the hunted animal in many ways. They always tried to end the life of the prey with a quickest and painless way possible. Blood of the hunted prey which was spilled was considered sacred. Again Diana/Artemis, Goddess of the Moon is associated with the Hunt.

Blood is the essence and carrier of Life’s energy. Honour your blood and raise your energy. It’s the perfect time to empower your every cell and strengthen your aura. Be the hunter and the prey, embrace all nature and connect with Her divine forces. It is also the time to connect with your animal instincts and come closer to the animal in you.

This magical guide to Full Moons of 2020 has something special. Blue Moon. But what is a blue Moon? To be technical, there are a few definitions of what a “Blue Moon” is, and then there is a modern definition of the term, so let’s start there.

The term we know well, and is widely accepted. The Blue Moon is when there is 2 Full Moons in any single month – where there is a Full Moon at the start and the end of the month. The Full Moon on 31st July is such a Moon. The average span between 2 Full Moon is about 29.5 days (this is only on average, sometimes it’s more, sometimes it is less. It depends of the Moon’s position in relation to the earth and their respective orbits.) This terms is said to have derived from a misunderstanding in the ‘Maine Farmer’s Almanac’ – where it stated “the blue moon is the third moon in a season that has four full moons.” The reason why the third moon is chosen to be identified is very long, and very complex, and it has to do with the Christian Ecclesiastical Calendar….

The Blue Moon holds double the potency of the other Full Moon’s in the year, so if you are looking for long term results, cast spells, or make wishes during a Blue Moon.

The Days are significantly smaller and the temperature decreases dramatically. We are now preparing for Winter as we walk down the last days of Autumn. The beaver knows what’s coming and humbly prepares for the challenges. The Beaver works hard and comes back to the nest with supplies for Winter’s cold nights.

The Beaver Moon is the Signal that it’s time to focus on indoor activities.  As the beaver is always prepared so should we. Beaver doesn’t try to impress anyone, but always succeeds. Let’s prepare ourselves for what’s coming and finish our unfinished business.

Winter is here, powerful and dominating. The Truth is simple now. Everything falls only to rise again. Right now the energies are slow, cold and dark but this is only one part of truth. Cold signifies the lack of energy. But what’s missing is only a breath away.

The Cold Moon is a great chance to light up your candle Magic. Melt the cold from your heart and let the sorrow flow away from you. Light symbolises hope and a new beginning. In the Winter Solstice the Sun God dies and is reborn. Tap into this energy. Light a candle and wish for change!

We wish you a Magical Year. May the Magical Guide to Full Moons of 2020 be a beacon of magical light to guide you. Remember, the Moon still shines, even when it rains!

How to capture the energies of each Moon?  Use the Lunar Water Recipe: https://www.magicalrecipesonline.com/2013/07/ancient-magical-recipe-lunar-water-how.html

Want to learn more about the phases of the Moon and spell casting?  Refer to our guide: https://www.magicalrecipesonline.com/2015/11/the-moon-is-boon-spellcasting-and_5.html

Do you want to learn more about Eclipses and Magic? See our article at: https://www.magicalrecipesonline.com/2012/06/nature-of-eclipse-magic-and-spells.html