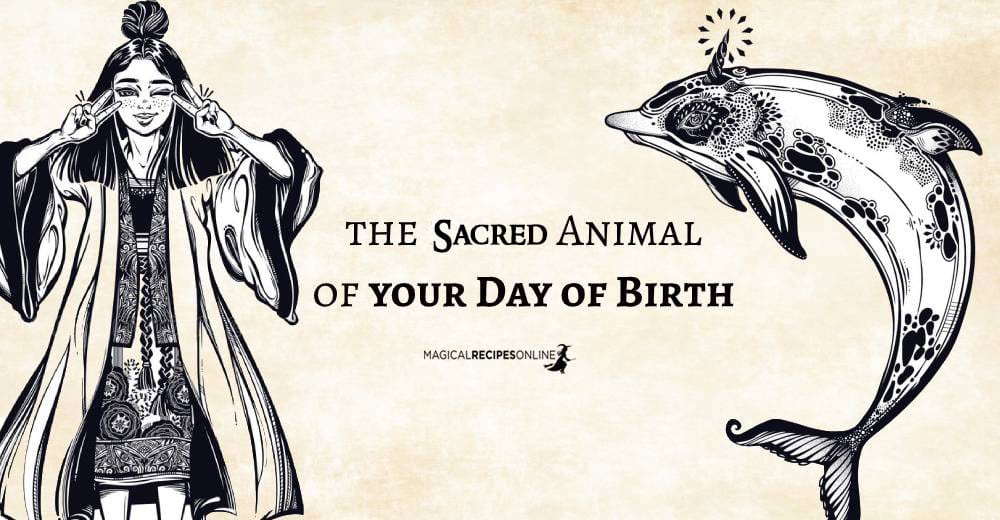 Welcome to another Lesson of our School of Witchcraft. Tonight, we will examine how each day of the Week was and still is associated with one Archetype Sacred Animal and what does it mean. Therefore, we will see what blessings are given to each individual who is born under the influence of each day. Although, this sacred animal rules the day, you may also be under the influence of another spirit or sacred animal.

Everyone has a Sacred Animal

Animal Guides or Archetype Spirts, come to us for many different reasons, but they usually have a reason that can be group into life-long guides, messengers, tests or journey based guides. Although each of us is somehow ‘linked’ with the physical world with one sacred Animal, many of us encounter more Spirits which act additionally to the Primary sacred animal.

Therefore, each of us ‘has’ one sacred Animal but we may also be guided in our lives by additional ones when times is needed.

Note. Totem Animals were introduced widely by the Native Americans yet many ancient civilizations share their core concept (ancient Egyptian, ancient Greek etc). However, this article does not try to replace the rich culture of Native Americans, but give a different point of view.

Every Day is Magical

We’ve been through this a couple of times before yet it’s always interesting to remember. You see, back in the ancient times, the ‘Magical’ or ‘Astrological‘ planets were just seven. The discovery of Uranus, Neptune and Pluto came much later, although the have been prophesied by the alchemists.

As the ‘Planets’ were seven, the ancient ones observed that there is a 7-day pattern, with each day radiating separate energy. Thus, they created a ‘week’ based on these seven different ‘planetary days’.

Therefore, each day is drenched in the power of the Planet, which is of course associated to a major deity. Thus, we can find our personal sacred animal which ‘rules’ over the day we are born. Once we find it, we can ‘summon’ it during the same day of the week we were born and let it guide us. To do that, we can keep our ‘birthday’ candle, from the last birthday cake. Although, you can substitute it with any white candle, the birthday candle is more appropriate. Next birthday… keep it! 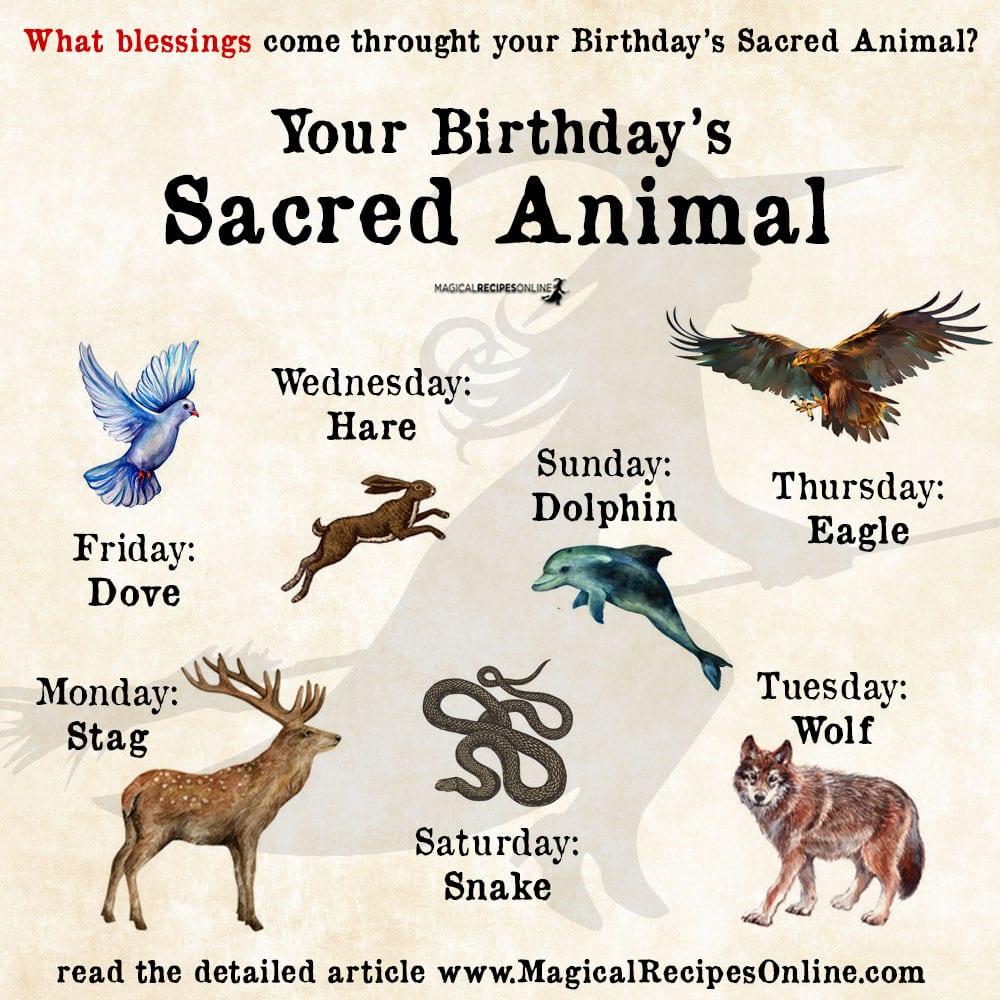 Create an appropriate offering. You can get some cookies or a small cake, or a dish of honey and milk. Burn some Benzoin to invite the higher entities you look for. Now put the candle before the offering and once you light it up, say the next words.

I ask for you guidance,

Now close you eyes and visualise this spirit coming to you. Once it’s there, greet it properly and offer your cake etc. Tell the Spirit that you are now ready to be guided and ask it to advice you and guide you through the day. Wait for the signs. Write down your progress. Repeat, for 6 more (total seven) consequent weeks. 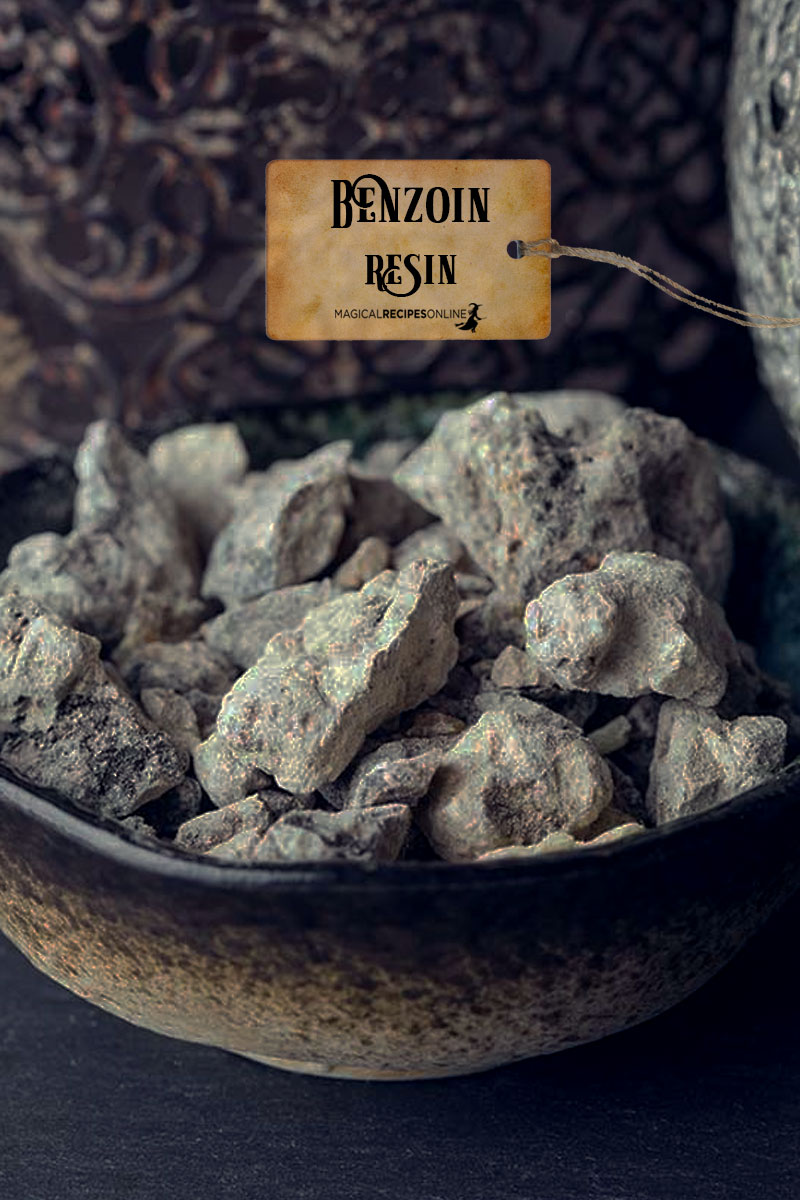 What your sacred Animal based on your Birthday?

Your birthday can reveal your sacred sacred Animal. Although we’ve been copied before (unfortunately most of the times without our permission), we should advice you that this article is created by the notes of the High Priest of the Sacred Phoenix, thus please remember who to thank for you good results. :)

Stag is the sacred animal of the wild huntress of Mother Earth, Artemis. This Spirit embodies the secrets of this world and the Wisdom of the Woods and the Wilds. Thus, the Stag can be summoned to nurture your intuition and make you more confident of your Magical and Psychic powers.

The Stag is also amazingly beautiful. Therefore, it bestows a charming and attractive aura. Use the power of this animal to attract whatever you wish. But remember, you wish should be noble, just like the Stag.

Wolf is the sacred animal of the God of War, Ares. It is no coincidence that this brave animal has been chosen by Ares (Mars) to be his sacred animal. Ares’ association with the wolf probably begins with the founders of Rome. In this story a she-wolf (lupa) nurtured and protected his banished twin sons (Remus & Romulus). Wolf is considered to bestow bravery and self-reliance to the ones who are born in this day.

Moreover, sacred animal of Wolf is summoned in times of need to bring order in chaos. Wolf can stand in chaos, as s/he is the one who can handle fears. Call upon the powers of the Wolf to give you spiritual guidance and protection.

Hare (rabbit) is one of the sacred animals of Hermes (Mercury). Although the naive see nothing special in this humble creature, the mysticists have a different opinion. Hare, is sacred to many occult paths and of course to all Hermetic (Hermes) traditions. As Hermes is the god of commerce and communication, travelling faster than anyone, Hare bestows quick reflexes and vigilance (spiritual and intellectual).

All who are under the dominion of Hare, are considered very magically potent and creative. The secret is in how quickly hare population grows. This intense growth was considered amazingly important. Call the Animal Spirit of Hare to grant you prosperity, vigilance and awareness of your mystical powers.

Eagle is the sacred animal of the king of the Gods, Zeus (Jupiter). It is very important however, to understand why the Eagle was chosen to this honourable position. Probably, because the eagle can fly higher than any other animal. From their position, Eagles can see the whole picture and understand the opportunities and flaws of their current situation.

Eagles choose their fights, avoiding worthless causes. Although they are always victorious they attack only when is needed. Therefore, Eagle can be summoned to give you a greater perspective of your current life’s situation and become more aware of its opportunities. Also, this exact ability can be used to Awake spiritually and realise your magical powers. Last but not least, summon the Eagle to ‘see’ what’s unseen by many and get what you deserve.

Dove is the sacred animal of the Goddess of Beauty and Love, Aphrodite (Venus). Therefore, amongst is powers is to bring love and peace whenever is needed. Doves are symbols of hope and peace not only in ancient Greece (and Rome) but also in the Bible and other religions. They were always regarded as pure creatures with the capability to bring energy renewal around them.

Moreover, Dove can be summoned to purify us from all psychic parasites and thus bring us in a new era in our lives. Dove can support us in our magical endeavours and bring self-awareness and more importantly self-love. This is its most important power, because this is the key to unlock our magical potential.

It’s probably the most underestimated and falsely accused animal. However, snakes are indeed, sacred to many religions, especially the Old Ones. Snake is the sacred animal of Kronus (Chronos – Saturn), the old God of Time. Hence, the symbol Ouroboros is a snake which bites its tale, in a metaphor of the eternal time. Moreover, snakes are also guardians of the magical secrets of the Earth. Once dethrones, Kronus became the God of agricultural fertility celebrated in Winter Solstice.

Summon the Animal Spirit of Snake to bring wisdom, reveal the secrets of this world and fight your fears. Also, the animal spirit of Snake bestows uncanny intuition and can aid towards healing process.

This may surprise you but Apollo, the God of Sun, Arts, Blessings, Love, Sports and Magical Wisdom has picked Dolphin and his sacred animal. Apollo, transferred the Priests from Crete to his holiest temple turning himself as a dolphin. Thus, dolphins are considered to the brightest of all animals and at the same time aware of the unseen.

The sacred animal of Dolphin bestows optimism and creativity. Also, it helps our communication skills, making us understood and charming. Finally, Dolphin can be summoned to guide us in our darkest ours and bring hope and clarity in our hearts and minds. For the same reason, Dolphin can reveal secrets and teach us the sacred and arcane arts of Witchcraft.