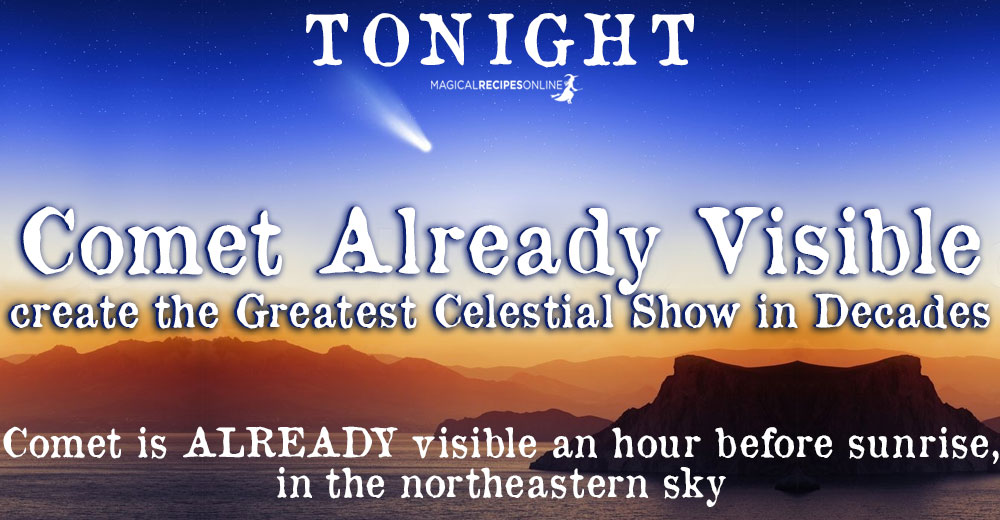 Alright guys, something really weird is happening the last months and certainly all can feel that. After 3 (!!!) Eclipses and while 5 planets are still Retrograde when I write this article, it’s surely a celestial chaos up there. Surely the astrological Predictions saw a darkness coming but I’m sure that all feel that something is missing. Well this might be it. Already Visible Comet Neowise approaching Earth might elaborate the Astrological Predictions. Comet is already visible to the naked eye. However, the object may soon brighten so much that it might create the greatest celestial light show in decades!

Newly discovered Comet Neowise (as it was first spotted on March 27) passed closest to the Sun on July 3, 2020 and if it continues to survive perihelion 0.29 AU (43 million km) from the Sun, it is expected to remain visible to the naked eye in July! Moreover, Comet Neowise is currently the brightest comet of 2020. Hence, this is a rare opportunity to glimpse a visitor from the outer solar system. Hopefully, according to researchers it should continue next week, when it will become even brighter.

Comet is visible an hour before sunrise, in the northeastern sky

Right now it’s located in the constellation Auriga and can be seen with the naked eye (!). Of course it’s more amazing with good quality binoculars or a just telescope. However, on July 12, Comet Neowise will be visible an hour after Sunset in the Northwestern sky! From the constellation of Auriga the comet will move as the month progresses rising higher from the constellation Lynx toward the Big Dipper. On July 22 the comet will reach its closest point to Earth—a distance of 103 million kilometers—before continuing its cosmic flight. Whether it will still be visible to unaided eyes by then is uncertain, however.

I have a strong dislike of early mornings—but so worth it today because wow is that comet beautiful! C/2020 F3 (NEOWISE) I was at Sunset Crater by 4AM. It was an easy naked-eye object, but really rewarding through binoculars. Last pic is closest to naked eye scale.#neowise pic.twitter.com/1I0Cx2fZQJ

Comet NEOWISE and the city of Toronto, Ontario, Canada ?! I was up really early for this shot. It’s not often that we get the opportunity to see or photograph a comet of this brightness and with a tail. I hope you like it!? https://t.co/BFyxFFw2DE pic.twitter.com/sGZBiEVryM

However, Comet Neowise doesn’t appear to be a newcomer. Astronomers calculating its orbit observed that it closely matches that of the Great Comet how passed Earth around 1843 – 1844.

Both comets appear every 6,000 – 6,800 years as this is how long they take to make one complete orbital circuit. In essence, both comets have circled the sun at least once, if not more than a few times. Therefore, last time this happened was around 4000bC, when we were building the Pyramids in Egypt.

The first time in human history a comet is documented is in Tulli Papyrus. A transcription of an Egyptian papyrus dating from the reign of Thutmose III (reigned between 1479–1425 BC). In general, the manuscript describes several sightings of glorious night-sky phenomena, inlcuding one that seems like a comet as “a marvel never before known since that foundation of the land of Egypt”.

Inca and Aztec priests and wizards the appearances of comets were seen as potent divine wrath striking back. A coment appeared as “a fire that burned in the night sky every night” 10 years before the arrival of Hernán Cortes and the other Spanish conquistadors, marking the end of their civilisation.​ 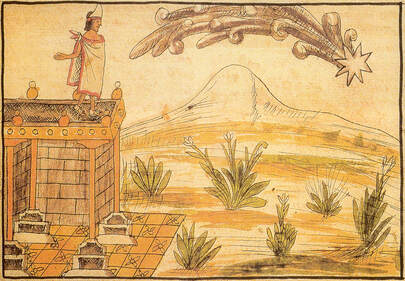 It’s true that Comets have a very long history, usually as omens and harbingers of change, which are commonly translated as bad news. The death of Julius Caesar was marked by a comet. Although this was a very significant event it as also perceived by Romans as a sign of his divinity. Moreover, Napoleon associated the appearances of comets with some of his strategic victories.

“When beggars die there are no comets seen;
The heavens themselves blaze forth the death of princes.” Julius Caesar (II, ii, 30-31)

It just one sentence, William Shakespeare sums up what ancients feared from this omen. A cosmic wrath to outbalance the Realm of the living.

Pope Callixtus III excommunicated Halley’s Comet in 1456 as an “instrument of the devil” associating its appearance with the Christian defenders of Belgrade from the besieging armies of the islamic Ottoman Empire.

Some believed that comets appeared as divine omens of Witches dark plans to overthrow the Inquisition’s authority. They thought Witches tried to align with the Comet’s magical powers to bring plague and diseases to the world.

Even later things didn’t seem to change a lot. Thomas Hartman in 1606 wrote the Kometspiegel (aka Comet Mirror) which is a pretty intense topic of what European tribes believed about comets. As you can guess, they were clearly omens of ill events. In Kometspiegel we read that:

“All comets indeed give evidence / of a lot of bad luck, affliction, peril and danger / and a comet never appears / to be cares without evil meaning / in general eight kinds of affliction occur / when a comet burns in the air:

Much fever, illness, pestilence and death,
Difficult times, shortages and famine,
Great heat, droughts and infertility,
War, rapine, fires, murder, riots, envy, hatred and strife,
Frost, cold, storms, weather and lack of water,
Great increase in people going into decline and death,
Conflagrations and earthquakes in many places,
Great changes in government.
But for us to do penance from the heart, God afflicts us with disasters and pains.” 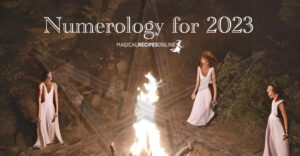