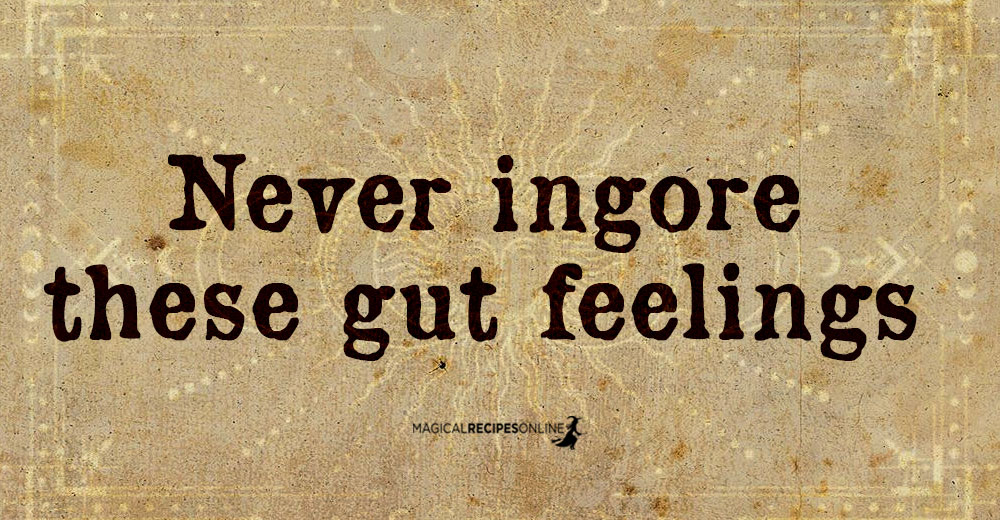 Ancients used to say that you’ve got 3 brains. One is in your head. The other is your heart. But there’s a third one, living in your gut. Recent research proved that there is an active axis between brain and gut, because of a primitive neuro bridge connecting these signals. But Witches knew that for millennia. There’s a secret connection which scientists try to prove. But they might not make big steps unless they acknowledge what we already know as arcane wisdom. Hence, there are gut feelings you should never ignore – because instinctive feelings are closer to our powers.

Why trust the feelings of your guts you say? Let me give you a very important example. The Zodiac Sign which is mostly associated with reason is Virgo. Virgo’s glyph represents intestine – your guts. Also, Virgo is governed by Hermes (Mercury) God of Communication and all Arcane Arts. Ancients knew so much about gut feelings that they’ve included it in Astrology. Your guts, are governed by Virgo and Virgo is governed by Mercury. So there you have it. The answers you seek are already in you. And I mean that literally.

Gut Feelings your should NEVER Ignore

1. Gut Discomfort when you enter a Room / meet a person

I’ve been there so many many times. This is a very important gut feeling you should NEVER ignore. But why? Let me give you some examples from my personal experience.

I was really young when a friend of mine invited me in her house for her birthday. When I’ve arrived there, I was feeling something really weird. A sense of discomfort. It did not go very well. I was feeling something strange all night. Many years later I’ve learned the truth of that house and the dark arts that were practice there. Conclusion: Gut feeling was warning me about this dark energy!

The same gut feeling (mixed with excitement – you will read later) was present when I met a very powerful man but also a close friend of mine. I still remember trying to figure out why I was feeling this way. Later, I discovered that there was a very strange synastry going on there. This turned to be one of my closest friends ever but also one of the most difficult people I have ever come across. Conclusion: Gut feeling was warning me of the difficulties which I would face – and there were plenty! But due to my estimation this showed an imbalance of our aura’s energies. One should learn to  accept and forgive the other.

2. Gut Excitement for something

Have you ever felt that intense need to go for something – a goal or any opportunity? Even if it makes no sense you may feel that this chance is made for you and is also presented for you! There also two possible scenarios for this intense gut feelings. What you need to understand here is that this energy you perceive has indeed a reason!

In this case this gut feeling is presented for you to understand and of course embrace this opportunity. It’s a very subtle difference for a golden opportunity and a trap though. But we’ll get to that.

In this case, the excitement is about the experience itself. There is lesson there which is very important for you and your spiritual awakening. Hence, it might not go that well, but it’s somehow essential for you to make this ‘mistake’.

Have you ever felt that you’ve lived something again? Well, there are many interpretations for this phenomenon. However, Witches know that these moments are actually memory fragments from before your birth of this life-time.

The Deja Vu feeling can alert you that something or someone from your past life is here again – probably with the same purpose as before. Deja vu is so intense not for fun – but because you are warned not to make the same mistake again!

We live, we die and we are born again. But there are some breaks between our lifespans. At this point we are in pure spirit form, scheduling our next incarnation. Therefore, our Spirit puts some anchors – so that we achieve some awareness for very important steps in our evolution. Hence, Deja Vu can be a memory – an anchor – that you’ve intentionally put before your birth. When you feel this deja-vu, step behind – close your eyes and meditate. What is my spirit trying to say to me?

Ever had this experiences yourself? Let us know in Forum!