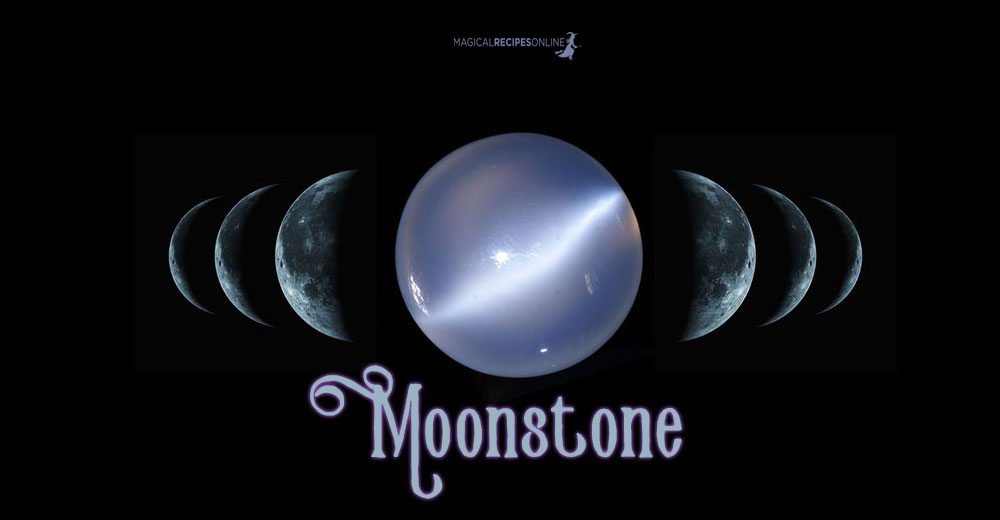 Moonstone was a stone that for many ancient cultures carried within it the shine and the glory of the Moon. A story says that Ancient Romans believed that moonstones were actually moonrays that have been solidified and captured within them the very essence of the Moon.

The stone is considered sacred in India as well, where it is named as the Chandra Kanta (the light of Chandra) and associated with the God Chandra. The Chandra Kanta is a powerful occult stone and it is said that will bring good fortune to its bearer and will enable him/her to see the future. Other names for the moonstone are: Water Opal, Fish-Eye and Wolf’s-eye that show how close the stone was considered to be to the element of water, the Night, the Moon and nocturnal creatures.

The stone was used in magical rituals for love, divination, prophecy and empowerment. It is said that the stone will bring its bearer wisdom as s/he will be able to see the light in the darkness. It is considered to be the birth stone of Cancers (that means that the magical properties of the stone is magnified for Cancers) –click here to find your Birthstone – in the western astrology and it is highly associated with the element of Water. This may be due to the fact that the moonstone owes its shimmering shining effect to adularessence which is usually caused by built up water in the mineral. In addition, moonstone is regarded as a stone that will help you develop further your psychic abilities as it is strongly related to the third-eye chakra.

Finally, the moonstone was considered to be a very potent amulet of protection for sailors and in general for those who travel over the sea. In addition, the stone will guard its bearer against dangers that lurk at night and it is a stone that is worthy to have with you if you are travelling during the night.

“I call upon you Lady of Night

Bless this water with your light

As you shine so I shine Glory and beauty now is mine.”

Before the Sun rises take the bowl and either drink the water or pour it over your naked body. May you shine as She shines :-)