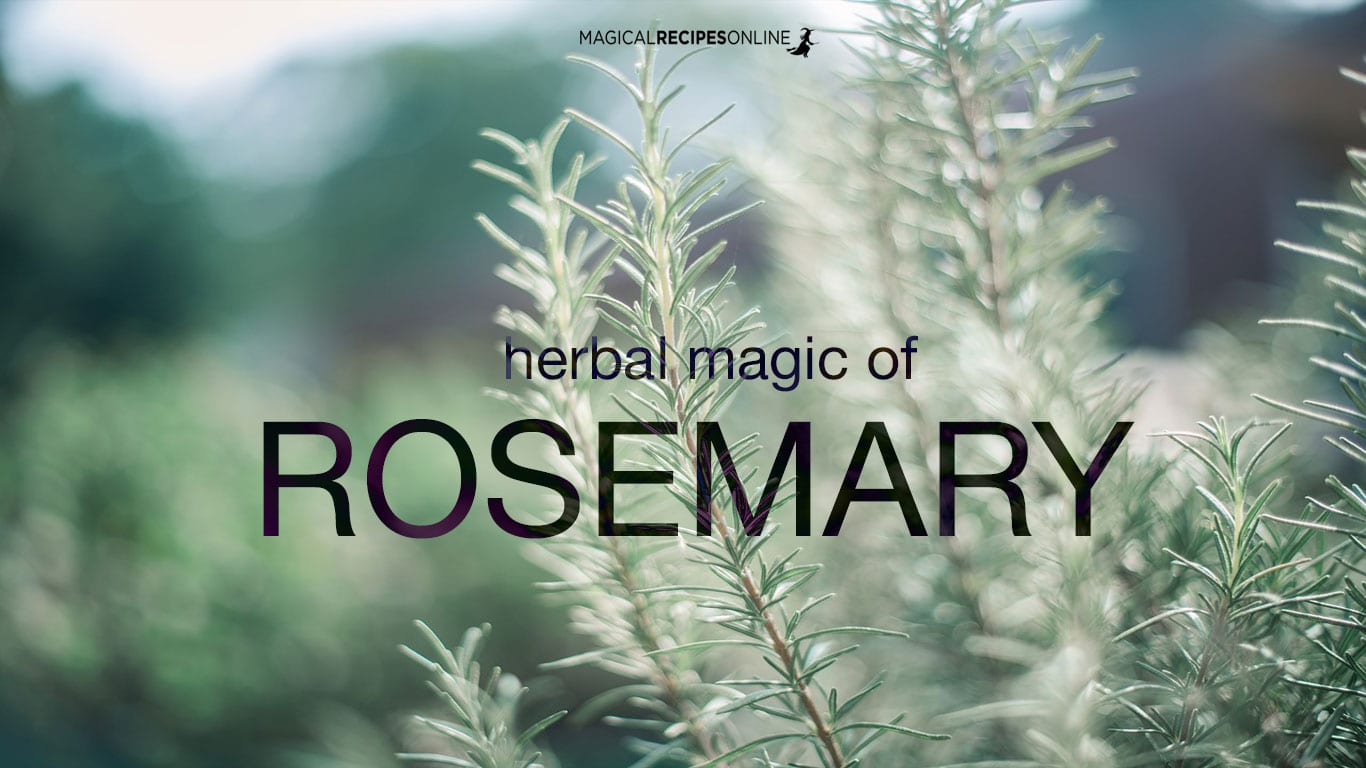 Rosemary (Rosmarinus officinalis) is a fragrant woody evergreen herb which traditionally grows in the Mediterranean region. Rosemary is a Latin name which in fact means the Dew of the Sea.

the Herbal Magic of Rosemary

In Greek the name is ἀπόσπληνος or ανθός or δενδρολίβανο which in fact means the Flower and the Tree’s Frankincense. Rosemary has a special place in the Ancient Greek religion, used widely to sanctify and decorate altars, temples and sacred grove.

According to a legend the first Rosemary grew around the newborn Aphrodite when Uranus semen fertilized the Gaia’s ground.  In later years the actual Latin roots of the name of Rosemary was forgotten and became the Rose of Mary, the Rose of Virgin Mary. According to a Christian legend, Virgin Mary, while wearing a blue dress, touched a bush of white-flowered Rosemary and the flowers were instantly turned Blue.

Rosemary has been used extensively in magic spells and formulas since ancient years and it has been famous for its cleansing and protective qualities. It still remains one of the oldest incenses along with Myrrh and Frankincense and is burned in Cleansing and Spell Breaking rituals (click here for more Spells and Rituals).

The Magical Properties of Rosemary

The herb has the amazing quality to cleanse and rejuvenate the mind and the aura of the afflicted person and it can help significantly in home cleansing and purification rituals. In addition, along with myrrh and frankincense it can be burned as a preparation for any major magical Ritual or Ceremony.

Apart from its cleaning and purifying qualities, rosemary has been used to provide mental clarity, focus and good memory. In old tales, even the smell of the herb was able to enhance memory and help the wearer get rid of mental disturbances that obscure the mind.

Along with its protective and purifying qualities, rosemary can help a victim of malevolent magic to gain clarity and focus upon their purification ritual. Therefore, rosemary is a valuable tool in times of crisis where the witch/mage/magician cannot think clearly.

Rosemary was also used in order to protect newly married couples and to ensure that their marriage will be happy and long-lasting. An old tradition mentioned that a rosemary branch should be dipped in the newly wed couple’s first drink. Then, the couple from a single glass must take a sip in order for their love to remain true and endure any difficulties. Another explanation could be that rosemary would help the couple to remember the happiness they shared during their wedding day, making it a vibrant happy memory; a point in time that acts as a shield when more challenging times are due to come.

Finally, rosemary was burnt and planted in graveyards, in order to ease the departed, as the rosemary signified that they will always be remembered by their family members and loved ones.

Burn few leaves of Rosemary on a charcoal before every spell. Smell the smoke of the incense for few seconds . Relax and receive the purifying powers of Rosemary. This will also help you with a nightmare-free sleep. The vibrations of Rosemary will help you having pleasant dreams.

Rosemary’s magical properties and powers include the Elf Summoning abilities. It is said that he or she who grows quantities of Rosemary is highly likely to attract Elves in their territory.

To summon them burn equal parts of dried Rosemary and Hollyhock outdoors. Remember to take Fire Safety always under consideration.

To establish contact between Humans and Fairies or Elves can be a tricky, difficult and sometimes dangerous endeavor. Read the Article of Contacting the Faeries. We encourage you to cast a magic Circle fist for protection before contacting anyone. Read more about the Magic Circle here.

• For Protection and Purification

• For Exorcism and Black Arts Defence

• For good memory and mental clarity

• To ease the departed

• To ensure a happy marriage

• To Summon the Elves and the Fairies