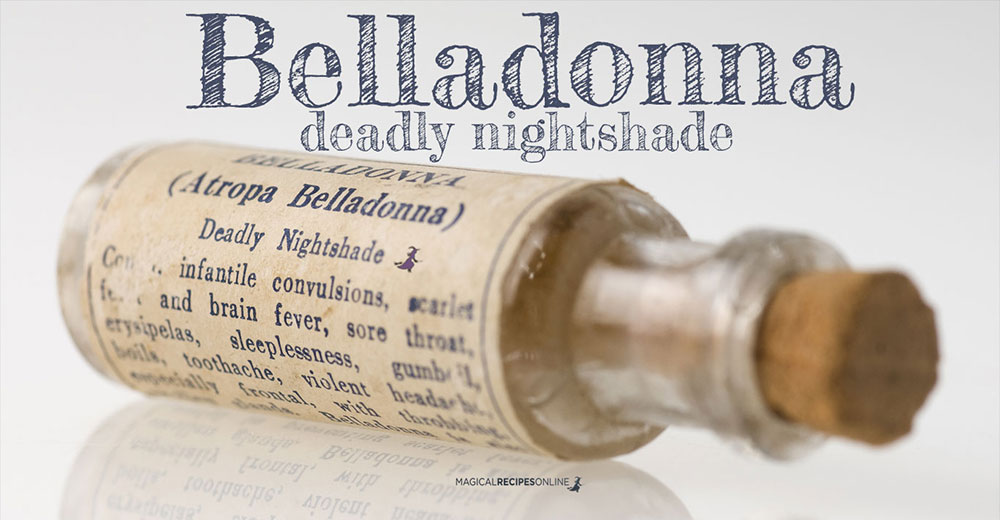 Belladonna (atropa belladonna), alternatively known as Deadly Nightshade, belongs to the class of the plants that have been very famous in the witchcraft lore, however, I would prefer to give a warning in advance.

Belladonna is very toxic and all the parts of the plant should not be taken internally as they contain two strong toxins, scopolamine and hyoscyamine that even in small quantities can bring hallucinations, delirium and death. So be extra careful while dealing with this beautiful yet deadly herb.

In order to demonstrate its qualities we shall begin with the analysis of its name. Belladonna in Italian means “Beautiful Lady” and as you may have already guessed, this plant bears the name of the third Fate of the Greek mythology. Atropos was the Fate that was cutting the thread of life and therefore Belladonna was under her jurisdiction. There are two different stories where potentially the name Belladonna comes from.

The first story can be tracked in myths and legends that surround the plant. It was said that in the forests where the plant was grown, passengers could see a beautiful lady with long black shining hair and big dark eyes appear when the moon grew smaller and dark in its waning phase. Some stories say that the woman would seduce the male passengers only to be found dead next morning, others state that they would wake up constantly thinking about her until they became completely mad, and finally there are some stories where practicioners would pay tributes to the plant for the dark lady to appear and teach them the mysteries of magic. A closer look to these stories will help you understand that the plant is associated with death, hallucinations, beauty, seduction and magic. In addition, the Goddess that appears to be associated with the plant is Hecate and all the above characteristics give a good, however partial, description of the Goddess.

Now I know that many of you are already familiar with belladonna and you wish to learn more about its use in the “Flying ointment” recipe. For those who are not familiar with the term, the Witches Flying Ointment was a famous salve with hallucinogenic properties that could aid the witch enter quickly in an altered, heightened state of consciousness and aided her to astrally project. Please be aware that if you have not been trained/ learnt to astrally project in simpler ways, the flying ointment would not be able to help you much and will put your life in danger. The ointment was used by more experienced witches in times of need in order to accelerate the process. If you would like to learn astral projection, it needs patience and dedication and there are no quick fixes for that.

I will not claim that it has not been one of the traditional ingredients of the recipe, nor I will claim that it is not potent. But the risk involved is considerably too high in order to outweight the potential benefits it may bring. However, I will give a small tip to those that they feel they want to learn a bit more. The part of the plant that was used as an ingredient for the Flying Ointment recipe was the part of the plant that was less toxic. That does not mean that it was not toxic enough to bring death, but it was not as toxic as the other parts of the plant… and this is Belladonna’s leaves. Unfortunately, as I know that many of you will be tempted to create and use a Flying Ointment I will not proceed in revealing the recipe. This may happen at a later stage and only if good justification is provided.

In magic, belladonna has been used in different ways. It is said that a powder was formed from the plant and with the proper spells and manufacture could create an aura of seduction. In addition, the root of the plant was used by women to attract male companions. An old recipe says that if you have the root of the plant, you can magically enchant it with a spell to the Goddess, then if attached to the lower part of the dress the witch would make men run like crazy for her. Finally, belladonna was used by witches to dilate the pupils of their eyes in order to appear more seductive. An old recipe mentions that once used in the eyes, the witch can seduce the man she casts her “gaze” on.

Obviously, there is further discussion surrounding the plant which I will reveal to you soon in the second part of Belladonna.

>
PREVIOUSAnubis, the Gatekeeper of the Great Beyond
NEXTHow to Cleanse and Revive your Gems and Crystals