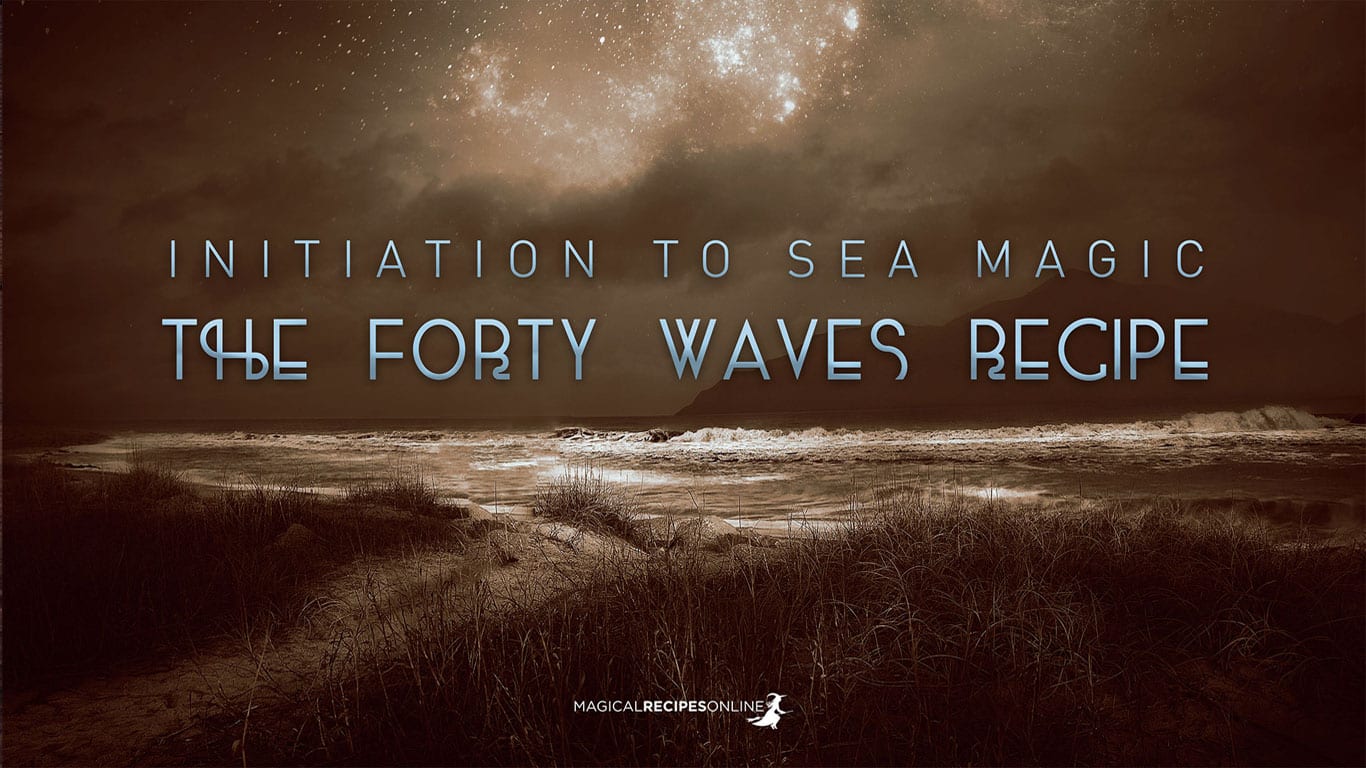 Nature all around us is overwhelmed with magic powers. And the one natural source holding and providing, maybe, the most concentrated mystical and magical power is the Sea. It is no wonder that all civilizations that grown around the sea worshipped it as divine and used its magical powers. The procedure we are going to describe here is called The Forty Waves. It comes from the Mediterranean See. Similar, or almost identical procedures, though, are used in other places around the world, to utilise the magical power of the sea.

The Power of the Sea

Waves in general are channelling energy. Therefore sea waves can bring the magical energy of the sea to the shore. In the same way, they can take energy from the shore into the depths of the sea. The procedure of the Forty Waves uses both these capabilities. It uses the returning waves to send unwanted energies in the sea, and the coming waves to bring the blessings from the sea.

It is a common knowledge that the purifying powers of the sea are incomparable. Therefore, there is no need to worry about the negative energy that is sent in to the sea. It will be purified easily. On the other hand the sea does not have unlimited power to fight pollution, so please respect this great natural and magical source and keep it clean.

Although the spell may be done for either purposes of removing jinxes, bad luck or other negativities and problems, or to bring good luck, and other blessings, during the procedure we actually do both. When the waves return back to the sea, we release ourselves from the problems holding us back. Then, when the waves come, we receive the wanted blessings. This is a whole therapy.

How to collect The Forty Waves?

Let us see how we perform this spell, or simple ritual. You will only need a small glass bottle to collect the forty waves and forty stones to symbolize the problems and use them to send them away. Optionally you may burn some rock sugar while performing the ritual.

Choose a day with a clean sky. We mostly prefer performing the Forty Waves early in the morning on sunny days, under the colourful sky of the rising Sun, if possible, but the setting Sun, as well as the moonlight work quite nicely most of the times.

So, if you have a yard, collect forty stones from your yard. They don’t need to be big ones. Actually prefer some small ones. If you don’t have a yard, then collect the stones from the coast.

Light the rock sugar as incense, if you are using it and then stand in the sea, having the bottle in one of your hands and the stones somewhere you can easily reach. Give yourself some time to get tuned with the rhythm of the waves. Then start during a returning wave.

Reach for the Waves

As the wave returns in the sea, throw a stone saying:

“As the waves scatter, so should every evil, misfortune and jinx scatter.”

Then when the next wave comes towards you, submerge the bottle collecting some water while saying:

“As every wave comes, so should every blessing and every joy come. ”

Repeat the procedure until you have thrown all forty stones and collected all forty waves.

Then thank the sea, seal the bottle and leave. Do haste on that. And also keep silence until you are back home or at least until you are far away from the sea.

There are indeed some banishing and cleansing rituals that may be performed at the seashore just after collecting the forty waves, using them, but if you don’t know them choose to leave at once.

That is the whole procedure.

If you want to empower the collected forty waves you may sanctify them before using them, but they are pretty powerful as they are. Use them to ritually cleanse yourself, your house, shop, ritual tools or other objects and bless all these with the blessings you have asked for. Keep in mind that sea water is salt water, which means it may leave stains as well as cause iron based objects to rust if left on them for a while, so use their enormous power wisely. Also, do not drink the forty waves. It is considered improper use, and this is not just because drinking sea water may not be the best for your health.

Finally, as mentioned earlier, use a small bottle. Collecting too much is not considered respectful. Collect 250ml to 500ml, or even less if you need less. If you need more in the future, be confident that the sea will still be there ready to provide you with everything you need.

So, that’s all. Have fun and always be blessed!

PREVIOUSElemental Magic: A spell for each Element from Grandmother’s Grimoire
NEXTA Wish Spell with Fire and Bay Laurel.