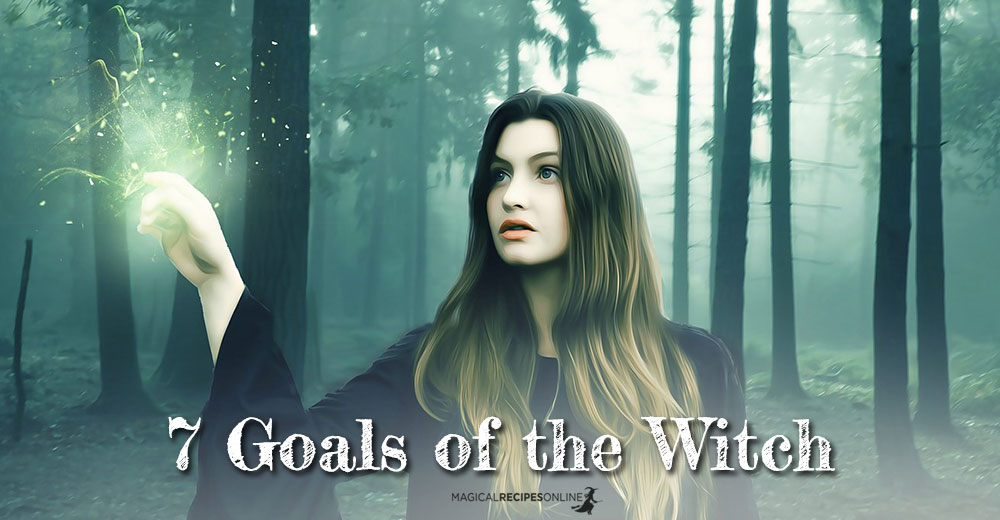 A Witch is a powerful force of Nature. A Witch is an Awakened Soul, a force to be reckoned with. A Witch has many Gifts but also has responsibilities and goals. In this article we will try to define the Goals of Witches, in order to promote balance and acquire more wisdom as the years go by. After all, a Witch is like a sacred Tree. It has the power to keep on growing.

The 7 Goals of Witches

A Witch knows the power he/she possesses and whilst he/she can always declare it proudly, conceit is a deadly poison. It is wise for a Witch to act in silence and humility. One who has the Power understands that this Power is his/hers & Divine at the same time. It is a gift. Every human can have this (or similar) Power if he/she is devoted and focused enough. Old Witches kept their business secret for many reasons.

To keep a secret was always considered a “golden” advantage. Secrecy is a shield against the ones who fear the Witch, while at the same time allows your own fears or doubts interfere with your spellcasting results. Simply after you cast a spell, write it down in your journal or Book of Shadows and forget about it. If you need to come back to it, then it is certain that there will be an opportunity in the future.

A Witch is one how knows and takes nothing for granted. A Witch understands that everything happens for a reason and so if there is a reason which can cause unbalance to body & mind should always be avoided whether this reason is physical or of any other nature. Keeping a balance between Body, Mind and Spirit makes us powerful individuals who listen to their needs, embrace them and understand them.

A Witch respects his/her body and – eventually – stops any habit which can ultimately destroy his/her health. A Witch is disciplined. A Witch knows the powers of the Healers which are right now incarnated as medical Doctors, psychologists, health professionals or spiritual guides, at the same time the Witch knows to listed to her Body, Mind and Soul and ask for help when necessary.

To know the ways of the Craft is to perceive that modern Medicine is an evolved Path of Healing, regardless if he/she practices any other spell or rituals to promote health. A Witch knows that the sacred & secret energy which flows in our body can be directed in a better way with a more balanced diet, as Chi – the vital energy – hides in our food. Eating healthy meals can provide your body, mind and aura with more energy.

3. Monitor and Organise your Words and Thoughts

The same rule applies for both, we feed with our energy both what we desire and fear at the same time. A Witch should master discipline and monitor these thoughts. The same applies to the Words a Witch uses. It is not a secret that besides visualisation a Witch chants. A Witch knows of the power the Oral Speech possesses, as it’s the power of the Element of Air. A Witch “creates as he/she speaks”.

If a Witch is unable to control the Words and Thoughts, he/she should always ask for help, whether this help comes from a psychologist/psychiatrist or he/she also employs other ways like Hypnotism and/or Meditation is up to him/her.

4. Attune with the Circle of the Earth

It is said that any human can posses the powers of a Witch (see here more of the powers of the Witch) if he/she participates persistently in every major “Sabbat” of the Year (Spring Equinox, Beltane, Summer Solstice etc). Participating in these festivals helps a Witch attune with the powers of Nature and the cycles of the Seasons. Every year, Mother Nature, the Great Goddess, dies and is reborn again as Persephone travels annually back and forth from the Underworld to our World. (Read more about Persephone and the Underworld here).

A Witch knows that these “Sabbats” grants power over Life & Death, the greatest mysteries. A Witch feels the power of Nature and cares about the planet. A Witch is and feels responsible for Nature’s future and does everything possible to give love and affection to Mother Nature. It is as simple as staring to recycle now or keep your own place or another public space near you clean. Remember that a Witch serves the Earth and learns from it.

A Witch studies more and more everyday as he/she knows that Wisdom is endless and there is always room for growth, although to know where to stop and take a break is also part of the Plan.

A Witch can (and should) party for everything he/she has. Celebrating is part of a noble & essential act of being grateful. (See more about the magic which lies in being Grateful).  “Expressing our gratitude to Spirit and our Spirit friends for everything we receive is not only an act of courtesy but an essential part of our evolutionary process. By learning to be grateful to the Divine, to our selves and to others we start to appreciate our lives and the experiences we receive. Through this recognition we form a bond of love while we start to enjoy everything at a profound level which contributes significantly to our happiness and our personal development.” Read more here.

There are many paths of Wisdom. A Witch knows that throughout history, Humans tried to define ways to describe and honour Gods & Goddesses through organised religion, spirituality and solitary ways. A Witch understands that during all these millennia, what actually humans were trying is to find  simply their Divine seed which lies in every Soul, the own personal truth that we hold that is part of the Collective Soul, a vibrant and living organism that encompasses everything and is everything.

Although a Witch acknowledges that there are malevolent religious paths and practices, respects and accepts all Religions but he/she can always disagree with practices and beliefs that are not in accord with the Greater Good. To disagree and to have an opinion is essential for our evolution, to try to convince others or force your own opinion is unnecessary. There is a time and place for everything.

PREVIOUSMagic Potion to shine like the Moon
NEXTCommon dreams, What do they mean & Astral Projection