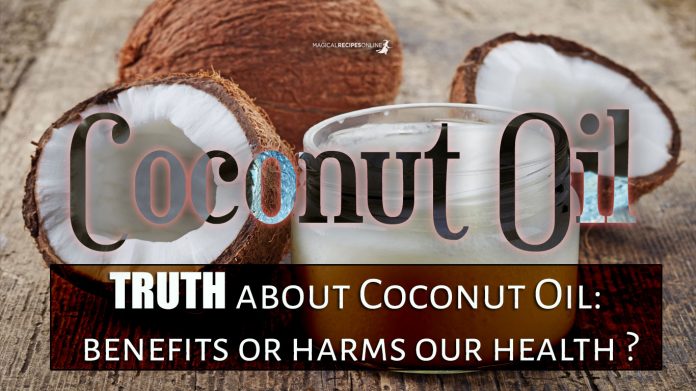 I bet that you’ve heard hundreds of reports in New Age and Natural Food sites that Coconut oil Superfood’s are miraculous. According to these sites, Coconut Oil Superfood can be used in almost every disease, preventing or even healing disturbing situations like:

Well no, at least not to the medical society. According to a recent scientific report, the British Nutrition Foundation said.

“There is no strong scientific evidence to support health benefits from eating coconut oil.”

But what is happening with the Coconut Oil ?

How Coconut Oil is produced:

“Coconut oil Superfood” is made by pressing the white part of coconut. But what is it? Coconut oil consists of about 84% saturated fat. Let’s compare it with other oil to see how large this percentage is. 14% of olive oil’s calories come from saturated fat and… 63% of butter is saturated fat! That’s pretty big percentage for Coconut oil my dear!

Why do we care about saturated fat?

Just let me tell you that the American Heart Association says to limit saturated fat to no more than 13 grams a day. That’s the amount in just about 1 tablespoon of coconut oil. This is all the saturated fat you should take in all day. No more. If you take that tablespoon of coconut oil… that’s it! Click here to read the full report of AHA (american heart association)

Pro-coconut oil sites claim – and this is true at some point – that  coconut oil has higher concentrations of medium-chain triglycerides (MCTs). MTC is a type of fat molecule that has shorter chains of fatty acid than most. Dr Marie-Pierre St-Onge, associate professor of nutritional medicine at Cornell University Medical School found that eating more MCTs instead of LCTs can help you lose weight.

Ok, Coconut oil has indeed larger percentage of MCTs but then again it’s only 13-15%. The rest is just LCTs – traditional – saturated fat.

What about the other claims? For instance preventing Alzheimer’s disease. We could not find evidence supported from the Alzheimer’s society. Further research should be made one would argue. Well, apparently yes.

Coconut oil is also believed to be a great source of antioxidants. Antioxidants are true to help in prevention of DNA damage, cancer and skin slow skin aging. Although this is true, it’s not even close as good as fruits and raw vegetables.

What about the antimicrobial and antibacterial properties of the Coconut oil? It does contain Lauric acid, a type of fat molecule found also in breast milk which has anti-inflammatory and antibacterial properties. Although yes, it is relatively rich in it, this acid can act like antibiotic only in very concentrated solutions. So no, unfortunately due to the researches it doesn’t act as an antibiotic.

Ok. Enough with the Medical society. Is it any good in Magic?

Oh yes it is. Coconut oil has very interesting magical properties.Voodoo and Santeria traditionally use it in their spells and rituals . Nowadays, modern witches and mages use it to channel the forces of the Moon and Lunar entities. It has very interesting effect on fertility magic too. Let’s take a look the Coconut’s powers.

The bottom line is that labelling products as “superfoods” or “treasures of nature” can trick people into thinking they are consuming something which is good for their health when it is not. Although further research should be done. Until now no evidence supports these so called health benefits.

This of course does not mean we cannot use it. For starters, it tastes really good. Love this exotic feeling. Moreover it has so rich magical properties which makes it irreplaceable tool in my rituals. Love the smell of coconut in my spells and when you use it you will agree with me.

Witches and Mages of the 21st century should not be fooled easily. Yes, we practice magic following the Olde Ways. But no, we do not get fooled by buying “superfoods” which are actually not that super at all. We are smart followers of the Powers of Nature.

5 Secrets of the Infinity Symbol ∞