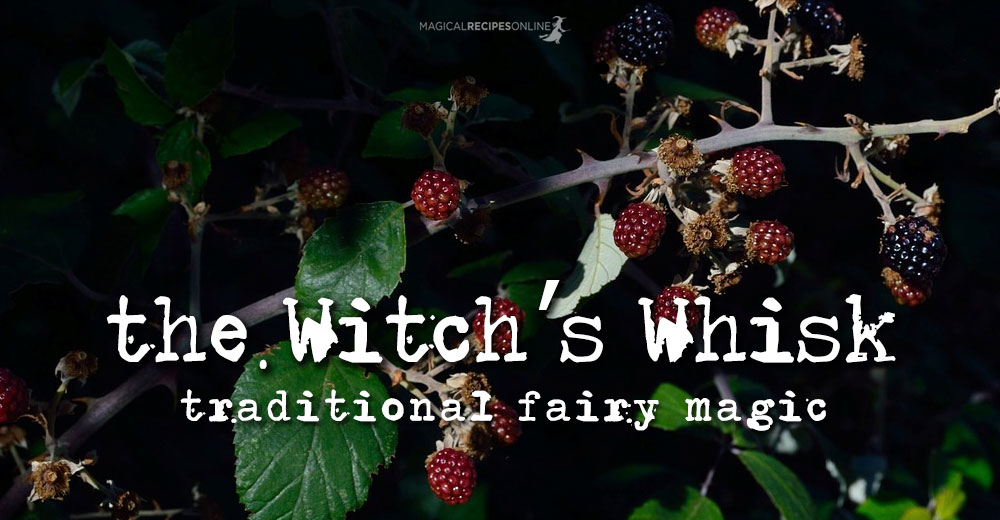 The Witch’s Whisk is a powerful charm of the Old Witches used for cleansing and banishing purposes. Although simple, this charm has long been credited as a magical tool drenched in fairy magic. Why? Because it is made of Blackberry twigs. Blackberry is a fairy plant.

When to Make a Witch’s Whisk

During Waning Moon (see here why) a witch would search for a Blackberry bush/tree. Waning phase of the Moon is considered to be very potent for banishing, cleansing and protective purposes.

Traditionally blackberries or parts of the tree should not be gathered after Old Michaelmas Day (11 October) as the devil (or a Púca) has made them unfit to eat by stepping, spitting or fouling on them.

How to pick the twigs – Respect the Fairies

The s/he should make an offering to the tree spirit asking permission to cut some twigs. Remember, blackberry is considered to be plants of the fairies thus any interaction or hint while approaching a tree should be taken into consideration. For example, if you feel a bad vibe while trying to cut a twig look for another tree. The Fairy spirit has just given you a very important vibe. You may notice some unusual fairy activity during this process. Be aware.

The Witch’s Whisk is now Ready!

How to use the Witch’s Whisk

The smoke of the Witch’s Whisk was used to:

A chanting which is traditionally associated with Blackberries is the following. Chant it three times, knowing that you frankly invoke the powers of Brigid, goddess of Fire, Healing and Protection. The same chanting is used for healing purposes.

“Three ladies came from the East, One with fire and two with frost, Out with thee fire and in with thee frost.”