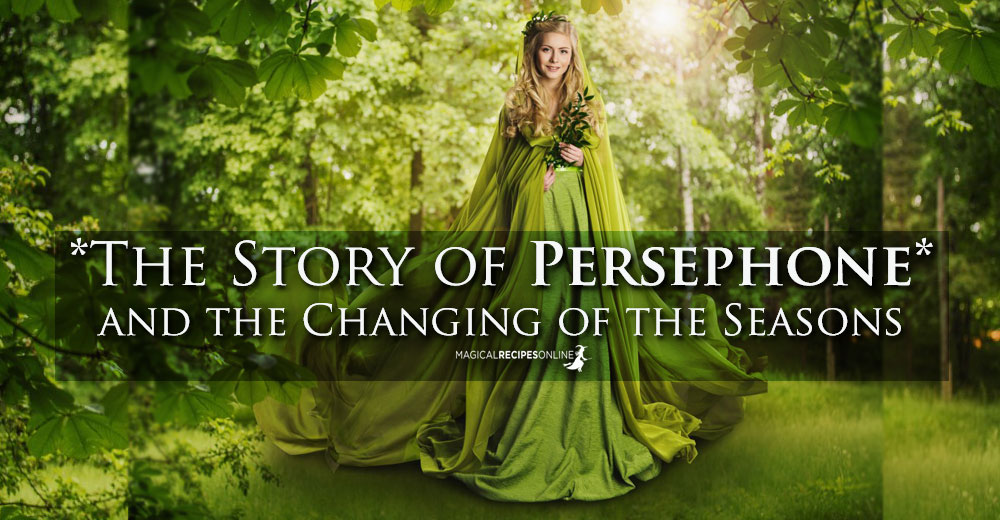 * The Story of Persephone and the Changing of the Seasons. *

After hearing her laugh, Hades, the feared god of the underworld fell in love with the beautiful daughter of Demeter, goddess of the harvest. Persephone.

One day Hades watched Persephone play with Cerberus and decided that she must be his for all time, so he stole her from the world, taking her to the underworld. Persephone was locked away in an ornately decorated room, no matter the beauty she was distraught at being taken away from her mother. Hades brought her all kinds of food, but she refused to eat it. She’d heard long time before that should you eat anything from the realm of Hades, you could never leave, and she had every intention of leaving that place. As soon as she could figure out how that is.

Suffering from desperate hunger, a week after being taken into Hades, she ate six pomegranate seeds. She immediately burst into tears, realising what she had done.

Far from Hades, Persephone was not the only that was crying, her mother Demeter was distraught at the loss of her daughter. She missed her terribly, she didn’t care if the crops died, and the harvests never came, all she wanted was her daughter back. She was only focused on finding Persephone, the world could end for all she cared. Zeus found out, and made it clear that this couldn’t continue, so he sent his son, Hermes, to see if he could make a deal with Hades. 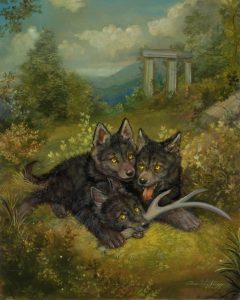 Kerberos (Cerberus) the three headed dog of God Hades, protector of the Underworld. A wonderful piece of art by Annie Stegg. Visit her amazing gallery here

Hermes managed to work out a deal that everyone could live with. She would marry Hades and live in the Underworld for 6 months of the year, one month for each of the seeds she had eaten. The other 6 months she could rejoin her mother Demeter on the surface.

Hermes managed to work out a deal that everyone could live with. She would marry Hades and live in the Underworld for 6 months of the year, one month for each of the seeds she had eaten. The other 6 months she could re-join her mother Demeter on the surface. While she is with Hades nothing grows, the natural world sleeps in Demeter’s upset. This is Winter. In the Spring Demeter makes sure all the flowers are blooming and the crops are growing in preparations for Persephone’s return at the Spring Equinox. They enjoy the Summer months until Persephone must once again return to Hades. A never ending cycle of happiness and sorrow.

Come with us to travel you to the Palace of Hades in the Underworld. Where Persephone is the Queen. Real Ancient Necromancy.