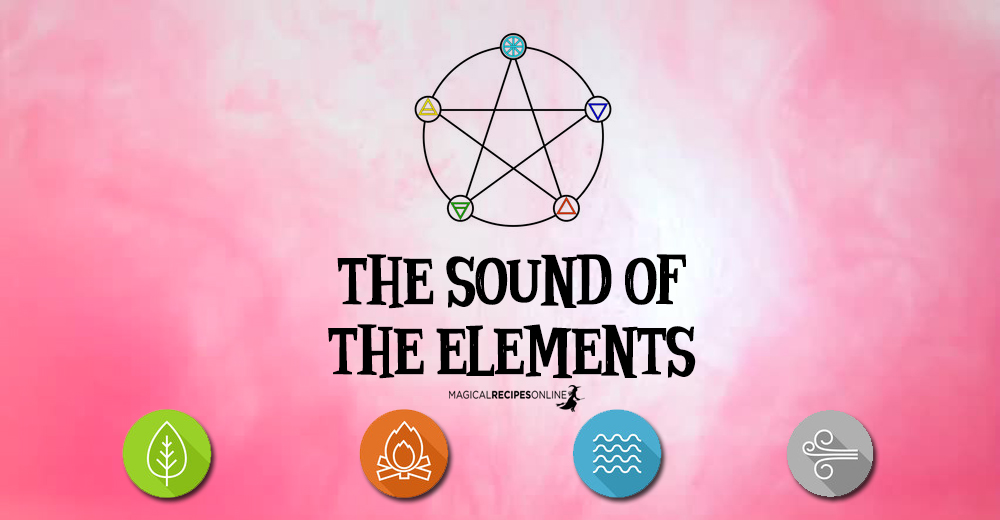 In magic there are five elements. Spirit, Air, Fire, Water and Earth. Feng Shui gives us a different set of five elements, and even those in common, don’t always share the same properties, but this article won’t refer to these ones. Each Element has its manifestations, and its spiritual form – the real power and energy of it. Sound is a vibration. A form of energy. By using an appropriate sound we can attune ourselves with the energy of an element.

So, here we are going to see some sounds that can help us attune ourselves with each element, and “control” its qualities to a degree. Controlling the manifestations of the elements is more complicated, and we aren’t dealing with this in this article. A quality is a different thing than a manifestation. For example, speaking is a quality of air.

By these sounds we can also empower our elemental magic, and the tools of the craft. We can bless, for example candles and the Wand with the vibration of Fire. Things like that. But we can use these sounds for casting simplified spells, if you permit the expression.

The Sound of Spirit:

Most of us are familiar with the sound of Om. This is the vibration of the Spirit. According to Hinduism all creation was created by this sound, and this sound will also end the world. Everything is vibrated by the sound of Om. But, it is up to you whether you’ll agree with this or not.

By using this sound, we can empower our magical powers as well. We can do this just before our spell-casting, to have better results in our spell. If we want to have more permanent results, we should use the sound daily until we have reached the level of magical power we desire.

The Sound of Air:

The sounds of Air are Ham and Yam. In my personal opinion, Ham is more airy, while Yam has a more earthly feeling. It’s like the way air interacts with the material nature. Try each sound in different sessions and see how you feel about them. Then, decide which one helps you the most.

Air rules, amongst others, intellectuality, speech, hearing, the feeling of touch. It can help you to stop rumours, express your feelings and thoughts, have better results in job interviews, achieve better results in your studies and tests. Internet is ruled by Air, so advertisement through internet can also be supported by these sounds. And the promotion of your web-based business as well.

The Sound of Fire:

The sound of Fire is Ram. Ram is also the name of Lord Rama, and according to Hinduism, even the mere mention of his name can fill your life with all kinds of blessings. So, using Ram can benefit you in unpredictable ways as well.

Fire rules, and raises, passions and enjoyment. It gives energy, physical and spiritual. It can empower sensuality and sex drive. Also, Fire can promote the metabolism too. Enthusiasm, self-confidence and seductiveness are under Fire’s dominion. Blood is also considered as belonging to Fire, so Ram can help you with blood related problems.

Removing blocks, and burning away problems, evil spells, and evil spirits are also attitudes of Fire. Creating success, personal or not, too. In my opinion, Fire is the most flexible of the elements, as it rules creation and destruction.

Whatever we want to achieve, we can express it as a creation, a destruction, or a combination of them both. For example, wealth belongs to Earth. The enjoyment of it, though, belongs to Fire, but this is not what I’m commenting on right now. So, let’s say we want to become wealthier. We can destroy poverty, we can create riches, or we can do both. These are attitudes of Fire. Love is Water (passion is Fire). One seeking a new love, can destroy loneliness and create a joyful relationship. With such a way of thinking, everything can fall under the dominion of Fire.

Of course, an expert mage of an element can do everything by the use of this element alone. But Fire provides a simplicity to it, and it is a fast working element as well. Of course, respect Fire as much as, or more than, you would respect fire. Infuriating the element can be extremely disastrous.

The Sound of Water:

In ancient Greece there were four schools, each preaching which the original element is. In other words, which element creates the rest. Heraclitus’ school of Fire overwhelmed the rest, so in Western Magic, Fire is considered the original element, for those who care about ratings. In Hinduism, though, Water is the original element, and Waters gave birth to Fire, which then gave birth to everything else. That’s why in the Vedic Spells : How to gain more Wealth, Divine Protection & Guidance Lord Agni, the Fire, is summoned as “Offspring of the Waterflood”.

The sound of the Water is Vam. You can use this sound to heal or raise emotions. Freedom, flexibility and adaptability are also under the dominion of Water. Charm and bewitchment belong to Water as well. Astral travelling and the astral plane in general belong to Water, so the sound of Water can help you work with these. Reformation and illusions are also under its influence. Some will even say, that magic as a whole, is Water.

The Sound of Earth:

The sound of Earth is Lam. It can help us ground ourselves. Earth rules money and riches. It also buries what we need to end, and sprouts what we need to give life to. It heals the body and manifest the wishes.

As a funny experiment, if you have a garden or something alike, use the sound Lam there and see the results.

How to use the sounds:

I should say that the examples given to each element, are just examples. Each element rules many more aspects. Any aspect of your life, any desire you may have, is ruled by, at least, one element. Find out this ruling element, and choose the sound you need.

I should also make clear that these sounds, or mantras, have more aspects and uses than just the attunement with, and the control of, their elements. Also, there are other sounds and mantras which may be more useful for specific things and wishes. If you know one such mantra or sound, use that one. If you don’t know any, then use the sound of the element.

Finally, these sounds are just that. Sounds. Vibrations. They don’t have a specific meaning. They are neither names of the elements, nor names of deities. Their energies may be similar to those of a deity, and therefore, some may say that these sounds are representing the deity, but this is just a simplification. I mentioned something similar for Ram and Lord Rama, but Lord Rama is the Solar Maha Avatar of the Great Lord Vishnu, and the Sun belongs to Fire. In my opinion, Lord Rama’s name is delivered from the sound Ram, and not the other way around.

So, decide what you want to achieve, and mentally, or by speaking, declare it. Then, sit comfortably and start meditating on the sound of your choice. This, of course, includes chanting the sound. Don’t count the repetitions. Don’t think about how to chant it. Let yourself become one with the sound and trust the manta. Let it guide you.

When the energy of the sound calms down, leading you to the end of the meditation, once again trust it, and end the session. Repeat as needed, depending on what you have decided, how it feels, and what you want to achieve. As simple as that!

That’s all. Have fun and may all your wishes come true!