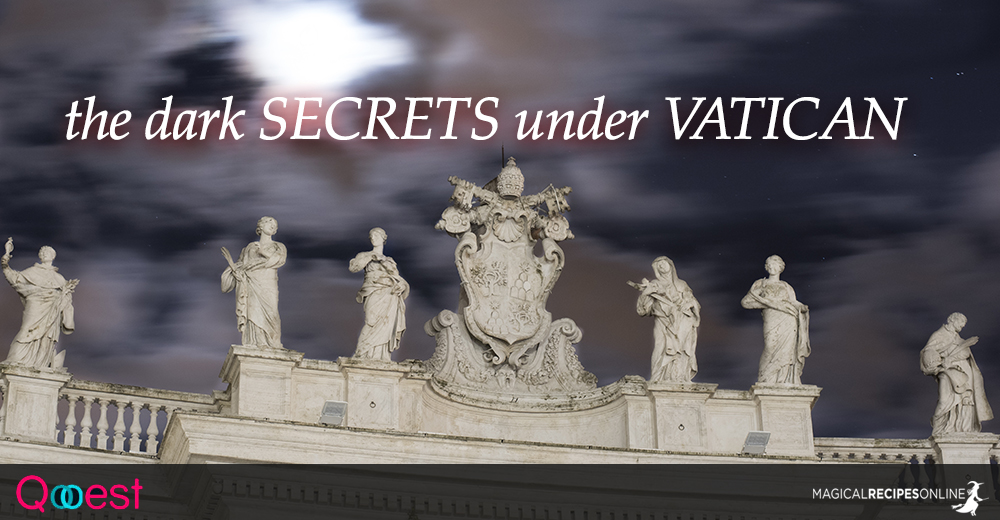 Once, there was one Great Library which was built to contain all the Wisdom of the World. This was the Library of Alexandria in Ancient Egypt. The Library was created by Ptolemy I Soter, a Macedonian general and successor of Alexander the Great, a visionary Greek King who except from being a conqueror was also a philosopher. It was believed to possessed all the Wisdom and Magic of the World. Probably NO other library has ever managed to acquire more of Alexandria’s Great Library than the Vatican Secret Archives – Archivum Secretum Apostolicum Vaticanum.

Alexandria’s Library was dedicated to the Muses, the nine Goddesses of all Magical Arts and Sciences. Unfortunately, after the demonization of the Old Religion, all these sacred Texts become illegal. Hence, Alexandria’s Library was sealed by the Christian Emperor, Theodosius I in 391 AD. At the same time, the ancient temples of Alexandria were also forbidden by Patriarch Theophilus.

According Socrates of Constantinople – an ancient historian – all pagan temples were destroyed, including the Serapeum which was part of the Great Library. 250 years after that, in 642 AD, Alexandria was captured by the Muslim army of ‘Amr ibn al-‘As. What was left from the Library was destroyed by those forces because “If those books are in agreement with the Quran, we have no need of them; and if these are opposed to the Quran, destroy them.”

What Happened to the Books of the Great Library?

Clearly most of the 400,000 ancient papyrus scrolls were set on fire, hence destroyed. However, it is believed that the Emperors, Popes, Patriarchs and conquerors – starting with Julius Caesar – managed to save the most important books by either stealing or copying them. There are 3 places of the World where is believed to have most of these ancient Books.

The Vatican Secret Archive is the private repository in the Vatican City for all of the acts promulgated by the ‘Holy See’, the Pope. The Library belong always to the Pope as Sovereign of the Vatican City.

What Does the Vatican Secret Archives have?

It seems that there is a misunderstanding about what is hidden in the Vatican Secret Archives. Although, officially the Library was opened in 1881 by Pope Leo XIII, hundreds of mystery novels could be written regarding the archives. Even so, now that the Library is officially open, there are strict limitations to what archive users are able to access and study.

According to official accounts, the Vatican Secret Archives is estimated to contain 85 kilometers -53 miles of shelving, which actually store almost 2 million books and 150 thousand manuscripts. Take a moment to think of it. To be an official researcher, special access should be granted by the ‘Holy See’.

And then, there are numerous of unofficial accounts about the underground vaults, in the Catacombs of the Vatican City. These Vaults are believed to occupy an even greater area, which can only access very few.

What is hidden in those Archives could change forever the history of Humanity. It seems that Researchers are granted access to the ‘non-dangerous’ part of the Archives. However, even in these sections, there are books which raise question, why the Church accumulated them.

For example, the “Red Dragon – Dragon Rouge” also known as the Gospel of Satan, a dangerous grimoire of Black Magic is in the Secret Archives. Discovered in Solomon’s tomb in Jerusalem and transferred to Vatican . It is believed that this Grimoire is written by he Devil himself, containing rituals to summon demons and make pacts with the dark forces. The very book is believed to be fireproof.

Why on Earth would Church want to possess a manuscript like this and keep it in the Archives, underneath one of the Holiest places and capital of Christianity? I repeat, this is no speculation. The Catholic Church claims official ownership of it.

It has been speculated by historians and occultists – who visited the secret library via astral projection , that much more dangerous secrets are hidden in the Catacombs of the Secret Library like:

What do you think is down there?

PREVIOUSPut God on Speed Dial – Instant Message from the Universe
NEXTLevitation that Works: “Light as Feather, Stiff as Board”