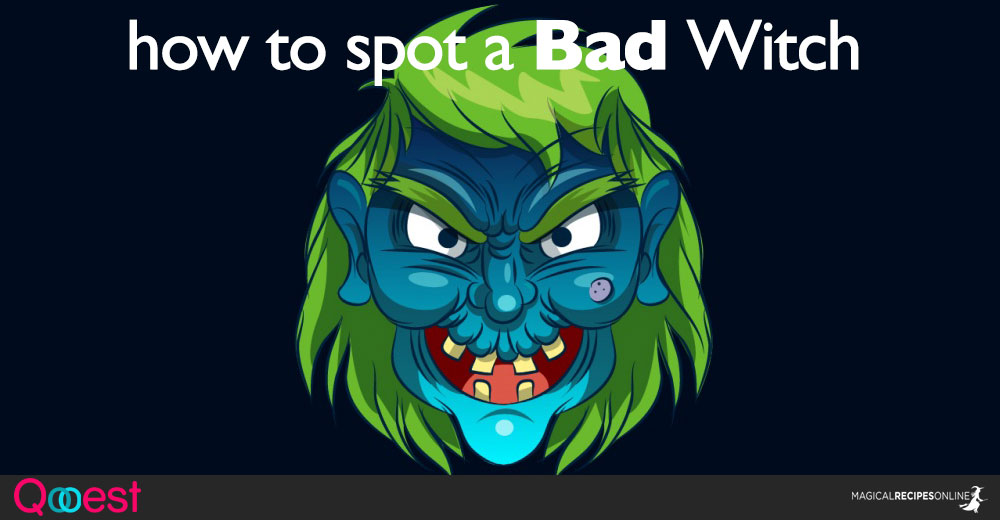 What is good magic, what is bad magic. Clearly, no sure answer can be provided in an article. However, talking about Good or Bad Witch, we have to make things a little more clear. One is certain. Bad Witches do not have scary faces and pointy long noises. Also, Talking about Bad Witches, we need to be most clear. Things may get messy…

Which Witch is Which?

Many tried to define a bad witch as the one who practices the dark arts. Hence, we should first try to clarify what “Black Magic” is, avoiding all these controversies.

However, according to our point of view, “Black Magic” is:

Trying to make things even clearer why don’t we start with an example. Let’s say that we want to help someone who faces financial issues.
To avoid Black Magic we should:

1. first make sure s/he agrees with receiving help from us,
2. never use dark forces to help.

However, spotting a Bad Witch might be more complex than that. As you can understand we have all been a little ‘gray’… in the past. These are the lessons we almost always learn the hard way. Being grey is not ok. It’s common but not ok. We should always stay on the Lighter part of the Karmic Wheel.

Traits of a Bad Witch:

Casting a spell to someone without his/her permission may mess things so much that we would cry our eyes out when we see the results. There is not innocent black magic spells. It’s always a heavy price to pay when you mess with Dark Arts.

When we cast spells without the targets permission we actually ‘play god’. We think we know what’s good for the others while we clearly don’t know even the most basic spiritual laws. Sometimes, disasters happen for a reason. And this reason might be the awakening of a certain person. Moreover, everything that happens to us, is somehow invoked by our intentions. Trying to by-pass Free Will is never cost-free.

We would never ask from a thief to help us open our home’s locked door. Right guys? Likewise, we do not ask from a demon to help us, even if our intentions are good.  This should always be avoided at ANY cost. Remember, the road to hell is paved with good intentions.

Demons will try to trick us and manipulate us in unimaginable ways. Summon Angels or other benevolent forces.

3. Shows off too much

The Purpose of Magic is clearly not to show off how powerful sorcerers we are. Although we might – rarely – do it, we should not focus our energy in our vanity as Witches and Mages. ‘Trying to make someone believe’ is interfering with Free Will.

4. Takes advantage of the Weak and Innocent

Magic is power. Clearly this power can manipulate or force someone do something. Witchcraft however should not used against humans. Witches command the powers of nature, not people.

The Authority given by the Craft should be used to protect the innocent and not use or abuse them. They may be ‘sinners’ due to your personal religious believes but this is not something you should change with magic. Make the change in the Spirit Plane.

5. A Bad Witch is Ignorant

A Bad Witch never says thank you the very forces that bestowed his/her powers. The higher forces do not demand from us to be praised. However, gratitude opens the door of heavens – see link. Gratitude is a divine gift, a tool for the Good Witch. Learn to say thank you to everyone or everything that has ever helped you. This causes a positive karmic feedback. On the contrary, ignorance causes a negative karmic feedback, pushing us in darker places.

We’ve all met someone like this. A narcissist type who believes that everything is related to him/her as s/he is special in many ways. When a Witch believes in his/her magical superiority, things can easily get out of hands. This person will try to manipulate others to justify and amplify black spells.

This type of Bad Witch is the one who can even assemble a dark Coven, causing terrible spiritual mistakes in the Astral Realm. It may start in a more innocent way, serving a good (?) cause, but it always gets worse!

Take the Nazis for example. They believed that they were doing something good so they convinced many people to join their dark covens.  They all joined their magical forces together, to annihilate innocent people by sacrificing them to the dark spirits.

A Bad Witch is eventually engaged in more hexes, bindings and curses that blessings and protection spells. The dark forces which influence these witches push them to make more and more mistakes every day. Their karmic burden grows bigger and this ultimately starts to show on their aura.

Being around these people is not pleasant although there might be a charming effect.

Have you met a Bad Witch?