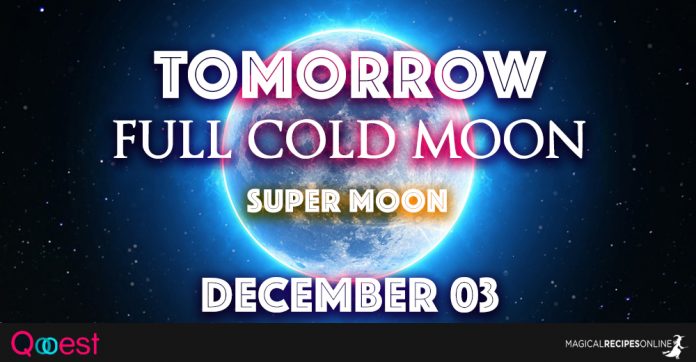 General Predictions for the Full Moon in Gemini:

On December 3, at 15:48 UT the Moon from Gemini opposes the Sun in Sagittarius, forming the last Full Moon of the year. Even more, this is a Super Moon, too, and a very interesting Full Moon altogether.

The major aspects that ruled over the waxing Moon are still strong. These are the conjunction between Mercury and Saturn and their hexagons with Mars. More information about this synergy of aspects you can find in the New Moon’s article. The way it affects us during the waning Moon will be almost the same. The main difference is that since the day of the Full Moon, Mercury will be in retrograde motion. This will have both positive and negative effects.

From now on, when Mercury is stressed by the Moon, our judgement will be clouded. Delays in our plans and – stupid or not – obstacles may make our progress more difficult. On the other hand, wishes we had had for long time, now may manifest. Or start manifesting. Sometimes, even in surprising ways. Sometimes, even rapidly. Spells we’ve cast and we haven’t seen results, now it is possible to give their results.

For the singles, finding their soulmate is rather possible, especially after the 12th of the month and until the 20th, two days after the next New Moon. This happens because Venus joins the game and it will conjunct the retrograde Mercury.

Venus has entered Sagittarius and will remain there for the whole waning Moon. Now, common interests, mental compatibility, wittiness and qualities like those are more seductive than sexual compatibility. From the tenth of the month sex will regain some ground, though. Also, finding your partner in places of studying, groups of similar minded people, seminars, and classes of any kind is favoured. On that note, www.Qooest.com can become very helpful for the singles, then.

Even if you are in a relationship, spending time out of the bed with your significant one will be more important than the time you spend together in the bed. Relationships between people who share common interests and between people who admire each other for their brains, will become deeper and better.

Mars entering Scorpio on the 9th of the month will give sexual attractiveness a new importance for what is needed both for a new relationship and for bettering an existing one. From the 16th of the month, two days before the New Moon, this will become even more clear for everybody, as Mars will start forming a conjunction with Jupiter. Until then, this aspect will be felt mostly by those who have a strong Mars or Scorpio in their natal chart. Those born under the sign of Aries, those having their ascendant in Aries, or those having a very strong Aries in their natal chart, too. In a more calm way the same goes for Taurus and Cancer. Also, men seeking men and men in relationship with men will start feeling this influence from the 9th of the month.

Publications and promotion of books and authors are very strong during the whole period. From the 9th of the month, romance and erotica books and authors will receive some extra help. This influence will continue until Saturn enters Capricorn on December 20th. But Jupiter will keep supporting the creativity on the subjects until the end of January 2018. Of course, as we’ve seen in Jupiter in Scorpio, all these offer extra focus and blessings to what Jupiter will continue doing the whole time it is in Scorpio.

Health in general, and sexual health in particular become more important now. Supporting your good health and enhancing your healing through spiritual means will be very strong from the 9th of the month. Pay some extra attention to your bodies messages, as well as your diet and habits. Also be a extra safe in sex.

The Magic of the Full Moon:

Chiron turns in direct motion on the fifth of the month. This makes things simpler and better. First of all, it makes retrograde Mercury’s influences calmer, as there won’t be may retrograde planets. It also brings more pleasant lessons and more karmic blessings. And finally, Saturn’s stress is reduced, as Chiron is still stressing Saturn.

Pluto is also strong during this period. It only gets stronger. Uranus is also very strong. Neptune is also strong and will become slightly stronger during the waning Moon. Much more during the next lunar circle. Under these circumstances, all magic is strong during the waning moon. It will only become stronger day by day. Meditative techniques will lose a little of their power after the 14th of the month, but they will remain very strong regardless. So work your magic in any possible way you want. Wish manifestation, of course, will remain the most promising magic.

For the predictions for each zodiac sign click here. Also, do refer to the New Moon’s article, as the strongest aspects are the same and there is just a slight sift of focus and balance.

That’s all for now. Have fun and enjoy this Full Moon and this very magical waning Moon.