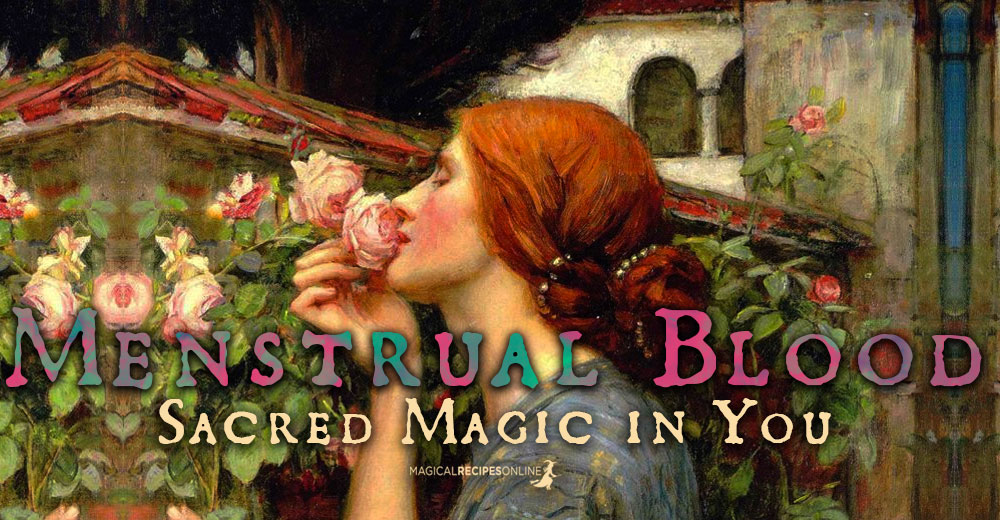 Every Woman is a Witch! Menstruation or Menstrual Blood, also known as ‘period’, is the regular discharge of blood  from the uterus through the vagina. The word ‘Menstrual’ derives from the Green “μήνας”  and the Latin ‘mensis’ which actually means ‘month’. It is extremely interesting that the average length of the human menstrual cycle is similar to that of the lunar cycle. This is why Women and the Great Goddess have always been associated with the Moon and its Powers. Let me remind you, that the oldest calendars are based on the Lunar Circle.

In the ancient times, the first menstrual blood was a sign that a girl was attuning with the Great Goddess. The Menstrual Blood is an omen of the Goddess’s blood of immortality. It’s carrier of Life coming directly from its Source, the Great Goddess. A sign of Fertility, a sign of creativity and true Magic.

You can actually tap into its power once you understand that:

I repeat. When Menstruating, you are entering the phase of your Greatest Magical Power – the Greatest Mysteries. The Time that equals with the New Moon, the darkest of Nights drenched in infinite possibilities. This is who you become!

Uses of Menstruation in Spells and Rituals:

Menstrual Blood is used for many magical causes. It is believed to be the link with the Great Goddess. One of the most powerful magical tools. Therefore, it is used to the following reasons.

DISCLAIMER: Drinking your Menstrual Blood might be an unsafe practice. Blood is rich in iron and it can cause digestive problems and diarrhoea. Moreover, blood is a material to cultivate almost all bacteria and viruses. Hence is can give you all kinds of infections. Drinking another’s Blood may also infect you with diseases (HIV virus, hepatitis etc). Ask your medical doctor if you plan to try it.

Coming up… simple ways to use Menstrual Blood in your Everyday Magic!