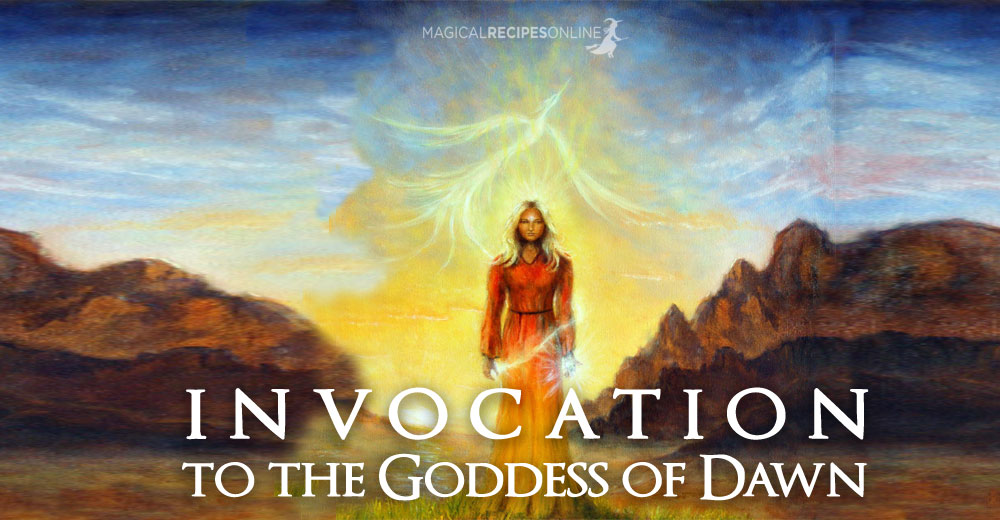 An Invocation to the Goddess of Dawn

Inspired with loving thoughts this day to greet thee, we and our wealthy nobles have awakened.

Show yourselves fruitful, Dawns, as ye are rising. Preserve us evermore, ye Gods, with blessings.

This is the 5th verse of the Hymn 7,78 of Rig Veda, the collection of Vedic (= ancient Sanskrit) hymns and the earliest manifestation of ancient Indian religion. Rig Veda means approximately “the praising knowledge” and is generally assumed to have been compiled by the middle of the second millennium BCE.

The main deities that are exalted in Rig Veda are masculine, like the God of Fire Agni and the powerful Indra. Dawn is called Ushas and she is the main goddess of the most ancient Indian pantheon.  Her name is associated with an Indo-European verb that meant ‘glow (red), flame’. The Latin word for ‘gold’ (aurum) is a cognate of the same origin, according to linguists. In Greek and Roman mythologies, the Dawn goddesses are called Eos and Aurora respectively. Their names and their cult similarly sprout from the Indo-European (the so-called “Aryan” tradition, the designation however should not be interpreted on racial but on cultural terms).

In Homer, the Greek deity Eos is described as “rose-fingered”, a metaphor that refers to her spreading rays of reddish light. She is the sister of god Helios ‘Sun’ and goddess Selene ‘Moon’. She is the one that gives birth to all stars and planets and her tears create the morning dew, personified as Ersa or Herse (Ovid, Metamorphoses 13.621-2). Dawn brings the Morning Star, the Eosphoros (or Lucifer in Latin). Similarly, in Rig Veda she disperses the darkness and is the bringer of Light and the chaser of Demons.

Both in Greek and in Ancient Indian mythology, the Dawn Goddess is depicted as a girl who is not shy of displaying her beauty and seeks for the most handsome lovers. As we read on this great page:

“Eos had an unquenchable desire for handsome young men, some say as the result of a curse laid upon her by the goddess Aphrodite. Her lovers included Orion, Phaethon, Kephalos (Cephalus) and Tithonos (Tithonus), three of which she ravished away to distant lands. The Trojan prince Tithonos became her official consort. When the goddess petitioned Zeus for his immortality, she neglected also to request eternal youth. In time he shrivelled up by old age and transformed into a grasshopper.”

Like a girl proud of her body you go, goddess, to the god who desires you

a smiling young woman, shining forth from the east you bare your breasts.

Good-looking, like a young woman adorned by her mother, you bare your body for

A crucial attribute of Dawn in all traditions is her eternal youth and beauty that never weathers. Sadly, yet inevitably, her daily appearance is also a manifestation of our mortality. This is a process we can not reverse. Still, what we could do is to invoke the spiritual power of Dawn in order to gain this energy both for our body and our soul.

What should you then do for getting the bless of Dawn? The following steps are in fact essential:

The day before the invocation of Dawn try to clean your body and your spirit. Don’t drink alcohol and avoid red meat, since this nutrition causes tension. Try not to involve to a sexual intercourse. This may sound inconsistent with the fact the Dawn Goddess is related to sexuality. But this is exactly the reason. Keep your sexual energy and desire alive, and share it with Dawn. Τhis will then further enhance it in a spiritual and physical way.

Select a place where you can freely and easily stand without getting distracted. A hill or a mountain slope with view to the East would be ideal. It is of course significant that you can see the rise of Dawn from the very beginning. It goes without saying that you should select a morning when the sky will be cloudless or at least when Dawn will be visible for sure. Get yourself some incense or rose sticks as well as rosewater (remember, we are going to invoke the rose-fingered Goddess).

At the day you have selected, go to spot you want to stand at least one hour earlier before the rise of the sun. Ideally everything gets started at the crack of dawn, namely the beginning of Twilight. Wear some nice dress or bright trousers with bright colors (or something similar). Light the incense and spread the rosewater around you. It would be great if you would be with your partner.

Mediate for a while. Just before the sunrise, recite a spell dedicated to Dawn. You can choose a hymn from Rig Veda that you can find here (just go through the various books and hymns) or you can recite the following short spell that incorporates element of the ancient hymns:

“Rose-fingered Dawn with your countless names, bringer of Light, mother of the Morning Star, dispel the darkness and spread upon us your eternal beauty and youth”.

PREVIOUSWhy are we Afraid of the Dark & 3 Reasons to Love it!
NEXTMagical Lucky Box Spell