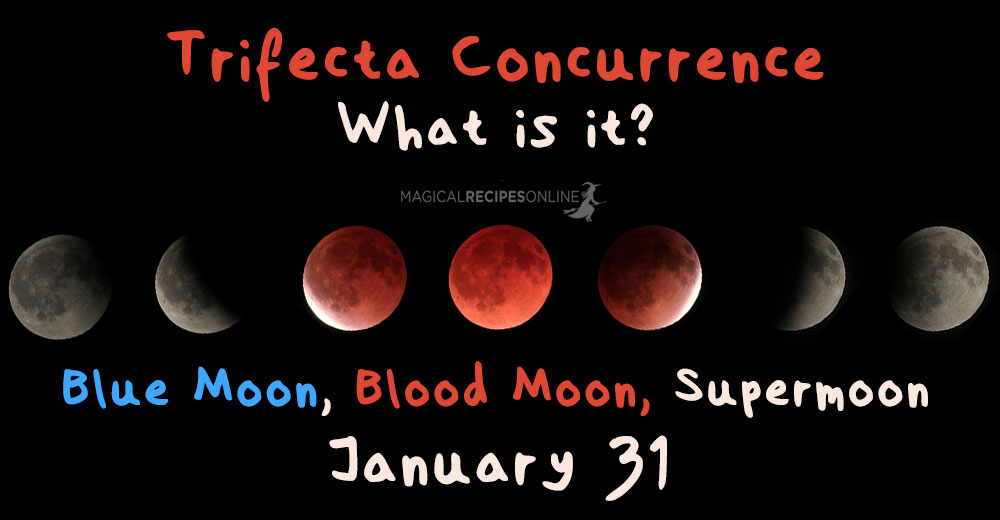 A few days ago I read on article that described the Blue Moon, Super moon and Lunar Eclipse as the “Trifecta Concurrence“, the name has stuck with me, so I have decided to use this name here in this article. If I either remember the name of the site, or the article itself I will put a link at the end of the article.

Lets start with the definitions of Trifecta and Concurrence.
? TRIFECTA [noun] The Word Trifecta means “a bet in which the person betting forecasts the first three winner in the correct order.”
? CONCURRENCE [noun] The word Concurrence mens “a fact of two or more circumstances happening or existing at the same time.”

On the 31st January we have a series of three cosmic events happening, 1) a Blue Moon, 2) a Super Moon and 3) a Lunar Eclipse or ‘Blood Moon’, so by definition the Trifecta Concurrence describes the forecast series of three events that will be happening at the same time.

To be technical, there are a few definitions of what a “Blue Moon” is, and then there is a modern definition of the term, so lets start there.

The term we know well, and is widely accepted. The Blue Moon is when there is 2 Full Moons in any single month – where there is a Full Moon at the start and the end of the month. The Full Moon on 31st July is such a Moon. The average span between 2 Full Moon is about 29.5 days (this is only on average, sometimes it’s more, sometimes it is less. It depends of the Moon’s position in relation to the earth and their respective orbits.) This terms is said to have derived from a misunderstanding in the ‘Maine Farmer’s Almanac’ – where it stated “the blue moon is the third moon in a season that has four full moons.” The reason why the third moon is chosen to be identified is very long, and very complex, and it has to do with the Christian Ecclesiastical Calendar….

Long story, and it fries my brains trying to understand it, however, I will try to make it easy to understand. 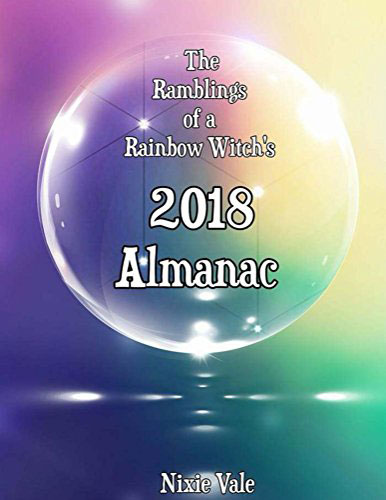 Get the Rainbow Witch’s Almanac for 2018 – HERE

Some years have 13 full moons instead of 12, but this pesky 13th moon would throw off the Christian Ecclesiastical Calendar – because it only have names for the 12 moons – so, by naming this 13th moon the Blue Moon, they were able to stay on track.

So, how does this relate to the term “Once in a Blue Moon?” Over the next 2 decade there will be a fair amount of both kinds of Blue Moons. January 31st 2018 is the second Full Moon in the month of January.

There is a rare phenomenon where there are 2 Blue Moons in January (2nd and 31st) and in March (2nd and 31st). This occurs because there is no Full Moon in February (the average span between full moons is 29.5 days, if a full moon occurs at the end of January, it’s possible for the next full moon to skip February entirely and fall in the beginning of March). These tend to happen every 19 years. The last time this happened was in 1999 which happens again in 2018, and not again until 2027.

The Blue Moon holds double the potency of the other Full Moon’s in the year, so if you are looking for long term results, cast spells, or make wishes during a Blue Moon.

The Short answer is no, and unless there is a volcanic eruption or massive wild fires the likelihood of seeing an actual blue moon is very, very, very slim. Either way it is a powerful magical event will will be made all the more powerful by the addition of the Lunar Eclipse/Blood Moon and the Super Moon.

From the Earth we experience three distinct kinds of Lunar eclipses; penumbral, partial and Total.

Blood Moons are always special events to work with, and many witches work closely with their energy, and they are extremely beneficial when you are performing Spiritual practices. Eclipses are known as times where you should refrain from long or unnecessary journeys, and if you have to travel, you have to be vigilant and alert at all times.

The energy of the Lunar Eclipse can start to come into “play” 2 to 3 days before, and after the eclipse, so it is very much like the Full Moon. Some people are more sensitive to this kind of energy that others, and I don’t just mean Empaths, however Empaths have been strongly affected, and need to take the appropriate precautions to counter this. The energy of a Lunar Eclipse has a potent energy, and as the realm of emotions is ruled by the Moon, you could find yourself swinging blindly from one emotional state to another, and because of this, you can find mishaps happening more easily and more frequently.

Therefore, during the Blood Moon it is important to be mindful of your thoughts, your words and your actions. Remember, that your thoughts have real power, and they can change your view of the world, and maybe even the Universe as a whole.

During an Eclipse, whether Solar or Lunar, it is a great time to pull your consciousness inwards, and focus on spiritual endeavours and explorations. You can add to the Cosmic Consciousness and add your beneficial energy to all of the Universe’s creatures.

A Super Moon is when the Full Moon happens to coincide at the time when the Moon is closest to the earth, this is known as the Moon being in Perigee. The Moon doesn’t have a circular orbit and the distance it has from Earth differs slightly, and the Super Moon on 31st January will be the closest, and the brightest of the Super moons in 2018. It’s not just the Moon’s eliptical path means that not every Moon will be a Super Moon because as the Earth orbits the Sun,it will change orientation which has an effect on how the Moon orbits the Earth. on the 31st the Moon will reach it’s height at 09:54 GMT as the Moon reaches it’s Zenith at 13:27 GMT and the Lunar Eclipse will be at it’s greatest at 13:29 GMT.

The literal definition of a Super Moon is when the central part of the Moon is less than 223,694 miles from the centre of the earth. Even though we use the term “Super Moon” it isn’t a technical or official term, rather it was coined in 1979. There is no hard and fast rules about how far or near the moon will have to be to be classed as a Super Moon.

What happens during a Super Moon?

? The Moon will look bigger and brighter- As the Moon is closer to the Earth it makes sense that it would appear different. A Super Moon will look between 16% and 30% bigger and brighter than a standard Moon.
? Best Sightseeing – The best time to see a Super Moon is just after Moon-rise while the Moon is still close to the horizon, it will appear much bigger and much brighter at this time, and this is called Moon Illusion, because the Moon may not be closer to the Earth, but it sure looks like it.
? Higher Tides – The Moon has a pull on the tides, and during a Super Moon you could witness up to 5cm higher tides.