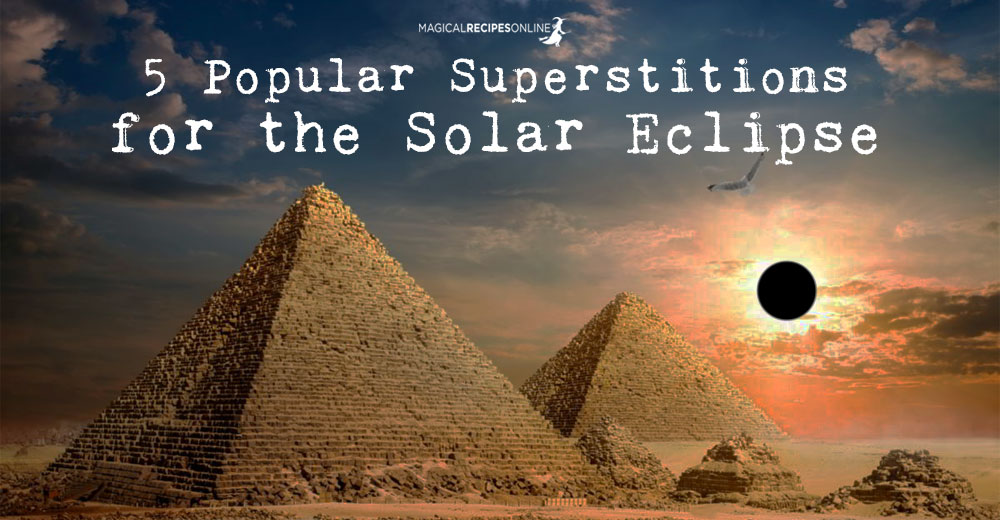 A Solar Eclipse, especially for the ancient people caused much fear and anxiety. Many speculations have risen due to this phenomenon, which as we already discussed radiates both magic and affects physical phenomena both on humans and on animals. Hence, there is no surprise that Superstitions for the Solar Eclipse have been created over the centuries. Some are still quite potent. Let’s see why…

5 Superstitions for the Solar Eclipse

Before we begin explaining these ancient beliefs we should probably start by reminding you what the Sun symbolizes. For the Ancient Ones, the Sun is the source of all life, the source of the Ultimate Power, the God personified. Sun is Magic, Sun is Power, Life and Awareness.

When the Sun disappears the Ancient Ones believed (and of course we do still believe but in a different way) that all the above may actually be affected. Also, Superstitions for the Solar Eclipse are quite sexist as the Sun also symbolizes Patriarchy and the Masculine power. Lets begin with the Superstitions for the Solar Eclipse explaining bit by bit what these beliefs still have so much power.

This is actually more than Superstition as it plays significant role for many Religions like Hinduism and the ancient Egyptian one.

According to Hinduism, the ‘Demons’ Rahu and Ketu actually chase to devour the Sun and the Moon as a revenge. During the Eclipse the Demons actually manage to devour either the Sun or the Moon but the thing is that they cannot hold them for long. This is why they re-emerge.

Same thing applies in Egypt. Apophis (Apep) is the God of Evil and Destruction. He chases the Sun but never can actually defeat Ra. However, some times Apep actually tries to devour the sun-disc – causing the eclipse – although he never completely succeed. In some stories the Good Gods unite against Apophis who banish them but cannot defeat him entirely.

According to Alchemists the Light of the Sun is the Power of Life. Eclipse brings out a change – a hard reset. This may indeed result to fights and alertness.

It is believed that the Eclipse is extremely dangerous time for pregnant women as it can mess up with everything. Although, there are no documented facts about this relation many pregnant women around the World still avoid going out during the eclipse.

According to Astrology, a Solar Eclipse may indeed bring very shocking events which can actually change the way of our living.

The Darkness of the Solar Eclipse symbolizes the end of a dynasty. Many believe that during a total eclipse an King/Queen may day and/or be succeed by another. 1133AD’s Solar Eclipse became known as King Henry’s Eclipse, as Henry I died shortly after it.

According to astrologers, Eclipses bring changes and if we are not prepared enough, catastrophes can indeed happen.

4. Natural Catastrophes and other Disasters

When the Darkness of the Solar Eclipse falls down on a land, bad news are coming. In fact the countries where Eclipses is visible are the ones mostly affected.

According to the Ancient art of Astrology, the Darkness of the Eclipse causes changes in nature which can actually bring earthquakes and other natural phenomena.

During the time of an Eclipse (and maybe because of the no1 superstition) Evil is one the loose. Natural traps which keep evil caged, are powerless helping evil forces mess with us – at least for a while.

According to Witches, Eclipses are portals of Powerful energy. Due to this fact, many (Good and Evil) Witches try to tap into this power unleashing powerful forces.