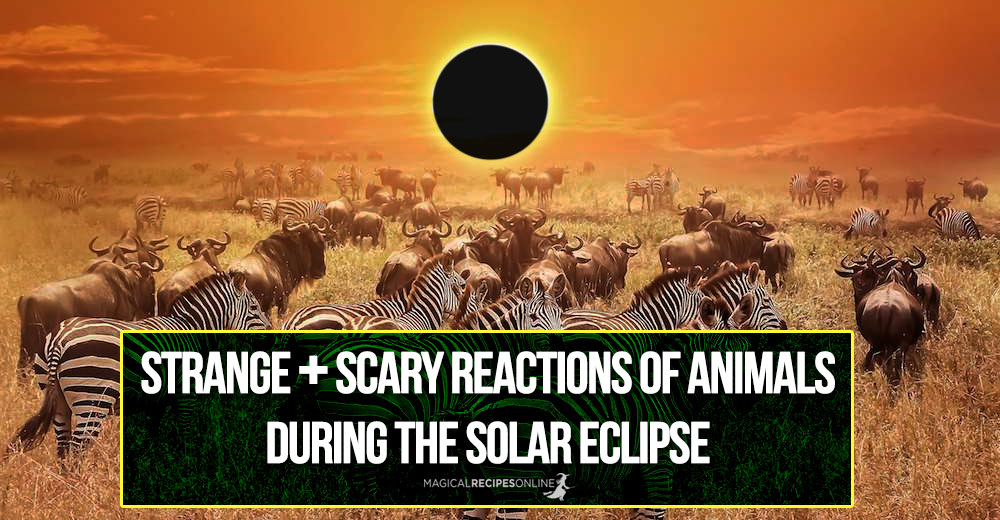 A total solar eclipse occurs when the New Moon comes between the Sun and Earth and casts the darkest part of its shadow, the umbra, on Earth. This is not a common phenomenon and neither humans nor animals reactions are easily predictable.

During the Solar Eclipse nothing feels normal

If it happens to experience the magic of the Solar Eclipse you will definitely feel that something is “wrong” with nature. Everything seems to go mad. Nothing feels normal. Moreover, if you are outdoors you will begin noticing weird stuff happening all around. The energy of the Eclipse will also affect your pets too! The Animals may act as bringers of omens! See here more about the Animals and their omens.

A word of Advice. BE EXTRA CAREFUL when you are driving during the Solar Eclipse. Animals might go mad causing several car accidents!

As we’ve already seen in the Eclipse Magic article, during this stunning phenomenon magical portals are opening and the Realms interact. If halloween is a time when the Veil of the Dead and the Living is extinguished, then the Solar Eclipse is when all Veils vanish! Therefore, it goes without saying that animals – who are more sensitive in perceiving spiritual activities – are affected!

Nocturnal Animals will feel more alive than ever. They will get violent. This happens because during the Solar Eclipse it will feel like the Night has come early. Owls will hunt during the day. Bats will go out of their caves filling the skies.

Sheep will find a place to sleep. Cows will also try to have some rest. Chicken will climb the trees like it’s already night-time.

The magic of the Solar Eclipse will cause so much fear to the animal kingdom that even birds will stop singing. It will feel like they sense an enemy coming.

You will also notice strange flying patterns. If you have time, observe these patterns as it will unveil secrets for your future.

Be very careful when driving during the Eclipse as – amongst other animals reactions – frogs might act strangely and dangerously. Due to the change of electromagnetic field, they might jump all over the streets causing accidents.

Butterflies will be disorientated. Darkness will affect the way butterflies fly. This happens because they use the light for navigation. This may also cause “a storm of butterflies” manifest as butterflies will try to “communicate” with each other as if a storm is coming. This is one of the most scary and beautiful phenomena I’ve ever experienced.

Dogs will bark – and wolves will howl – all the time.

It’s no secret that Dogs and Wolves are very sensitive to magical activity. They sense the changes. Dogs sense the earthquakes and so they also sense the Eclipses. Even before the eclipse starts, you will notice an unusual behaviour. Most of the times they are scared, barking all the time like a stranger is on the house. Some other times they become violent like their end is approaching. If you live near Mountains wolves may approach your house acting strangely.

Cats will sense the Magic

Amongst the most interesting of the animals reactions are those of the cats. They are extremely sensitive to almost the slightest change of energy around them. Hence they will might act in a very strange way. There are numerous accounts of paranormal reactions or magical abilities manifested by cats during the eclipse. Of course, this is not common but it’s worth noticing your cat, during the time of the Total Eclipse.

Black Moon Lilith in Houses - Where is your Black hole?
Free Shipping
Free shipping for orders over $100
Support 24/7
We support 24 hours a day by email
Payment Secure
We ensure secure payment