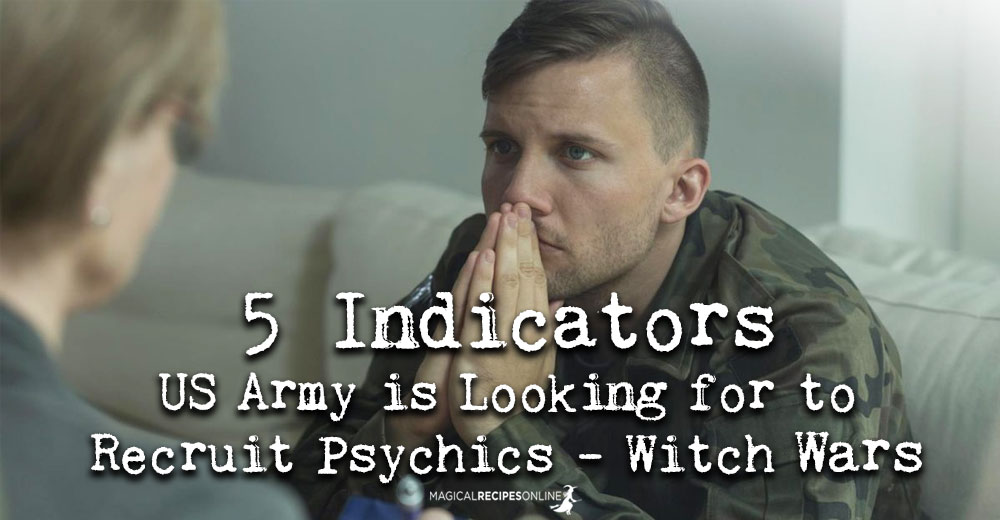 Is the US Army looking to recruit Psychics? You might have been surprised by the title of the Article but it’s true. And here you will find if you would be targeted by the US intelligence as a possible witchy collaborator.

US Looking to Recruit Psychic is documented

When the World War 2 was ended, the allies were surprised (or not so much surprised) by the extend of the Nazis involvement in the Occult Arts. In 1945, US elite intelligence agency called “Operation Alsos” went out for hunting precious information about all the experiments and the achievements of Nazis – which have been secret. And there were a lot of experiments!

Somewhere outside Berlin, the allies found a treasure of secret Nazi documents. This is when they started to decipher the dark riddles of Ahnenerbe, Heimlich Himmler’s secret organization. Nazi Elite who were members of this organization was literally obsessed to search and possess magical objects, enchanted artifacts and sacred or occult texts.

Annie Jacobsen, a journalist who published on March 2017 “Phenomena: The Secret History of the U.S. Government’s Investigations Into Extrasensory Perception and Psychokinesis” did explain that “In that organization there was E.S.P, psychokinesis, map-dowsing, an element of what you could say was the supernatural, or the paranormal”. Why would the US intelligence was interested? Because they did acknowledge the importance of the Paranormal: “responsibility of the Defense Department and CIA is to be aware of what the enemy is working on and to create programs to counter it”.

Do you think that was all in the past? You’re mistaken. As we’ve already informed you, project Stargate was pretty serious stuff. And we’re not done with it. Annie Jacobsen published that a nearly 3.9 million dollar project tries to deepen the US intelligence knowledge on occult staff like precognition. “Presently, the Office of Naval Research calls this program Anomalous Mental Cognition”.

Don’t be mistake, Witch Wars are still present raveling our world. And as always, in wars, unforgivable crimes are made. In this case, demons and other dark powers are being summoned to assist all armies. Little do they know though, that’s you lost by the time you summoned these forces. But lets go back to our subject. Modern Witch Wars work like all jobs. Now the intelligence offices require you to have the following qualities!

Indicators US Army is Looking to Recruit Psychics

This is probably one of the most important qualities US intelligence is looking to find. One who never gives up is one who is driven by his/her mighty spirit. Moreover, during his/her training one needs to continue trying until s/he succeeds.

This is one who no matter his/her religious or national background, is free to explore new things. Furthermore, this person can reach and explore his/her limits – something the US needs. S/he is Willing to learn more. This individual is the one who is willing to transcend the boundaries of this education and be able to discuss further approaches.

3. Successful against all odds

If someone succeeds in all tasks there is something odd about this person. How can s/he keep winning? US army needs that.

The US army is looking to recruit psychics who are not afraid to get what they want. One who is close to his/her heart is the one who is able to get power from his/her instincts and from there springs the most powerful sources of magic.

Being a freak finally pays off! US army is looking for people others recognize as ‘freaks’ or ‘weirdos’ as they actually dare to work outside norms. These are the ones who are considered most successful in these projects.