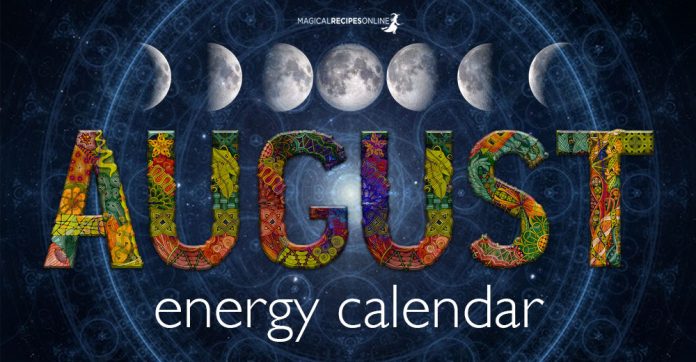 We have had quite an intense month in July and with August comes a refreshing energy. The month starts with Lughnasadh in the Northern Hemisphere and Imbolc in the Southern Hemisphere which is bringing in a calmer energy than previous weeks but the shift after the last Full Moon and the Eclipse has meant some people are having withdrawl-like symptoms. Let’s take a look at August’s Energy Calendar.

The Full Moon names for August are:

* Sioux Native American – The Moon When All Things Ripen

– The Month of the Horse Ends – Celtic Animal Zodiac

– The Month of the Fish Begins – Celtic Animal Zodiac

– The Month of the Salmon Ends – Native American Zodiac

– The Month of the Bear Begins – Native American Zodiac

All of the times listed above are UTC or Universal Coordinated Time. To find out what the times are in your part of the world, go to www.timeanddate.com and type in your hometown.