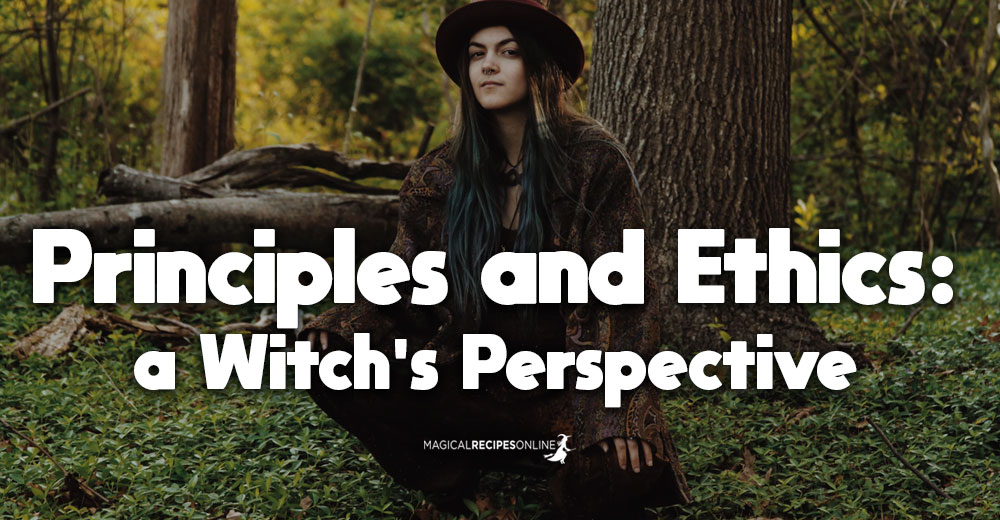 In magical Ethics, there is a principle called the Law of Threefold Return. This belief states that whatever you send out is returned to you threefold. Actually, this is just a fancy way of saying that your actions have consequences , and will always return to you in the end – for good or for bad. Teaching you that you have to think before you speak and act.

This is a principle that many in the craft quote for the benefit of the media and the wider reading/viewing public, as a way to disperse myths about those who ‘abuse’ their power to send out curses and harm others.

After all, what witch would send something out when it would come back at them three times more powerful than what they sent out in the first place? It is a common sense way of alerting people to the consequences of each of their actions, and reminding them to pause before making a decision on a course of action.

Okay, this isn’t a hard and fast “law”. That what you send out will literally come back to you. So, if I was to send Tammie a bunch of flowers, it doesn’t mean I will get 3 bunches of flowers in return. However, the kindness in the actual act of giving Tammie the flowers, makes the world a slightly kinder place, even if it is almost microscopic, and it is returned to me with the knowledge form that small act I made someone, Tammie in this case happier.

At its heart the “law” of return is a spiritual truth and an ethical guideline.

There seem to be a few “laws” spinning around out there in occult circles, and each claim to be the ‘definitive’ three, seven or nine laws of magic. Firstly, they are not definitive, secondly, some of them are nonsense, thirdly the most sensible of them all boil down to the same thing HARM NONE!

You can’t change the will of another, and you should not aspire to even try. The ONLY will you can work on is your won. Many witches and other practitioners tend to listen and ask questions of the person seeking help, then they reflect and ask questions of themselves, before acting. We need to ask questions and listen, to learn all we can, so we can best decide on the right and fair course of action.

Scenario: – A person comes to you and asks you to curse their cruel and unfair boss.

It is unethical to just go ahead and curse the persons boss, as you are not fully aware of the whole situation. However, you can advise them to seek legal help and help them to heal and overcome the effect of the bullying they have suffered.

Now, I am not a believer in the Wiccan Rede, and I don’t have a great belief in Karma or the Law of Three, but I do believe that we are all accountable for our thoughts, feelings, and actions and we have to own them and take responsibility when needed. This is a piece explaining principles and magical ethics of the Craft, how you wish to interpret them is up to you.

PREVIOUSGo Smudge Yourself to Free Yourself
NEXTDiscover the patterns of your Spirit: A Sacred Geometry Test