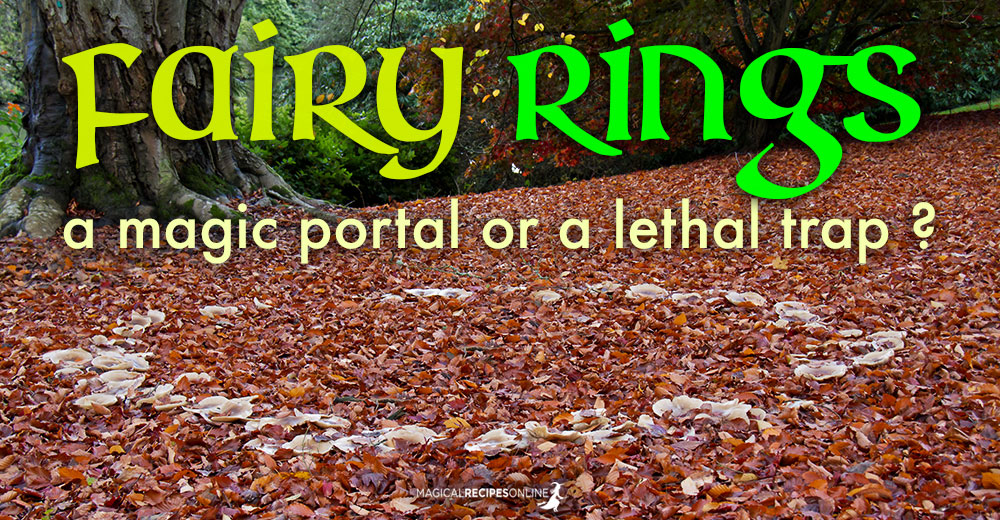 Imagine you wake up in a beautiful morning and while strolling through the lawn or the woods you daily visit you encounter an arc or even a perfect circle shaped by mushrooms. In the middle no further mushrooms have popped up, whereas the way the little fungi stand seem to have been arranged by an invisible hand overnight.

Well, since nature favors asymmetry over regular geometrical shapes of that kind it can reasonably make us wonder how these mushroom rings appear at once. In many traditions, especially in the West European folklore, the mushroom rings are usually called Fairy Rings and this designation speaks for itself: Folks in the past believed that these formations were nothing but the job of supernatural creatures, either benevolent or malevolent.

Naming these rings is a long tradition that also indicates how people in the past interpreted their occurrence. They were the “Sorcerers’ Rings” in France. Germans called them “Witches Rings” and, as the Ancient Origin’s article informs us, they believed that witches gathered within the rings to celebrate the (Saint) Walpurgis Night – Beltane’s eve on the night of 30 April and the day of 1 May[1]. Fairy Rings also come up with names such as fairy circles, elf circles, elf rings or pixie rings.

Ancient beliefs & the Science behind

As we said, calling circles of mushrooms “fairy rings” is quite revealing about the fact that these were linked to the activity of fairies or other non-human entities. Fairies were supposed to dance around the rings. Others considered them to be portals or gates to a fairy world. Austrian legends referred to the burning tails of furious dragons that burnt the soil they touched so that only toadstools could grow. For Frenchmen, giant toads guarded the rings and everyone entering them would be cursed.

But in fact, until the 20th c. it was in Wales and Scotland where Fairy Rings largely incited the imagination. The rings were landmarks indicating underground villages of fairies. Fairies were dancing in circles underground, causing toadstools to pop up. Some were saying that mushrooms were the tables of fairies’ banquets. In fact, the various “superstitions”, traditions and the lore about fairy rings are abundant and fairly fascinating.

Scientists were quite puzzled with the phenomenon but nowadays they can readily explain it. As described in Garden Collage:

Science tells us that fairy rings– or patterns of certain types of mushrooms that grow in circular formations– are naturally-occurring phenomenon that usually appear year after year on lawns, in fields, and in forests. Fairy rings occur when a mushroom spore falls in a favorable spot, grows a mycelium (the vegetative part of a fungus), and spreads out an underground network of fine, tubular threads called hyphae.

Mushroom caps then appear at the edges of this network. The formations continue to expand outward, using up all the nutrients within them as they grow larger. A ring found in Belfort, France– the largest ever seen– measures approximately 2,000 feet in diameter and is an astounding 700 years old. 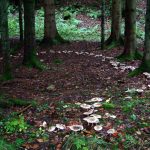 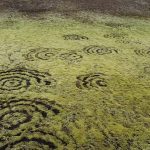 In most folklore tales, fairy rings are regarded as “dangerous” places that one should avoid. As the Wikipedia article reports, a traditional Scottish rhyme underscored the perilousness of these places:

He wha tills the fairies’ green

And he wha spills the fairies’ ring

Betide him want and wae.

For weirdless days and weary nights

Are his till his deein’ day.

But he wha gaes by the fairy ring,

Nae dule nor pine shall see,

And he wha cleans the fairy ring

An easy death shall dee 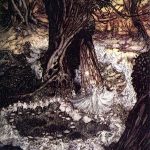 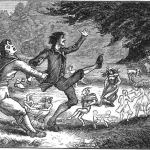 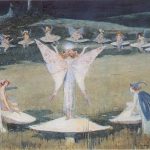 Their strategy to remain safe would be to wear their hat the other way around. They could also be given to cast wild marjoram and thyme into the circle and bewilder the fairies. Other strategies to avoid the enchantment or the curse of the fairies was to run nine times around the ring or to run under the moonlight in the direction in which sun travels during the day. By doing so you could hear the fairies dancing underground. So, like Ulysses enjoyed the alluring song of Sirens by letting his sailors tying him on the mast of their ship, they would also have access to a forbidden realm. Temptation is always attractive.

Yet, fairy rings were not always considered a trap but also a bless. Meadows and lawns hosting a fairy ring were seen as suitable for building a house. Fairy rings were places for boosting fertility or sexual desire. Some might see in them a sign of good fortune.

Fairy rings inspired not only the lore and the oral traditions but also arts like literature or painting. Thus, William Shakespeare verbally depicts the dancing in a fairy ring in his A Midsummer Night’s Dream, Act II, Scene I: “And I serve the fairy queen, / To dew her orbs upon the green” and “To dance our ringlets to the whistling wind”. Poets such as W. H. Cummings and William Butler Yeats also referred to this phenomenon in their verses.

But also in our times, fairy rings are still sparking artistic creativity.

Close your eyes and enjoy Mike Rowland’s ethereal music composition that has sold over a million copies worldwide and is still one of the most important albums of healing music today.

Similarly, give Mary Losure’s The Fairy Ring: Or Elsie and Frances Fool the World  a try. The book is a controversial account of the story of two girls who went a long way in order to persuade everyone that fairies exist (but they do exist!). An interesting read with a charming topic.

To enter or not to enter? A Fairy Ring Ritual

Science has explained how fairy rings appear but is this a reason to claim that no magic is in play here? On the contrary, the place in which a mushroom spore (like a seed) thrives is a spot of energy. If in the woods, fairies will fancy the place. And so do we!

If toadstools have formed a perfect circle, this could provide the terrain for a lovely group ritual. Whether in woods, a lawn or a meadow, take the chance and invite 3 or more of your friends and go to that place, preferably at a warm night under the moonlight.

Gather around the ring holding white candles and wear something comfortable. Bring some nice, gentle and harmonious music with you. After you all stand with the candles, salute the fairies and offer water mixed with some honey in the centre of the ring. Then play the melody and dance around in a joyful manner.

Do not step inside. Inside the circle lies the “body” of a fairy ring, therefore you should be respectful to it. Avoid also any annoying music or anything that could disturb the fairies. You really don’t want to do that.

Nature and spirits interact with each other and this is how they manifest themselves to us. Fairy rings are not less magical because there is a scientific explanation for that. Magic is part of this world, it is also nature and it is up to us to open our eyes and see it in front of us.

[1] Actually, this date coincided with the so called Hexennacht, the “Witches’ Night”. The reasons of shifting from a Pagan to a Christian celebration on the same date are quite obvious. Clearly people associated that day with the ancient festivity.

How to spot Fairies: 12 signs when Fairies are near you

Fairies & Elves as Lovers of Mortals

PREVIOUSWhat Magic Gift was given to you according to your Birthday?
NEXTConditions & Things that Weaken our Magic