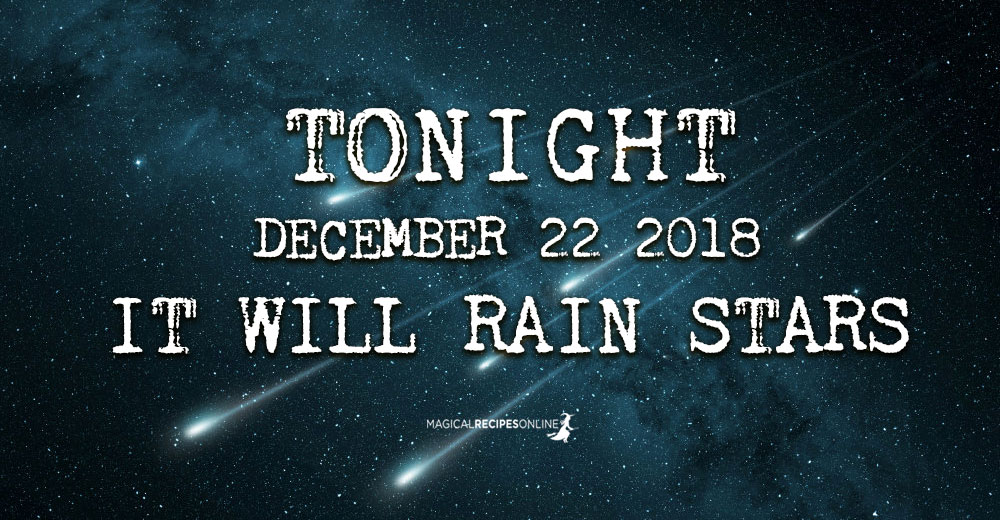 Witchcraft of the Stars has always been considered powerful and it dates back to the ancient Egypt and Mesopotamia. In fact, Star Magic is considered one of the oldest and most powerful forms of Magic. A Star Magician taps into the powers of the Stars in order to collect and direct the energy of the Stars. So let’s tap into the magic of Ursids.

One of the year’s most amazing celestial shows will peak this weekend when we will have the chance to observe the magic of shooting stars. Especially On December 22, 2018 something really rare is going to happen.

Why is the Ursids Meteor Shower so unique?

The Following night will be spectacularly illuminated by the Ursids Meteor Shower. So this will be a Night to remember. A magical night which will only be repeated after 70 years, in 2094 as it coincides with the Full Moon and the Solstice! In just few hours a marvellous phenomenon will take place in this Realm, shaking the Reality as we know it. Let’s see why!

Astronomers believe that we will enjoy about 10-15 shooting stars per hour… yet we can still hope for REAL MAGIC. Why? Because, tonight, is the Most important Night of the Year. The Druids call it the Nameless Day. The day when Anything is possible according to them. A day of Unlimited Magic Power. Also called as the ‘Feast of Potentials’ as it is believed that wishes are like seeds in a fertile soil on this day.

So this enchanting night will occur a Meteor Shower called the Ursids which will add up to the Solstice Magic with some extra Star Power. This is not just another Meteor Shower as the falling stars will seem to drop from the ‘Northern Star’, also known as Polaris, from Ursa Minor

Weather permitting, observers around the world should be able to see the brightest “Ursids” streak across the sky from Friday night through Sunday morning.

The Magic of Ursids Meteor Shower

The Northern Hemisphere will mostly be treated with the celestial prime show, as it has the best view of the constellation Ursa Minor, from which the meteor shower derives its name. Let me remind you that Polaris who belongs to the Ursa Minor and is considered one of the most important magical stars. Astrologer believe that Polaris is not just a fixed star but a harbinger of Death and Change. Witches use the power of Polaris to bring change and surpass all obstacles of the Material Realm.

Astrology: Of course, this has its own astrological significance. The Ursids Meteor shower of 2018 is a reminder that all we know is about to change. The Solstice coincides with the Full Moon, the Ursids Meteor shower and the alignment of Jupiter with Mercury. All the omens show the same things. The World is changing!