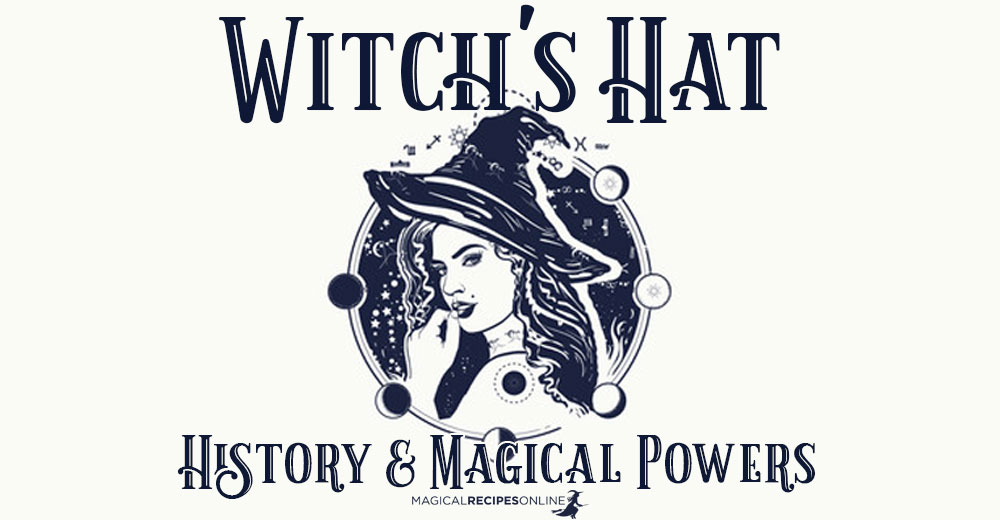 It’s very difficult to find something so stereotypical in Witchcraft as the Witch’s hat. Probably the Witch’s Broom – aka besom – or the magic wand. But s/he who wears the hat is definitely a witch in the collective subconscious. Why is it so important? Does it really have a job? Maybe the hat has some powers itself? Where does it come from? We will try to answer these questions in the following Article. So put on your hats and let us get you there.

Is Witch’s Hat actually a horn ?

This is probably one of the most possible answers to this question. The conical hat of the Witches has a long history. There are many traditions where the royals or the priests wore hats or similar accessories, especially when performing ceremonies or seen in public.

Any ritual hat, symbolically transcends this Realm, helping the wearer connect with Heavens, where the true source of power exists. In many ways, this can also be seen as a horn. There’s a reason why many horned animals (like the deer) are considered sacred.

Despite common belief, horns are sacred. Although after the reign of Abrahamic religions this was not clear or in some cases deliberately connected with evil, horns are symbols of divine power. Many – if not all – greek Gods can be seen with horns. Why? Because Ancient Greeks believed that horns are manifested symbols of Aether. Also knows as the fifth Element – or spirit – Aether flows from the temples of our heads heading upwards, where Spirit belongs. Gods are horned because their Aether is so intense and powerful we can actually see it.

Do not be surprised if you see horned Goddesses too. This modern stereotype is of course not valid in actual ancient ways. For example, in the ancient orphic hymn to the Moon Goddess, Selene we call her as  “Hear, Goddess Queen, diffusing silver light, bull-horned and wandering through the gloom of Night…”

Horns are symbols of divine power, and ritual hats try to assimilate this power.

It seems that all this Witch’s hat trend goes way back in history. There are deities associated with Witchcraft which wear hats or accessories which look like our Conical hat. For example, Tlazolteotl is an ancient Aztec deity, also known as the Goddess of witches. According to what we know she is frequently depicted riding broomsticks and wearing pointed hats, like we do. That’s not a coincidence. 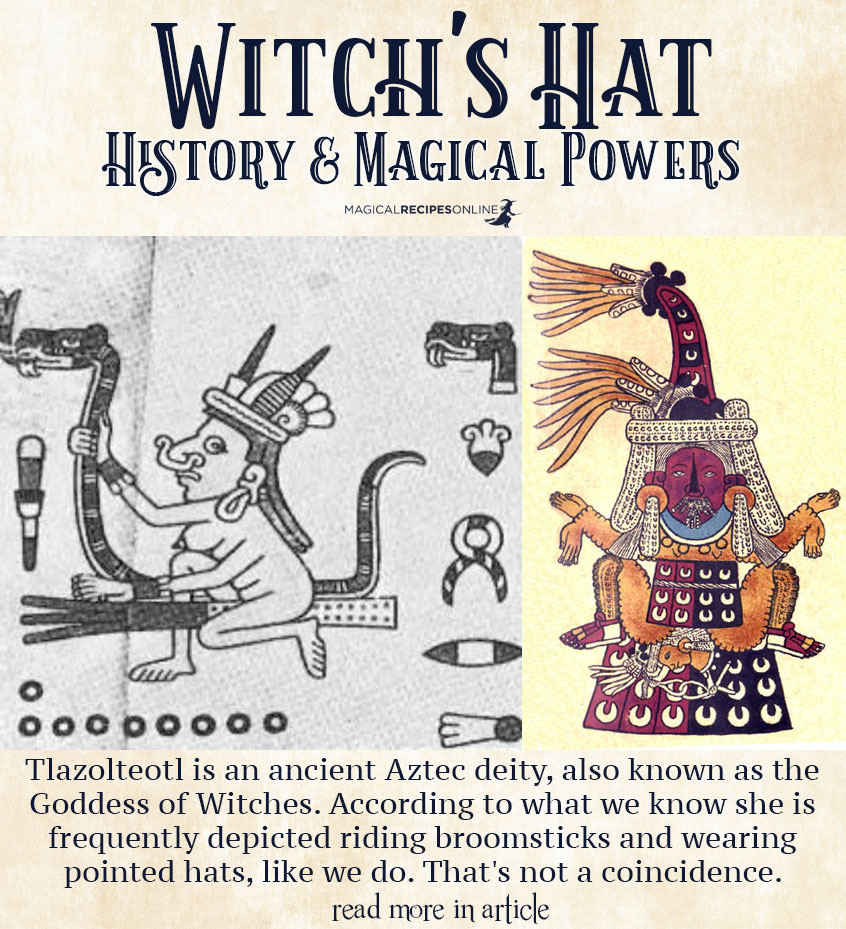 After the fall of Aztecs, their beliefs and customs spread all over the world. To what extent this happened is yet to be known. Although the connection from Aztecs to modern witches cannot be solidly documented, in many tribes, we can see a certain conical hat worn by shamans. These powerful ritualists got the power to communicate with spirits. Hat’s are believed to aid them in that purpose and their other abilities.

As with everything, there are theories even about Witch’s hat. The most common which is spread in Wicca community is that the Witch’s hat is actually a symbol of a very powerful Ritual called the Cone of Power. Although this ritual is very real and very old, there is no solid proof, that the hat is a symbol of this spell.

However, we should learn more about the Cone of Power to understand why the Hat is so powerful. The Cone of power is usually performed by the whole cover or any group of Witches. It’s when the many become one. With specific ritual dancing, exhaling and inhaling, energy is gathered in form of a Cone. This cone can be ‘sent’ to any target for any purpose the Coven decides.

Gerald Gardner, who founded the ‘Gardnerian Wicca’, as well as other historians documented a very interesting incident. Back in  World War II, british Witches members of the New Forest Coven, invited all powerful Mages, Witches and Warlocks to join a secret Operation called the Cone of Power. This would try to counter the Black Magic performed by the Nazis and shield the Great Britain from the invasion. The ritual was so exhausting that some of the members died right after the ritual.

Abilities of the Witch’s Hat

From Michey Mouse and  Harry Potter to Hocus Pocus, worn by both males and females, we’ve seen many ideas of what the Hat can do. However, the Witch’s hat is worn for the following purposes.

PREVIOUSFortuna, Goddess of Luck and how to Call her
NEXTPractical Magic – When you Want something to Happen