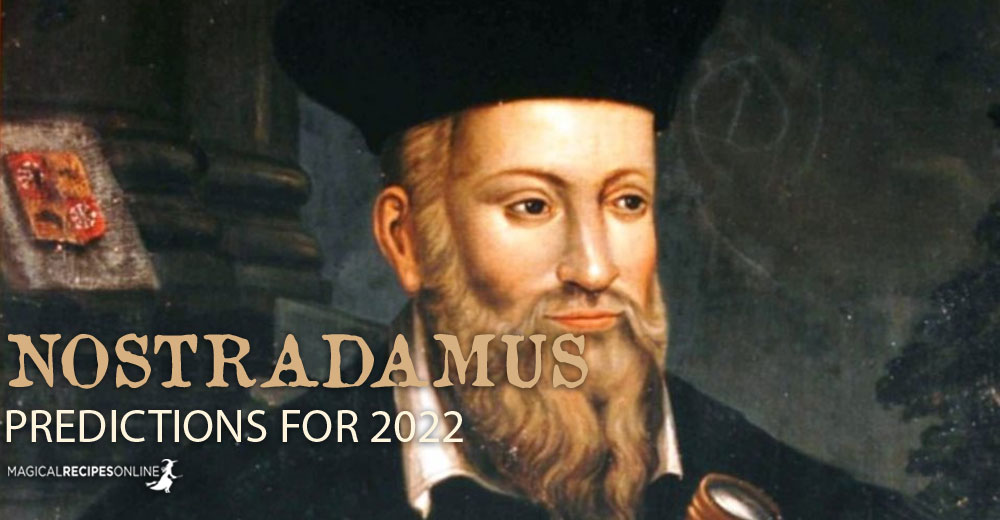 Another year is about to end, and things are getting weird again. Covid madness is again the most notorious topic. Restrictions rise again, and people are trying to cope with an inhuman way of living. At the same time, poverty and wars threaten to destabilise an already troubled world. But, hope shines anew as more people are awakened, charging magical currents, and shifting global consciousness. Let’s dive more into Nostradamus Predictions for 2022.

We have predicted a change like no other in our predictions for 2020. And we still predict that this weirdness will last, but will also give birth to hope. Right now, Jupiter in Pisces will make his best to bring all kinds of blessings and – at last – the good vibes we so desperately need!

But let’s focus on the most famous astrologer of all time. It seems that Magical Recipes Online‘s Mage and Alchemist are not the first who predicted this madness. Michel de Nostredame, born in December 1503, also known as Nostradamus, was a popular French astrologer, seer and physician. He is best known for his book Les Prophéties, a collection of 942 poetic prophecies about future events.

Although poetic, his prophecies, most of the times, make perfect sense. Nostradamus wrote what he had seen in the stars and the astral plane – probably parallel universes, too. Sometime spirits give cryptic messages. At the same time, he was an Astrologer (!!!) in medieval dark times, in the royal court, surrounded by fanatics! So yes, we can excuse some poetry from this powerful seer! So let’s see some of his predictions!

Meta-universe, Artificial intelligence and the Matrix?

“The Moon in the full of night over the high mountain /The new sage with a lone brain sees it /By his disciples invited to be immortal/Eyes to the south. Hands in bosoms, bodies in the fire.”

Elon Musk is already awarded as Time magazine’s Person of the Year. He is a pioneer for Artificial intelligence and he also believes that we already live in Matrix! Moreover, he is the one who invests billions on high-end technology which can stimulate the brain of people with impaired vision or mobility!

“So high the price of wheat/That man is stirred/His fellow man to eat in his despair.”

Expensive energy, products, delays, empty market selves… We’ve already experienced an increase in the price of energy, gas and of many, many products in the Super Markets.

“The sudden death of the first character, he will be changed and they will put another in his kingdom.”

This, of course, signals the sudden death of a VERY important figure of this world. Some assume Joe Biden, or Queen Elizabeth.

“Like the sun, the head will seal the shining sea. The live fish of the Black Sea will almost boil.”

Black sea water’s temperature is rising – most assume due to bombing and war. The famous astrologer predicted Global Warming, probably as a result of an unparalleled Solar Storm! Either way he’s spot on right?

“Sacred temples of the Roman time, will reject the foundations of their foundation.”

If not downfall, this certainly talks about a deep institutional change within Europe! Will the start of Brexit have a domino effect?